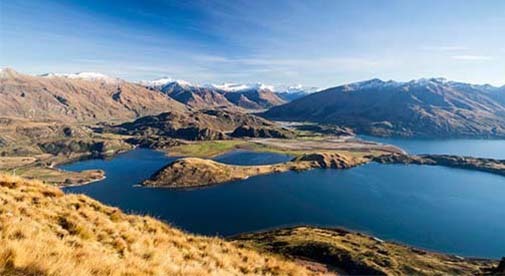 New Zealand consistently tops global health indexes—and for good reason. If your number one retirement priority is to improve your health and well-being, then I recommend you head down to New Zealand for a dose of the Kiwi lifestyle.

I can personally vouch for it; I have shed decades of city stress, along with a few excess pounds over the past few months. All you need are hiking boots and flip flops in the country where health is counted as true wealth.

Our adventure began last November, when my husband, Gary, and I sold our home and left our jobs. In our fifties, and after thirty hectic years in London, we decided to take a “Gap Year.” Our dream? To enjoy the great outdoors of New Zealand, “The Land of the Long White Cloud” by reveling in its four seasons.

This is how our year unfolded.

We found it joyous to skip a U.K. winter by arriving in springtime to Wanaka, a lakeside mountain town on the South Island. The stunning scenery and mountain vistas were a balm to our battered city senses.

Practicalities such as leasing a car, moving into a rental property and setting up a bank account took time. It also took a few months to unwind and shrug off 30 years of professional life in the city. But, we settled into local life well, connecting through yoga classes, Parkrun and community volunteering.

Then the fun began…

We hiked the Milford Track, one of nine multi-day Great Walks in New Zealand, starting at Glade Wharf (at the head of Lake Te Anau) and finishing at Milford Sound. It took us four days. We eased into hiking life by opting for the lodges with hot showers and duvets. Tucking into venison and juniper stew, we chatted to fellow hikers about the tough hike over Mackinnon Pass. Our office-weary bodies began to respond and unfurl.

In the summer, we spent more than seventy days crisscrossing the South Island on mini-adventures. But we were always thankful to come “home” to our base in Wanaka. Living out of a backpack or a motorhome has its limitations.

As keen cyclists we were thrilled to tick off 10 of the 22 multi-day Great Rides that form the New Zealand cycle network (nzcycletrail.com). Less well known than the Great Walks, these bike rides are an excellent way to explore rural New Zealand.

The Alps2Ocean was our favorite trip, starting at the base of Mount Cook with a helicopter transfer across the Tasman River. After six days and 186 miles of superb cycling, it was satisfying to dip our wheels in the Pacific Ocean and savor a beer.

Christmas in the sun was a novelty for us. Kiwis, as New Zealanders are nicknamed, love barbecuing on the beach, boating, water skiing and swimming. Golden beaches abound, mostly deserted, partly because there are just not many people around, but also because of the irritating sandflies (tip: insect repellent). We explored The Catlins National Park, and New Zealand’s third island, Stewart Island, which are both worth visiting for the sea, surf, and sightings of tiny Hector’s Dolphins and huge Albatrosses.

Autumn Gold (March to May)

In Autumn, grapevines fire up the hillsides with golden amber hues, as the Wineries of the world’s most southerly wine growing region throw open their cellar doors for Pinot tastings.

However, one of the most surprising lifestyle changes in our year was easing off alcohol. We used to enjoy a few bottles of wine at the weekend. Taking work out of the equation, and exercising outdoors so much, nudged us away from habit drinking and sleep has never felt so good.

Wanaka’s autumn colors are mesmerizing, impeccably framed by snowy peaks and azure lake reflections. I enjoyed a week’s photography course as part of the local Festival of the Arts. What a treat it was to apply my mind to a new skill so different from my professional past, although they do say that you can’t take a bad photo in Wanaka.

The highlight of the Wanaka Autumn Festival of Colour was the Royal Ballet of New Zealand, performing just a short stroll away from our home.

No need to worry about missing out on quality arts entertainment whilst living in a rural town.

We were primed for a cold winter near the Southern Ocean, a mound of logs stacked for the wood burner, and arctic duvet jackets at the ready. We waited and waited. The perennial blue skies and sunshine continued; kids biked to school in shorts, and folk kept sipping coffee on terraces.

What we were not prepared for was a remarkable feature of Wanaka winters—snow falls high up on the mountains—but down in the valley life carries on as normal, temperatures seldom dip below freezing. There aren’t many places in the world where you can ski in the morning and kayak on the lake in the afternoon, all winter long.

That doesn’t mean it doesn’t get chilly, though. Houses in New Zealand rarely have central heating but layering up with thermals and using an electric blanket for colder nights worked for us.

Cross-country skiing is popular around Wanaka, and we ended up joining the local ski club, Snow Farm NZ. We enjoyed exploring the many ski trails skimming the Pisa Mountain Range, and I learnt to cross-country ski. I even participated in an international cross-country ski race, coming first in my age category.

Cherry blossom heralded the return of spring, signaling that our year in New Zealand had come full circle. Time to return to the U.K., mission accomplished, we felt completely revitalized. It really is a struggle to decide which season was the best because together they formed the perfect kick-start to our healthy retirement.

What Visa Do I Need for New Zealand?

How Expensive Is Living In New Zealand?