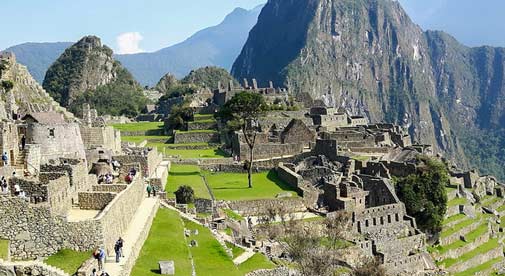 I’ve been obsessed with the Incas since my early 20s. Maybe it’s because the Inca civilization is so enigmatic. Or perhaps because I admired how they created such an impressive culture without written language, monetary system, iron, or slaves. I’d pore over photos of Machu Picchu in glossy magazines, imagining myself standing on that precipice, gazing down on the mystical citadel.

Finally, I got to Macchu Picchu. And here’s some honest observation you may not find anywhere else: It’s jammed with tourists, highly regulated, heavily guarded, and your exploration time there is limited. While it is spectacular and worth seeing, don’t make it your be-all-and-end-all.

But the Incas left behind a treasure trove of other historic sites that give a glimpse into their civilization. And the best part about these less publicized spots is that you’ll have them all to yourself.

My foray into Peru’s Sacred Valley started in Cusco, one of the oldest and most vibrant cities in the Americas. It’s home to an imposing Inca fortress, perched at 12,142 feet overlooking the old city. Constructed during the reign of Inca emperor Pachacútec, the Incas fortified the walled complex of Sacsayhuamán with massive stone boulders, cut and fit precisely together without mortar.

The Incas thought Sacsayhuamán was impregnable, but in an epic battle, Spanish conquistadors charged uphill and crushed the Inca army. If you labor to reach the top, you’ll have a keen appreciation for this extraordinary feat, not to mention stunning 360-degree views of Cusco.

Just a short walk from Chinchero’s small village, the archaeological site encompasses sweeping views of hillside terraces with a backdrop of snow-capped Cerro Chinchón. Next to the terraces is an authentic indigenous market, bursting with culture and color. Friendly vendors are decked out in dazzling, traditional Peruvian woven textiles. Just outside town is a weaver’s coop with live demonstrations. Chinchero is an easy morning visit if you want to immerse yourself in some indigenous Peruvian culture.

The Incas left a treasure trove of historic sites.

Even if you’re not an avid hiker, you’ll love Moray. A dusty dirt path winds around three circular hill-side terraces, reminiscent of Roman amphitheaters. Although no one is certain, archaeologists speculate that terraces, each with its own micro-climate, were used for experimental agriculture. Gracefully stepping down the hillside, the terraces were built in respect for Pachamama, “Mother Earth,” and blend gracefully into the terrain. Each platform created a distinct micro-climate, enabling Inca horticulturalists to grow crops not normally viable at that altitude.

If you like studying ancient cultures, Pisac has it all. It’s a combination of cascading terraces, Inca city, and stunning mountain vistas. You can even eat pachamanca with locals. It’s a traditional meal of roasted meats and vegetables (including that perennial Inca gift to world cuisine—the potato) cooked underground.

I peered up at cloud-shrouded mountains on the horizon. Heck no, I said to myself. Ancasmarca is 13,000 feet at the summit. I stuffed some coca leaves into my cheeks. The leaves are the source material for cocaine, but in their raw state, they’re legal in Peru. The effects are only mildly stimulating—a strong cup of coffee would be more noticeable. But they do help with endurance and alleviate altitude sickness.

Although the ruins are not as impressive as other Inca fortresses, the panoramic views of the distant Andes are unparalleled. And Ancasmarca has its own peculiarity: terraced rows of small circular storage houses, looking remarkably like a hillside of hatched stone eggs.

It was pouring rain the morning I left my comfy room in Ollantaytambo—one of the best-preserved pre-Columbian residential sites in Peru. It’s a labyrinth of narrow cobblestone alleys, nestled in the shadow of the towering Inca fortress, ruins, and agricultural terraces. Rain kept the crowds away, but it also made the gigantic, uneven stone steps leading up to the fortress tricky to maneuver, and definitely not for the faint of heart.

Like Sacsayhuamán, the temple was constructed from massive stones fit together without mortar. If you make it to the top, you’ll be rewarded with a bird’s-eye view of Inca terraces and the eerie, abandoned city.

Even easy hikes at high altitudes can present a challenge. This can be mitigated by natural remedies, such as taking time to get acclimated, drinking water or coca tea, replacing electrolytes, and taking frequent rests. There are also preemptive medicines for altitude sickness, such as Diamox.

For custom, authentic, and upscale Peru experiences (but without the high price tag), see Adventuresmithexplorations.com. Tours start at $475.