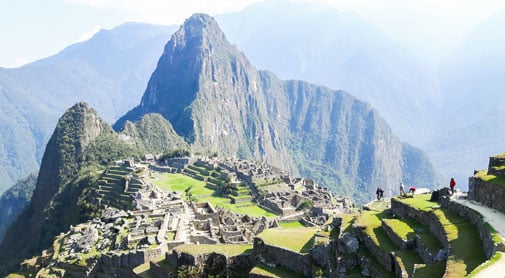 Traditions and Culture in Peru

Nothing says tourist like a chullo hat; you know those cone-shaped woven wool hats with the earflaps and ties that every visitor to Peru ends up wearing at some point during their trip. These may be world famous and help you get more clicks on your Facebook travel pics but don’t be surprised if you get a few stares from the locals. This is especially true if you decide that it makes for a good beach hat while sunbathing somewhere on the coast.

But fear not, there are other elements of the culture that will help you fit in a little better while visiting or living in this dynamic country. Whether you are here for a few days or a few years, this brief guide will set you on your way. And if you want to wear your new chullo hat, nobody will stop you. Peruvians are a friendly and tolerant group.

Peru is a country of 32 million people. Peru is a very multiethnic country and various groups have formed its population for more than 500 years. In a 2006 survey from the Instituto Nacional de Estadistica e Informatica (INEI), Peruvians self-identified as mestizo (59.5%), Quechua (22.7%), Aymara (2.7%), Amazonian (1.8%), Black/Mulatto (1.6%), white (4.9%), and other (6.7%).
Over 80% of the population is Catholic with another 12.5% identifying themselves as Protestants, mainly Evangelicals. The Peruvian government is closely allied with the Catholic Church and provides it preferential treatment in education, tax benefits, immigration of religious workers, and other areas.

Spanish is the official language of Peru, but several indigenous languages also have official status in areas where they are widely used. Once you leave the coast, Quechua is much more prevalent and therefore often quoted as Peru’s second official language.

English is not widely spoken by the majority of native citizens, but some speak more than they let on. It is always best to master the phrase, “Habla ingles?”, (Do you speak English?). It’s a good icebreaker and a friendly way to start some type of communication, even if it ends up only being charades.

If you’re moving to Peru or intend to stay for a long period, however, it’s a smart to learn the basics of Spanish. Not only will it make life easier, it’ll open a whole new world to you. 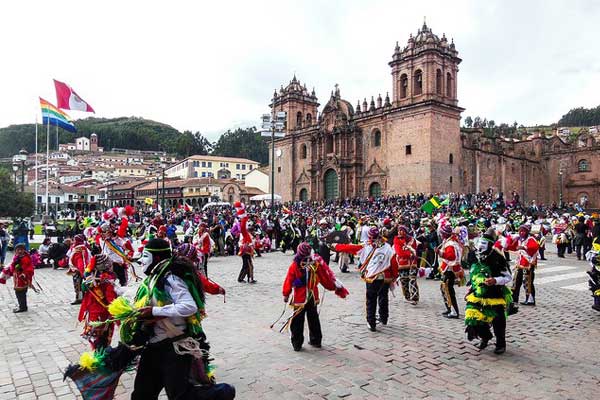 Peruvians will stand much closer than you will probably like when in conversation. But it will be considered rude if you start backing away.

And there is a fair amount of touching between men and men, men and women, and women and women while conversing. This includes hand on shoulders, hand on arms, and hand on hands. It is also common for men to walk arm in arm with other men and the same goes for women with other women, but this is just a sign of friendship.

Peruvians learn to treat the elderly with respect at a young age. There are separate lines in the banks and supermarkets for the elderly, pregnant women, and the disabled. When riding in full buses, young people will almost always jump to their feet and offer their seats to older passengers.

Peruvians don’t like to “lose face” or make others feel uncomfortable. Avoiding confrontations and maintaining composure at all times are common traits. Most people are very concerned with appearances and do not want to say anything that might reflect badly on them. People may err on the side of diplomacy and say what they think you want to hear, not what they are really thinking.

Trying to get the attention of a friend, a taxi or a waiter? People beckon one another by extending an arm (palm down) and making a scratching motion with their fingers. And, as in the U.S., the thumbs up sign is used to show approval or congratulations.

In Peru, people tend to dress a bit more formally than you might be accustomed to. Other than on the beach, you rarely see t-shirts, shorts, and flip-flops or sandals. And even there it is not unusual to see a few people dressed in their “Sunday best”. If you are invited to a party and unsure about the dress code, it’s always safer to err on the side of being over-dressed. 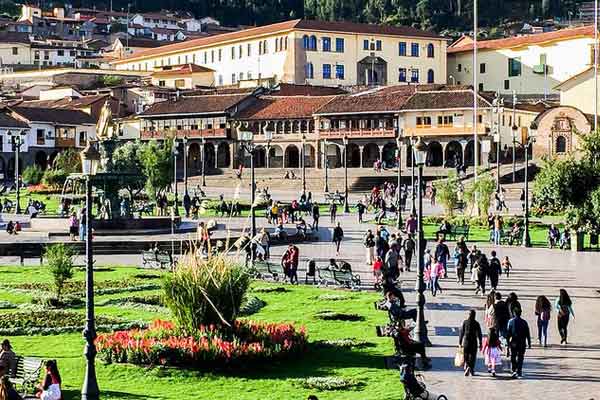 One of the first things I noticed when I moved to Peru was the importance attached to greeting people properly. It doesn’t matter who it is or how long you have been acquainted. Shopkeepers, taxi drivers, or carpenters are all fair game for a firm handshake, direct eye contact, name exchange, and a polite greeting.

When women greet other women for the first time, a light handshake will suffice. Friends will usually kiss each other once on the cheek. This same greeting occurs when men greet women who are friends or long-time acquaintances.

What do you say?

It takes a while to understand what time of day to use the following three main formal greetings:

But you soon find that you can also say “buenas” by itself at any time. This solves a lot of uncertainties. There are several popular informal greetings, the most popular being “Hola”. Follow it with one of the following questions and people might start thinking you have lived in Peru forever.

You would think that “Adios” would be the way to go but “Chau” is much more widely used. Even in more formal situations you will get away with chau. At night you can say “Buenos noches” as goodbye.

It’s not incorrect to use adios to say goodbye in Peru, but it is usually used for the “big goodbyes”.

Hasta means “until” and some expression using this word often accompanies any goodbye.
• Hasta luego — see you later
• Hasta mañana — see you tomorrow
• Hasta pronto — see you soon
• Hasta entonces — see you then 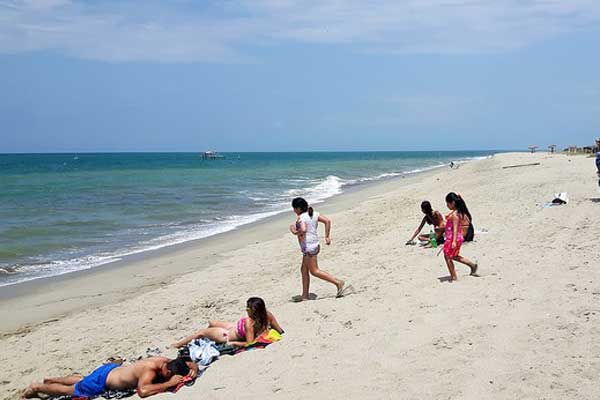 Peruvian families are generally close-knit and Peruvian culture is still known as being rather macho, with the men generally being the major income earners. However, it is becoming more and more acceptable for women to work outside the home and women can now be found in any professional field. But women are still expected to do most, if not all, of the cooking, cleaning, and child rearing.

Most Peruvians have both a church wedding as well as a civil ceremony, because the government only recognizes the civil marriage, but culturally only the religious ceremony truly matters (but to have a church wedding you must be legally married first). Most young people live with their parents until they get married, usually by their early- to mid-20s 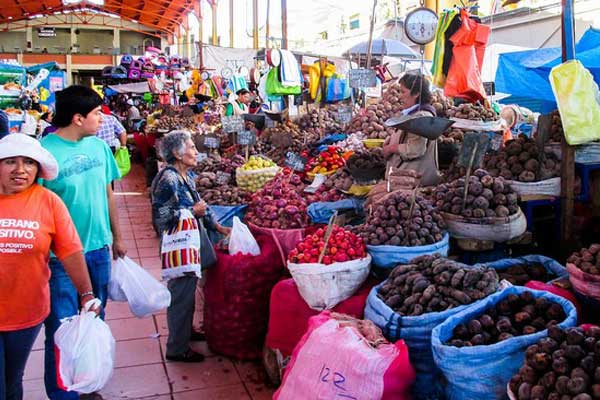 I’ve said it before and I will say it again…it’s worth moving to Peru for the food alone. From the lip-numbing rocoto relleno of Arequipa to the piping hot grilled anticuchos sold by Lima’s street vendors to the fresh fish ceviche on Huanchaco’s beachfront road, Peru will tickle all your culinary senses.

In addition, you have bakeries on every city block producing a daily output of traditional cakes and other sweets along with breads of every size and shape. The fact that dinner for many people is a large piece of cake and a cup of fresh coffee says it all. The big meal of the day usually begins around one in the afternoon and can last for a couple of hours.

When it comes to its popular dishes, Peru has been called the “Hope Diamond of Latin America”. The jungles, sea, and mountains provide a large variety of indigenous ingredients. Ancient Peruvian cuisine has been blended with techniques from Europe, Africa, and East Asia to create a unique culinary experience.

Although Peru’s national drink and claim to fame is Pisco, beer is by far the cheapest and most popular alcoholic drink. Most Peruvians enjoy partying, socializing, and having fun and alcohol is an accepted part of life, even with parents drinking with kids etc.

The traditional Peruvian way of drinking beer is a cultural oddity. Friends gather in a rough circle with a bottle of beer, usually 720ml, accompanied by a single small glass. Here’s the system:

Of course, it is only polite for each person to buy at least one bottle for the group. I have only met one Peruvian so far that will not drink this way and insists on his own glass every time for sanitary reasons. 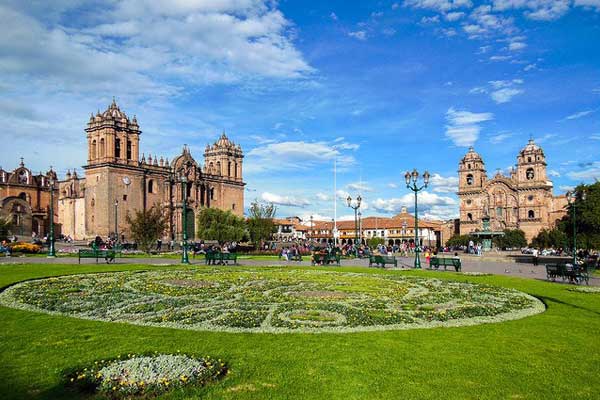 There is “Peruvian time” and “Hora inglesa” (English time). If you’re invited to a party or out for dinner, being 30 minutes late is the norm. But if somebody says “hora inglesa” it means that they want you there on time. Be happy that the bus, train, and plane schedules follow the latter.

As in many other countries, it’s nice to bring a small gift if you are invited out to dinner. A small box of chocolates or sweets, flowers or a bottle of wine are all appropriate gifts.

Peruvians do not switch knives and forks while eating; the knife remains in the right hand, and the fork remains in the left. When you are finished, place them diagonally across the plate. When not holding utensils, your hands are expected to be visible above the table and not kept in your lap. And no elbows on the table.

It is considered bad form to leave the dinner party, or the table, at any time. Allow more senior members of your party to enter rooms ahead of you: men should move aside to allow women to enter the room ahead of them. 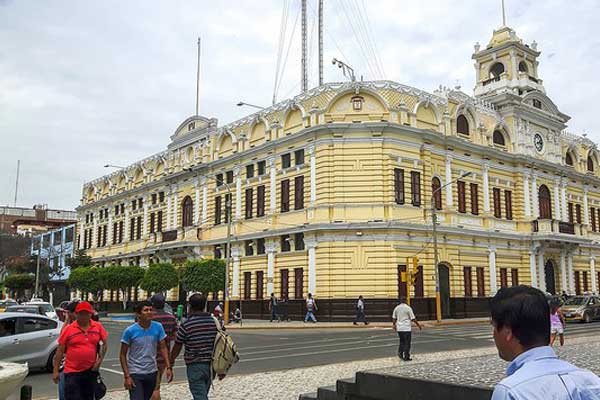 For business meetings, it is best to arrive on time but don’t be surprised if the rest show up later. You should avoid talking about politics, religion, terrorists, and a person’s ancestry. Good topics include soccer, family, places to visit in Peru, and local food.

It is best to address people directly by using their professional title only. If they do not have professional titles like, Doctor, Lawyer, etc., they should be addressed as Señor, Señora, Señorita, plus their surnames.