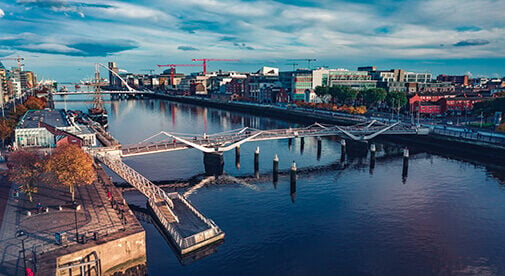 The real estate market tears forward, with no sign of a pull back. @Pexels/Luciann

The manicured Georgian squares are lush with blooming flowers. The wide and leafy streets are empty, save for a few idle students and moms hurrying to brunch. It’s an ideal time to take in the period architecture and enjoy a coffee on one of the city’s newly pedestrianized streets.

Earlier this week, I was staying in my new favorite hotel in the city, the Dylan. Back in 2000, when I first lived in Dublin, the Victorian building the hotel is housed in was a nurses’ boarding house. I’m told it was damp, cold, and drafty. Today, it’s been transformed into a five-star boutique hotel.

The wellspring of Dublin’s prosperity hankers back to Ireland’s “Celtic Tiger” era—a period of rapid economic growth, between 1995 and 2007, that saw Ireland transform from one of the poorest to one of the richest countries in Western Europe.

At the root of it was an economic policy of low corporate tax that attracted huge foreign investment.

Money rushed in from the U.S. The tech and pharmaceutical sectors boomed. And to this day, Dublin remains a major hub for multinational giants—hosting Google, Facebook, Airbnb, TripAdvisor, Indeed, and more.

Now, that could all change…

According to media experts, this will be a disaster for Ireland, sparking capital flight. But here on the leafy streets of Dublin it’s business as usual. The supposed end of decades-long growth is barely being discussed.

You could call it hubris. But the locals might know something the mainstream media does not. No one here is expecting fast and radical change to the tax environment for multinationals. And if it does come about, Dublin could well ride out the storm—it has a lot to offer beyond low tax.

Meanwhile, the real estate market tears forward, with no sign of a pull back.

When I made my first buy recommendations in Ireland, it was in the years following the financial crisis of 2008. A confluence of factors meant that there was always going to be a strong recovery. I was looking at highly desirable properties in one of the world’s fastest growing, richest, and most internationalised little countries. But we could buy super cheap thanks to the crushing financial crisis and Ireland’s real estate crash.

For instance, in 2013 I recommended condos close to the city’s International Financial Services Centre (IFSC), and close to where you’ll now find tech companies including Twitter, Facebook, Google, and LinkedIn. They listed far below true value at €140,000.

And these gains despite many people moving to the commuter belt outside Dublin and beyond.

Good news for real estate investors, but it’s not all fairy tales and prosperity. Addiction, homelessness, and begging are prominent and visible throughout the city. Tents along the Grand Canal are reminiscent of what’s happening in San Francisco and Los Angeles. It reflects a shocking failure of housing policy and mental health services.

It makes my blood boil because this was always going to be the outcome of really dumb policies instituted by Ireland’s political class (across the ideological spectrum).

Policies like the ban of “bedsits” in 2013. Bedsits were typically old homes divided into rooms and rented to people on the margins. Many of them were indeed substandard, but they provided much needed housing for people with nowhere else to go. After the ban, these homes were sold and converted to multi-million-euro luxury homes. The former tenants wound up on the streets.

It was one in a litany of bad ideas that has made Dublin one of the most expensive real estate markets in Europe. Permits (called planning permission here) make it near impossible to do almost anything. Planning rulings can take years and can be inconsistent, making any type of project risky.

These days I’m only in Ireland as a visitor—and to occasionally conduct business. The great thing about living the international life is that I can distance myself from political failures. I can pick and choose where I live. I’m not constrained by any market or at the behest of any housing policy or tax system. I’m more self-reliant.

Almost like my own sovereign nation, I choose the rules that benefit me best. And it means I can enjoy a city like Dublin when I want, without being forced to participate in an inflated real estate market.
This week, I took meetings with members of my team at the Dylan; we had walking meetings in Merrion Square, the heart of Georgina Dublin; and we hashed out travel plans for the coming weeks and months ahead.

In fact, one of my researchers has just landed in Portugal. He’ll be working his way from Lisbon to the hilltowns in the east, and all the way down to the Algarve in search of bargain real estate.

In Mexico, I’ve a guy putting boots on the ground in the Bay of Banderas region. He’ll be scouting Puerto Vallarta and some of the surrounding towns along the Pacific coast.

While another researcher is prepping for an extensive scouting trip through Italy, taking in Rome, Venice, and as many medieval towns and overlooked villages as he can fit in along the way.

I’ll be getting some of their first notes from the road next week, so stay tuned…

Audrey says: Will you have a RETA deal anytime soon in Tulum?

Ronan says: Hi Audrey. Yes, I expect to launch a brand new Tulum deal within the next six weeks. We are working on the last due diligence items needed before launch.

The new opportunity is near the ancient Mayan ruins and will be some of the closest condos to Tulum’s prized white sands…in a previously untouched verdant area.

Stay tuned for more details in the weeks ahead.

The Other Real Estate Boom