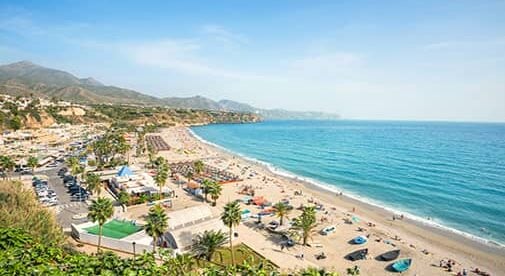 When my wife Alynne and I retired three years ago, like many, we thought it would be a truly fantastic adventure to move to someplace outside the U.S. where we could experience a totally different culture, and travel to all the places we had always wanted to see.

We subscribed to International Living and Real Estate Trend Alert, and began devouring articles about others who had already blazed the trail overseas.

With our list of criteria, we first attended an IL conference in Quito, Ecuador, and made our way through the Andes to visit Cuenca. Very nice… but we couldn’t picture ourselves living there.

The next year we took a tour around Portugal to explore another of IL‘s favorite destinations. Better, but still not quite right for us.

On the last night of that trip we received an email from RETA about a small group of homes on the Costa del Sol in Southern Spain that had been built a decade before but remained unfinished and unoccupied since the developer went under in 2010.

The photos showed beautiful four-story white villas with a 180-degree blue water vista of the Mediterranean and the northern coast of Africa around Tangier. But what really captured us was the jaw-dropping view of the Rock of Gibraltar.

After long and careful analysis of the pros and cons (actually all of about five minutes) we bought it remotely, sight unseen (!), sold our home in California, got our visas, put all our furnishings in a large shipping container, crated our dog… and left for Spain!

I must admit to you that it was not until we were driving up the hill to our property on that first moonlit night, that it occurred to me that we might find an open field with a sign that said: “BE THE FIRST TO BUILD YOUR DREAM HOME HERE.”

But there the houses were. In need of completion, as they told us, but exactly as pictured. We relied totally on the good name and reputation of International Living and they came through for us. We knew we had made a great decision.

The Costa del Sol is like Southern California must have been 50 years ago. Sunny, warm, breezy, and awash in clear light.

But there was much work to be done.

Our home had no completed bathrooms, no kitchen, and no power or water at first. The arrival of the container with our furniture was delayed for weeks.

We slept on a blow-up mattress that we brought in our suitcase. Our first showers were with one of us holding up a shower curtain to contain the water for the other.

Our first dinner was a loaf of great Spanish bread, salami, cheese, and a bottle of red wine. Our first candlelit dinner table was an overturned plastic pail with an unused toilet seat cover we found, along with two abandoned folding chairs. Very romantic.

That was our beginning.

Now, three years later, we have finished our renovation and are thrilled with how everything turned out.

We knocked out walls, put in floor-to-ceiling glass, and installed two fireplaces. We even commissioned a local sculptor to design a water fountain for the rooftop terrace. It is beautiful.

We had just begun hammering away at our travel list: Egypt, Greece, Morocco… We were knocking them off one by one, then Covid hit and everything changed.

Locked down, we looked at each other and said, “What should we do now?”

By chance, we found a way to embark on a wonderful journey unlike anything we could have imagined.

About 15 years ago, when I was living in Southern California, I bought a cookbook: The Barbecue! Bible with over 500 recipes, by Steven Raichlen.

What grabbed my attention was that it was no ordinary cookbook, but one filled with exotic recipes from all over the world. I just had to have it. But for some reason it remained on the shelf, and I never cooked a single recipe.

When we packed up and moved to Spain, we brought the cookbook with us.

With no kitchen at first, we ate simply and relied on carryout for months. Once our kitchen was in place, we bought a barbecue and started cooking at home. When Covid hit, out came The Barbecue! Bible and we did our first recipe.

We made another. That was great, too. Then another and another. They were all great. We were hooked. When we had done somewhere around 100 recipes, I had a crazy idea. “Why not do all 500?”

The look Alynne gave me was, shall we say, skeptical, but she soon signed on with great enthusiasm.

As well as being packed with fantastic recipes, the book is filled with quirky stories from the global barbecue trail, like the recipe for chicken tikka, which came from a Pakistani sea captain the author met on a flight from Singapore to Bangkok. Or the woman from Burkina Faso who drove a cab in Paris, and gave the author an incredible lamb recipe from that remote spot.

We enjoyed every story almost as much as the food itself. They were like a travel blog. We thought, “Well, if we can’t go there now, we can at least sample their cuisine.”

And so, it turned into a really fun and rewarding new passion for us during lockdown. After two years, we hit 500 and our Barbecue Bible is now totally worn out, glued, taped, tattered, and stained. The unexpected bonus along the way was that we became pretty fair chefs.

During this difficult time, we opened up a very special book and it added a whole new dimension of
international cooking to our international living. We have enjoyed the best food of our lives, in a home that we love, in one of the most beautiful locations we can imagine. It has been a fantastic journey.

On a trip to Egypt, we hired a seasoned guide, and it was one of the most exciting adventures we have ever had.

When we got locked down, we found a guide in Steven Raichlen to show us the cuisines of faraway places.

When we decided to retire overseas, we leaned on the knowledge and experience of International Living, and it turned out better than we had ever hoped.

We want to pass along our story to all those who are dreaming of taking the plunge to retire overseas. It is not without risks (like a global pandemic), but if you hit it right, it will simply be the best thing you have ever done. It worked for us and we could never have done it without the roadmap provided by International Living and RETA.

And when the unexpected happens, you never know what beautiful thing may be just around the bend that can add a whole new feature to the landscape of your experience.