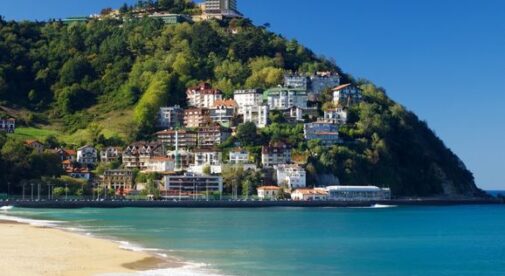 With thousands of miles of beaches, it is impossible to pick my absolute favorite seaside towns in Spain. All of the cities, towns, and villages I have visited have something unique and special about them. Additionally, some beaches are similar while others are dramatically different. I have found numerous places that I like and I’m still discovering more. However, here are five of my favorite seaside towns on mainland Spain for different reasons.

Cadaques: Secluded Luxury by the Hills and Sea

Located on the far easternmost point of Spain, roughly one hour’s drive away from Girona is a remote and picturesque Mediterranean village. The tiny town of Cadaques is the sparkling jewel of the Costa Brava. It looks nothing like beach destinations elsewhere in Spain, but far closer to the blue-and-white beauty of a Greek island. The striking contrast of white and different shades of blue is everywhere in Cadaques. In the deep blue and emerald sea, in the bright cloudless sky, and the charming, whitewashed houses. Within the village itself, the main star of the seafront road is Casa Salvador Dali, where the famous surrealist painter lived for more than half a century. A large house with huge white statues of eggs on its roof, it’s one of the few tourist draws in town.

Its close location to France and vivid blue sea also inspired several French painters, including Matisse. While not as glamorous and overpriced as expected, Cadaques is a beautiful luxury destination focused on relaxation—an ideal getaway after a visit to the hectic Barcelona. Its main beach, aptly named Playa Grande, is accessible by walking from any point in the village. Further south, the coast is lined with small beaches, sun-bleached cliffs, and rocky coves with crystal-clear water.

San Sebastian: A Rugged Beauty That Has a Bit of Everything Located on the northern coast of Spain, deep inside Basque country, San Sebastian is a unique destination unlike what most visitors associate with the country. It’s hard not to fall for the Basque charm of the northern seaside capital San Sebastian, also known in the local language as Donostia. The city has a bit of everything—charming windswept beaches, a unique Basque culture, incredible treks in mountainous landscapes, and an excellent food scene. The pintxo, the local version of tapas, is especially famous and served in countless pintxo bars around town.

It also hosts a film festival, second only to Cannes in size and fame. In addition to its well-deserved reputation for cultural sites and world-class restaurants, San Sebastian has a unique landscape thanks to its stunning coastal scenery, windswept Atlantic climate, and mountains. Towering high over the western side of the city is Monte Igueldo. A trip to the top can be done on a cable railway revealing a magnificent panoramic view over La Concha and its crescent-shaped bay. In contrast to the pleasant scenery of the southern coasts, San Sebastian has a much wilder and more dramatic beauty. Its beaches are considered some of the best in Europe, and each is worth a visit. The biggest and most famous, La Concha, might be a rude word in other Spanish-language areas, but here means literally “the Shell.” A massive popular beach where tides sweep over the sand and cover the boardwalks every afternoon. Santa Clara is a more secluded beach, only open to visitors in the summer months, and accessible by boat from the city proper. Zarautz beach, located 30 minutes away, is several miles long and one of the world’s best locations for surfing. The town’s surroundings are scenic, filled with coastal rock formations, green hills, and an endless glittering ocean.

Sitges: The Timeless Town With a Thriving LGBTQIA2S+ Scene Sitges, just one hour south of Barcelona, boasts 17 beaches and a quiet atmosphere of timelessness despite its close proximity to the Catalan capital. Unlike other seaside towns such as Cannes and St. Tropez in France, the sleepy Sitges never became a summer playground for millionaires and remains very affordable today. The most striking thing about Sitges is its uniquely Catalan attitude of colorful, creative anarchy. It can be seen in the whimsical architecture of Antoni Gaudi, the nightmarish surrealism of Salvador Dali, and in public attitudes all around Sitges. The beach town has long been famous as the gay capital of the Spanish coast, and local attitudes have always been very tolerant towards LGBTQIA2S+ travelers. Differences are appreciated and celebrated here, not viewed with suspicion, and the coastal road of Sitges has a vibrant nightlife in the summer months.

Not surprisingly, the town has one of Catalonia’s best food and wine scenes. The two highlights of the year are, for obvious reasons, the Carnival in February and the Sitges Pride festival in June. Sitges has swimmable beaches of every shape and kind, but every beach in the area is fairly small and sheltered by cliffs against the wind. For a quieter and more remote beach experience, swing by the secluded sandy cove at Platja de les Anquines at the far western end. Interested in a nudist swim behind rocks with a dramatic mountainous backdrop? Go to Platja des Balmins in the east. For the biggest LGBTQIA2S+ beach in town, visit the crowded Platja de la Bassa Rodona near the center of town.

Cadiz: A Coast of History and Light 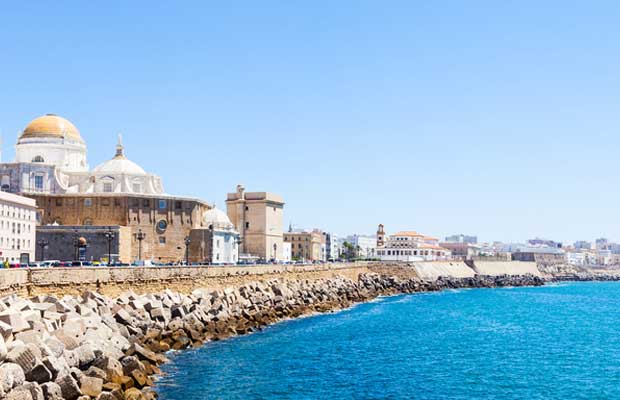 An ancient port city in Spain’s sun-baked southern region of Andalucia, few cities have a history as long as Cadiz. Originally founded by Carthage and re-founded in Roman times, Cadiz is located in one of the most stunningly beautiful spots in the country. A sunny region of long sandy beaches and classical architecture bleached under the sun, Cadiz is a part of the gorgeous Costa de la Luz. Most of the Bay of Cadiz is lined with pristine beaches of powdery sand, coastal hills, and charming small towns with whitewashed houses dating from ancient times. One of the best destinations in the area is Puerto de Santa Maria, a picturesque small town that combines sun, sea, and history. It also borders a national park of forests and wetlands by the sea. For a more bohemian experience, swing by Los Canos de Meca, a small community on the coastal hills popular with hippie travelers and surfers during the summers.

For those who get tired of the endless beach life and seeking more historical and cultural destinations, Tarifa is located at the dramatic point where the Atlantic and Mediterranean meet. An ancient town completely different from anything else in the Andalucia area, Tarifa has a unique character of its own. Part windsurfing and kitesurfing hotspot, part Moorish medieval town with walled medinas and narrow winding streets. Tarifa’s best beaches include Valdevaqueros and Los Lances. Both are long-time favorites with surfers and swimmers alike due to being uniquely positioned between two bodies of water. Tarifa often gets the best of both worlds.

Almeria: The Home of Unspoiled Sand and Europe’s Only Desert

Sometimes wrongly called a “hidden gem” of the southeastern Andalucia region, the medieval city of Almeria is well-known among beachgoers and hikers around the country. Its beaches are famously pristine, despite the tourism, simply because there are so many of them. Almeria has a long sandy coastline with beaches of every shape, size, and character. The best beaches are in Cabo de Gata National Park, in which empty coves of powdery-white sand are surrounded by mountains and cactus-covered hills. In the center of the national park, with its huge stretch of unspoiled sand, Playa de los Muertos is one of the area’s best beaches for swimming and a must-see for those who visit Almeria.

The town itself has a fascinating history and plenty of Moorish Islamic architecture—most famously the Alcazaba, the medieval Moorish fortress looming over Almeria from its hill. Although less famous than the nearby fortresses in Granada, the massive granite Alcazaba has a far older history. According to a local saying, “when Almeria was Almeria, Granada was its farm.” Last but not least, Almeria is by far the driest place in Europe and the home of Europe’s only desert, a place of sand dunes and salt flats. An old tradition not lost here is a free lunch. Since serving a plate of tapas together with wine (or beer, or soft drink) is the norm in Almeria, it is equivalent to having a free lunch. A beach trip to southern Spain without stopping by Almeria would be a wasted trip.

As I still have many seaside towns and villages to discover throughout mainland Spain, the Canary Islands, and the Balearic Islands, my favorites may change. However, for now, you won’t be disappointed visiting any of these fascinating towns.