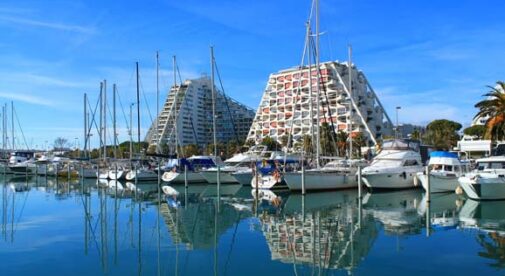 La Grande Motte, the Camargue region’s most popular resort, is French, but with a southern twist. ©Picturereflex/iStock

“Some months, the mussels are as fat as steaks,” chuckled Willy, my gracious waiter in Saintes-Maries-de-la-Mer, southern France. With a wiry crop of salt-and-pepper hair and jaunty set of wire-rimmed glasses, he had the energy of someone half his age… and a passion for French cuisine that was infectious.

“Other months, like June,” he continued, balancing my tiny, goblet-shaped glass of rosé wine on his tray, “they’re very small, and we stop serving them. We only want to serve a quality product. Like the meat, it comes from Nimes and Spain. The chef has a high-end supplier who delivers at 7 a.m. every day. If it’s not the top standard, it’s sent back.”

I sat in the colorful, and thoroughly welcoming, restaurant El Campo on day seven of a week-long vacation in the Camargue region of southeastern France. Filled to the rafters with a mishmash of wooden guitars, bolero hats, and iron-worked bullfighter etching, it was hard to mistake El Campo’s vibe.

Although the cuisine might have been fit for the finest of Parisian bistros, I was in the heart of France’s cowboy country—where Spanish traditions mix with Provençal flair, and where the way you tend to your livestock is as sacred as the meat you serve at your table.

“If you come back for Flamenco nights, make sure to reserve a few days in advance,” continued Willy, taking an order of moules-frites (mussels and fries) and the house specialty of gardiane de taureau—southern France’s olive-laced answer to Burgundy beef (boeuf bourguignon) made with meat from the bulls of the Camargue.

The house rosé had a disappointing sting, but the meat was melt-in-your-mouth delicious, with a sublime red-wine reduction sauce. The mussels, while not quite the size of a rib-eye, came in a serving dish shaped like a mussel—its black curvature upping El Campo’s kitsch factor to utterly delightful.

Swirling the last of the fries in the creamy garlic sauce that had accompanied the mussels, I watched tourists take photos in front of the restaurant’s blue-and-white tiled fountain—the soft splash of water mixing with the airy sound of Spanish conversation at the tables nearby.

Much like the Camargue itself, El Campo was both rustic and thoroughly refined. This region of southeast France is a place where cowboys (gardians) roam freely through the grasslands, and where destination restaurants like La Chassagnette offer €100+ gastronomic meals inspired by the literary works of Alexandre Dumas.

Encompassing a huge swatch of protected parkland, some 247,000 acres in total, the Camargue is bordered by the Mediterranean Sea to the south and the sun-washed cities of Arles and Montpellier to the north and west.

A paradise for nature-lovers, particularly birders, the region attracts travelers keen on experiencing the diversity of its marshland close-up. Numerous species of birds make this area of the Rhone River delta their home. Along with the taureau de camargue (bull), the pink flamingo is the undisputed symbol of the region.

Flocks can be seen flying overhead at sunset, much to the delight of visiting tourists.

Other seaside cities cater to French beach-going at its very best. La Grande Motte, with its wide, sandy beaches and ample marina, is the Camargue’s largest vacation resort and receives around 2 million tourists per year. Known for its quirky architecture, characterized by a striking set of pyramid-like buildings visible for miles along the coastline, avant-garde architect Jean Balladur designed the city from the ground-up in the 1960s and 1970s.

Dubbed “La Floride de demain” (the Florida of tomorrow) at the time, 70% of La Grande Motte is dedicated to pedestrian-only parks and green spaces, with an impressive range of sports facilities and an international, 18-hole golf course making their home in the seaside city.

For my visit, I’d posted-up camp in an actual French campsite at Le Grau du Roi—the working-class answer to La Grande Motte. Given that working class in France ensured a wooden cabana on the beach, and sunset views of the Mediterranean Sea, I considered myself to be in pretty good company. I ate seared tuna along the quay at Oh Frere de la Cote! restaurant, watched the flamingos take flight from my lounge chair at the pool, and sipped fruits rouges (mixed berry) mojitos at Le Georges cocktail bar at Port Camargue.

Packing up on my last day in town, I left in search of the cherry on the cake (cerise sur le gateau) of the week-long adventure: Saintes-Maries-de-la-Mer, the capital of the Camargue.

I caught glimpses of white horses, an ancestral breed endemic to the region, standing solemnly behind fences or ambling slowly along the motorway—and local guides taking visitors on tours along the Petit Rhone distributary.

It seemed like the road would go on forever. Flat, wild, and at times, unforgiving. 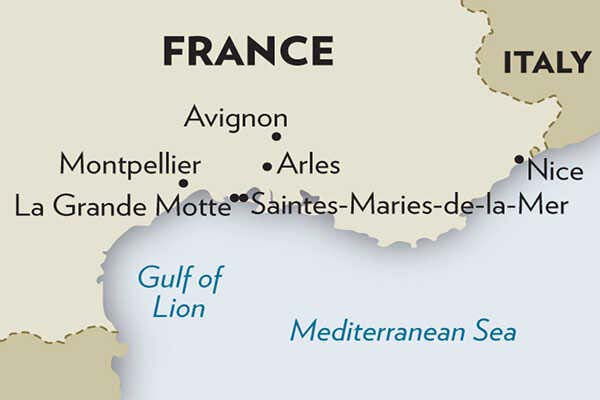 A fork in the road led to an opportunity to cross the Petit Rhone River by barge. Looking at the cars parked sideways in the dirt, I decided to give it a pass. Under a thatched-roof, open-air café just off the road, their owners sat drinking cold beverages and waiting for the next barge-driver to show up. Departure time, undetermined.

The actual bank-to-bank touchdown time looked to be not much more than five minutes, but it’s not as simple as that. This is still the south of France after all. It’s never about time.

The first signs of Saintes-Maries-de-la-Mer came into view as I passed a quarter-mile long strip of camping cars and vans parked along the highway. Piled up on the dirt roads and parking lots leading into town, it was a curious sight. A whole community of nomads had sprung up out of nowhere.

It wasn’t until I got closer to the center that things started to make sense.

Looking a lot like France’s answer to Andalusia, a tightly knit collection of chalk-colored buildings topped with terracotta roofs came into view. The one-note color scheme set up a striking contrast to the turquoise waters of the Mediterranean. The effect was captivating.

Perhaps Vincent Van Gogh had had a similar reaction upon discovering Saintes-Maries’ breathtaking seascape. The painter visited the town during his artistic sojourn in Arles, creating several canvases and sketches of the then fisherman’s village.

Sunset views of the Mediterranean Sea.

From my viewpoint, it was impossible to miss the single, stark bell tower which rose high above the town center, dominating the landscape. Built in the 9th century, the Romanesque Saintes-Maries-de-la-Mer church was unquestionably the focal-point of daily life and, as it turned out, the reason for all the camping cars and trailers.

A Roma (or gitan in French) holy site, Saintes-Maries-de-la-Mer is a sacred pilgrimage destination. The imposing church of the same name, dedicated to the Three Marys, houses the Roma patron saint Sara la Noire. Several times a year, the town is taken over by traveling Roma who make the journey from all corners of Europe.

After lunch, I paid the €2 ($2.25) to climb to the roof of Saintes-Maries-de-la-Mer church. Below, I saw the same mix of the everyday and the elegant. Pilgrims mingled with vacationers—the church a calm, centuries-old oasis, the boutiques abuzz with the latest fashions and chic, French décor.

In the distance, the landscape of the Camargue stretched endlessly before me. Earthly, vibrant, and dancing to a beat all its own, the magic of France’s cowboy country would long follow me home.

HOW MUCH FOR A HOME?

If you’re interested in tapping in to the fine-living lifestyle of the Camargue, housing options are diverse and plentiful.For the budget-conscious, Le Grau du Roi offers the best bang for your buck. A two-bedroom, one-bathroom, 860-square-foot apartment near the sea comes in at €265,000 ($296,700). A centrally-located three-bedroom home—600 feet from the nearest beach—goes for €374,000 ($418,740).

The downtown area is very walkable, with a lively marina full of cafés, restaurants, and boutiques. Summer dinner cruises depart nightly from the docks facing the town’s striking lighthouse.

A mere 10 minutes away, Aigues-Mortes is Le Grau du Roi’s upscale cousin—where restaurants pull out the white tablecloths and dress shops feature the latest Parisian fashions. Housing prices follow this high-end pattern, and a two-bedroom apartment will run you around €400,000 ($447,850).

Some astute folks may prefer to head to Montpellier—France’s fastest-growing metropolitan area. With apartments starting at $200,000, and a non-stop summer shuttle service that gets you from city to beach in around 30 minutes, residents are just a bus ride away from the wild heart of the Camargue.