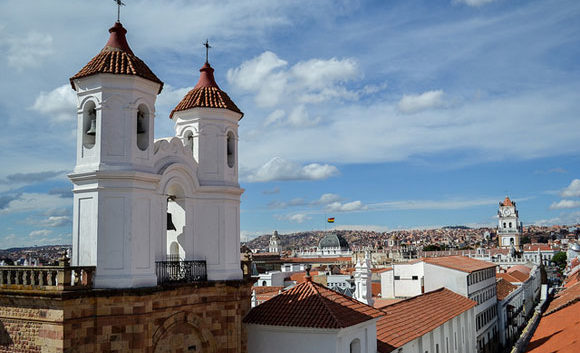 Learn more about Bolivia and other countries in our daily postcard e-letter. Simply enter your email address below and we'll send you a FREE report: Adventure Calls in Bolivia: A Taste of Adventurous Bolivia.

Climate: Varies with altitude, humid and tropical to cold and semi-arid. 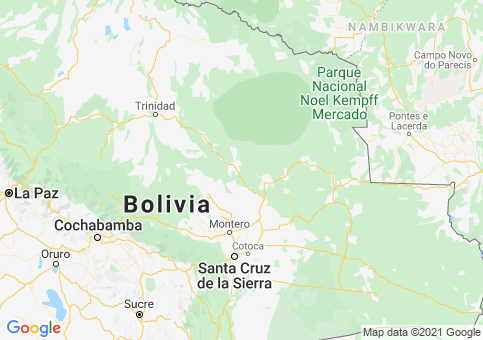 Bolivia is one of only two land-locked nations in South America. But despite its lack of coast, the country has a wealth of riches in terms of geography, history, culture, and natural resources.

With an area of just over 424,000 square miles, Bolivia is roughly the same size as the states of Colorado, Utah, Arizona, and New Mexico combined. Its share of the Amazon rainforest covers 66% of the country, though this is the least populated area. Most residents live at higher altitude thanks to the majestic Andes Mountains that run through Bolivia’s western side.

What’s so appealing about Bolivia’s highlands? To start, there’s the weather. Bolivia lies well below the equator in the southern hemisphere where it’s often hot. But the higher you climb in altitude, the more of a cooling effect you’ll receive, which is exactly what happens in Bolivia.

In the popular mountain city of Cochabamba you’ll find average highs range from 75 F to 82 F throughout the year. Sucre is a little cooler with average highs between 58 F and 72 F. And Tarija sits right in the middle with average temperatures fluctuating between 60 F and 73 F.

Don’t forget that with its location south of the equator, Bolivia’s winter starts in June and runs into September, while the summer months cover late December through March. And the higher you go in elevation, the cooler the climate becomes.

Bolivian culture is also a strong draw for many expats. There are 36 different ethnic indigenous groups within the country and they account for 62% of the population. Their culture runs strong and deep, and pre-dates even the Incas. Each group is recognized by their unique clothing styles, the patterns woven into their textiles, and their language. You’ll be sure to encounter many of them during your time in the country and most are happy to share their traditions, food, and lifestyle with newcomers.

Bolivia’s recent history begins with the arrival of the Spanish in the 16th century. They were enamored with the region’s lush forests, mountain streams, and of course the silver found in the mountains of Potosí. They quickly built cities and towns and set about bringing their own architecture, cuisine, and religion to what is now Bolivia.

Today most cities still have a colonial section where you can visit centuries-old cathedrals and houses. Cobbled roads and central plazas are all throwbacks to the era of Spanish rule, and they provide a constant reminder of just how much transition the country has seen in the past 500 years.

Visiting the sites is easy in this country as public transportation is inexpensive. A five-minute taxi-ride often costs just a dollar and goes up in small increments from there. Fare on public buses is even more affordable.

And while there are roads connecting all areas of Bolivia, it is a large country with mountainous terrain. The quickest way to visit other areas is by plane which is also low-cost. Boliviana de Aviación (BOA) is the local airline and they have routes between all of Bolivia’s major cities as well as a few international destinations. A one-way flight between the cities of Cochabamba and Sucre for example, costs less than $30. You’ll pay more for longer distances, but not much, and you’ll benefit from a quick, comfortable journey.

You may wonder how you’ll keep occupied in Bolivia, but there’s no shortage of activities within the country. In the larger cities you’ll have your pick of traditional entertainment like nights out at the theater, visiting art galleries, heading to the movies, or enjoying fine dining.

Those who like the outdoors will find plenty of hiking opportunities, national parks to visit, and rivers, lakes, and waterfalls. Some of the world’s best Golden Dorado fishing can be found within the country and tourists come from around the world to visit Lake Titicaca, the Uyuni Salt Flats, and portions of the Inca Trail.

And then of course, there’s wine country. Many folks don’t realize that Bolivia has its own vineyards and produces a sizeable amount of wine. Most of it is sold locally, so you’re not likely to see it in a North American liquor store. Nonetheless, if you’re in the Tarija area, be sure to take a tour of wine country and attend a few tastings. And wherever you live in the country, you’ll benefit from the availability of delicious wines at low prices. You can spend as little as $3 on a bottle of decent table wine, but a nicely finished bottle of quality vino can still be had for under $10. 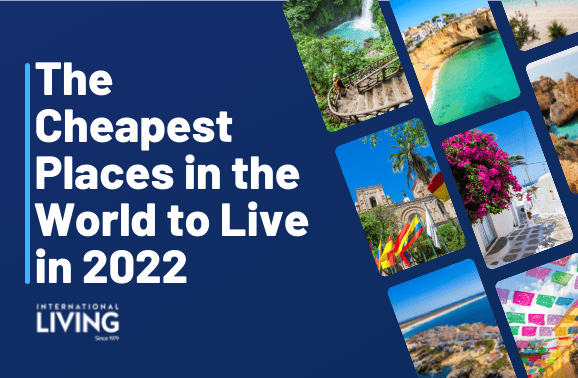 Affordability is often the single-most influential factor in choosing an overseas retirement destination. After all, who wants to spend their golden years counting pennies and wondering how far the next Social Security check will stretch? That’s the beauty of travel, and International Living’s Annual Global Retirement Index—you have the power to choose a country with a cost of living that suits your budget. 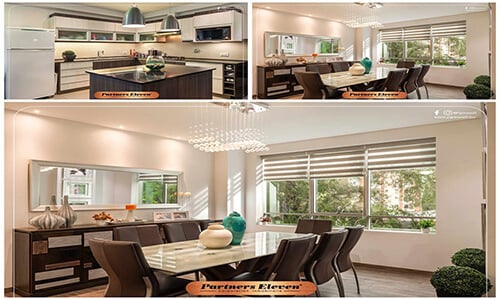 When I leave my luxury beach condo in Cabo each spring, after having spent another glorious winter in the warm Baja California sun, I hand my keys to my rental manager. Likewise, when I leave my other base on Portugal’s Silver Coast to spend time with family and friends in Ireland during the summer. What END_OF_DOCUMENT_TOKEN_TO_BE_REPLACED 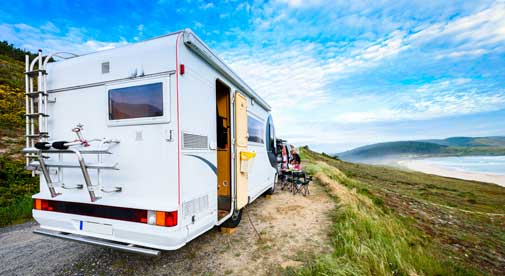 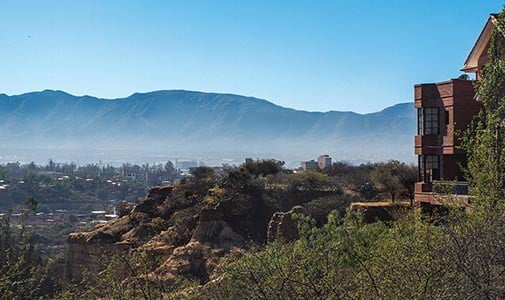 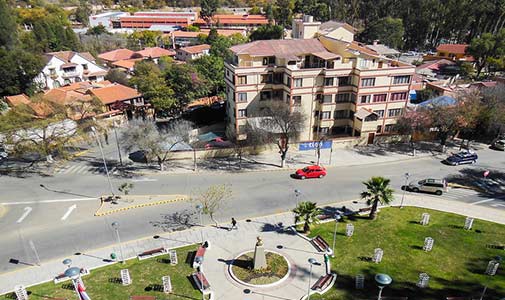 Wine grapes need a certain type of climate to thrive. Luckily, this type of temperate weather, rarely very cold or very hot, makes for very comfortable living for people too, in Bolivia’s wine country. It may not be as well-known as neighbors... 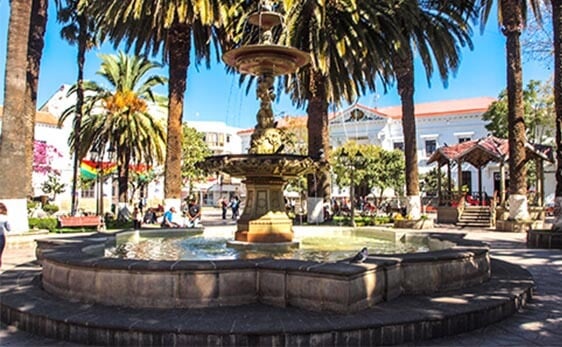 I watched from the second-floor balcony, sipping espresso, as the hustle and bustle of Sucre went on in the city’s main park below. Kids just out of class passed by in packs. Young couples sat close on wrought-iron park benches. Businessmen got their shoes shined. Vendors in indigenous garb sold cut up fruit, nuts, and other snacks. The weather was a crisp mid-60s F (it warmed up later into the 70s F and dipped into the 40s F at night, which is typical), but the sun was shining brightly... 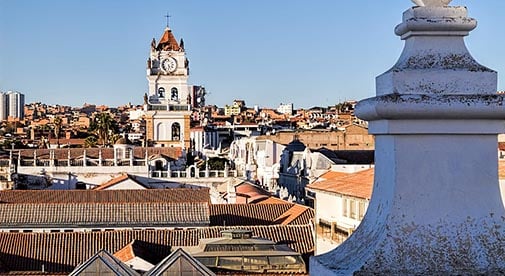 Sucre is a medium-sized city of 300,000 people founded in the 16th century that offers many reasons to visit or live here full-time. For one, the surroundings are beautiful. Its UNESCO World Heritage centro is full of centuries-old architecture... 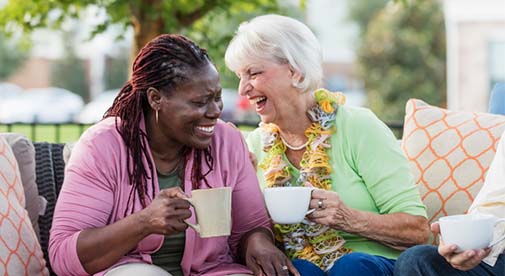 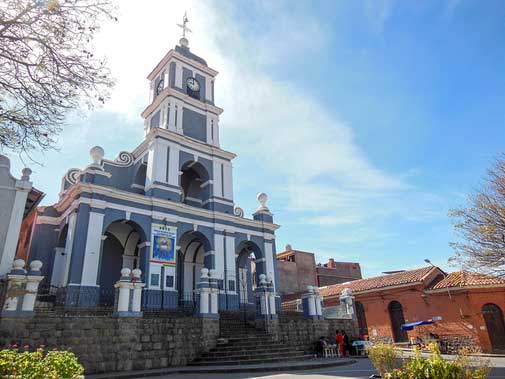 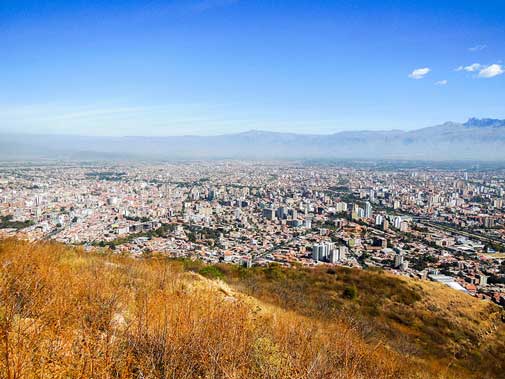 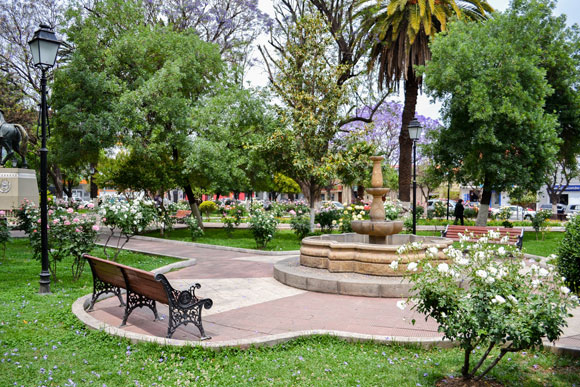 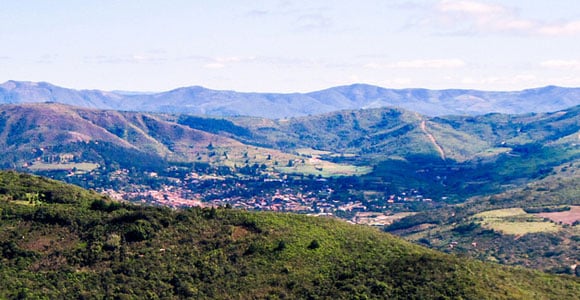 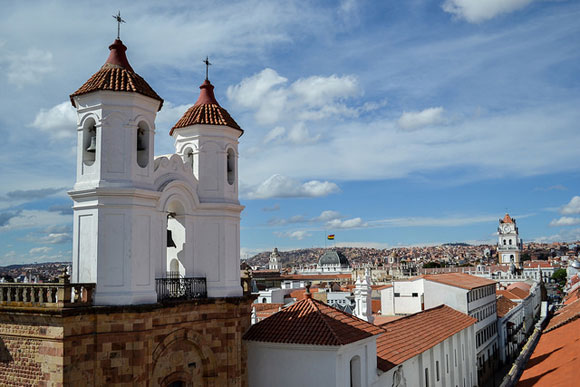 Bolivia is one of only two land-locked nations in South America. But despite its lack of coast, the country has a wealth of riches in terms of geography, history, culture, and natural resources. In the lowlands, lush rainforest canopies house energetic monkeys, camouflaged snakes, long-billed toucans, and lazy sloths.

Learn more about Bolivia and other countries in our daily postcard e-letter. Simply enter your email address below and we’ll send you a FREE report: Adventure Calls in Bolivia: A Taste of Adventurous Bolivia.