El Salvador: Not Just a Haven for Surfers

With 190 miles of coast, replete with warm, sandy beaches that are considered amongst the best in the world by surfers, San Salvador ought to be more renowned. Beachfront property here is inexpensive…you can buy villas just a few steps from the blue Pacific Ocean for less than $100,000.

But El Salvador has more to offer than just its stunning coast-line. With the cosmopolitan capital San Salvador, and an interior that includes volcanoes, hot springs, lakes and waterfalls—this little country has plenty to offer those in search of unspoiled natural beauty.

The Economy of El Salvador

The smallest country in Central America geographically, El Salvador has the third largest economy in the region. With the global recession in 2009, real GDP contracted by 3.1%. The economy slowed even further during 2010-12. Remittances accounted for 17% of GDP in 2011 and were received by about a third of all households.

In 2006, El Salvador was the first country to ratify the Dominican Republic-Central American Free Trade Agreement (CAFTA-DR), which has bolstered the export of processed foods, sugar, and ethanol, and supported investment in the apparel sector amid increased Asian competition. El Salvador has promoted an open trade and investment environment and has embarked on a wave of privatizations extending to telecom, electricity distribution, banking, and pension funds.

The Salvadoran Government maintained fiscal discipline during post-war reconstruction and reconstruction following earthquakes in 2001 and hurricanes in 1998 and 2005. Taxes levied by the government include a value added tax (VAT) of 13%, income tax of 30%, excise taxes on alcohol and cigarettes, and import duties. The VAT accounted for about 51.7% of total tax revenues in 2011.

El Salvador’s external debt amounts to about one-fourth of GDP. In 2012, El Salvador successfully completed a $461 million compact with the Millennium Challenge Corporation (MCC)—a United States Government agency aimed at stimulating economic growth and reducing poverty in the country’s northern region, the primary conflict zone during the civil war, through investments in education, public services, enterprise development, and transportation infrastructure. In December 2011, the MCC approved El Salvador’s eligibility to develop a proposal for a program for consideration.

Living in the capital city of San Salvador is typical big city living. This buoyant metropolis has great music and museums on offer, as well as trendy bars and coffee shops. But like most capital cities you have to contend with traffic congestion, higher crime rates and a higher cost of living and real estate. That being said, San Salvador has an energy that is positively infectious.

Santa Tecla is a small city, situated at the southern foot of the San Salvador Volcano. It is just 9 miles from San Salvador. A lot of expats choose to live here because of its proximity to the capital, but Santa Tecla is a thriving area in its own right with great architecture, culture, shopping and nightlife.

The small city of Suchitoto has always been favored by Salvadorans as a weekend getaway. Visitors can enjoy water activities on the Embalse Cerron Grande, a pretty man-made lake surrounded by hills. With its whitewashed colonial buildings and cobbled streets, it still retains much of its Old World charm. The arts and culture festival in February draws world class artists and performers to it every year. Expats from all over the world have been welcomed into this bohemian little town, and real estate prices are on the up.

San Salvador: A split level house in Santa Tecla has a covered garage for two cars. The main level has a living room, dining room, kitchen with pantry, one half bath, a terrace, and a rear and side garden. The second level has three bedrooms one with en-suite and one shared bathroom. The complex has a clubhouse, gym, swimming pool, tennis courts, basketball court and 24-hour security. Price: $100,000.

Suchitoto: House for sale in Barrio Concepcion, this newly built home is located just 2.5 blocks north of the central Plaza de Suchitoto. The complete house is tiled throughout and has one-and-a-half bathrooms and two bedrooms, a smaller dining room and a large terrace with view overlooking the lower Barrio Concepcion. Price: $100,000.

The Casa Vieja 1856 is one of the few existing old historic homes in Suchitoto and is located only one block south of the central plaza. This 1,968-square-foot home sits on an approximately 8,611 square foot lot. This property would make a great boutique hotel or restaurant. The owner has city approved plans and budget for a technical restoration of the main house which is estimated at $60,000. It may be possible to negotiate the cost of restoration into the price for the right buyer. Price: $500,000.

Most people skip this little country and head straight for its regional neighbors of Costa Rica or Guatemala. Stories of civil war and high crime rates put a lot of potential visitors off but the war ended 20 years ago and crime, although serious, is mostly limited to rival gangs with tourists virtually never involved. With 190 miles of coast, replete with warm, sandy beaches that are considered amongst the best in the world by surfers, El Salvador ought to be more renowned.

El Salvador today is a warm and friendly place…a place that has a lot of unexpected treasures. Due to its relatively quiet tourism industry, you can experience its charms almost by yourself—including lush cloud-forest trails, active volcanoes and sparkling lakes. Punta Roca, El Salvador’s most famous surfing spot happens to be one of the best right point breaks in the world, yet it is side-lined compared to lesser swells in Costa Rica and elsewhere.

With first-rate universities, museums and galleries, a vibrant bar and live-music scene, and an array of progressive NGOs, both local and international, San Salvador is a stylish and cosmopolitan capital.

Beachfront property here is inexpensive…you can buy villas just a few steps from the blue Pacific Ocean for less than $100,000. It’s a place of remarkable warmth and intelligence, made all the more appealing for being so unexpected. 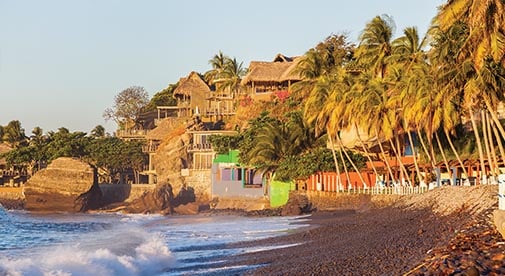 Early mornings are my favorite time in San Salvador. I love to sit on my balcony and watch as the city wakes up. In the hour just after dawn, you can still hear the call of geckos and the songs of birds. It’s never really cold here, but at that time, the air is relatively cool and the smell of fresh-baked empanadas de leche wafts up to my fourth-floor balcony.

With 190 miles of coast, replete with warm, sandy beaches that are considered amongst the best in the world by surfers, San Salvador ought to be more renowned. Beachfront property here is inexpensive…you can buy villas just a few steps from the blue Pacific Ocean for less than $100,000. But El Salvador has more to END_OF_DOCUMENT_TOKEN_TO_BE_REPLACED 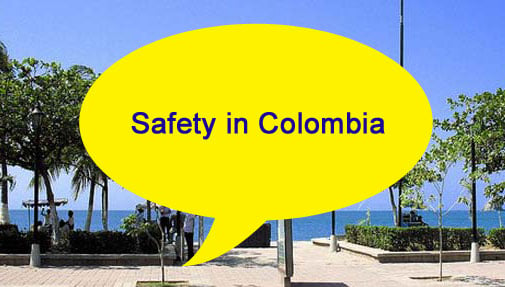