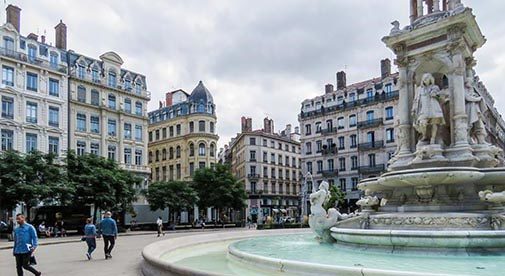 My first thoughts as I landed in Lyon were of food. After all, France’s third-largest city has a reputation as a gourmet’s playground—and this in a country that has turned food into an art form.

The city did not disappoint.

But it was as I got to Rue Mercière that the full force of Lyon’s culinary popularity hit me. This narrow pedestrian street is lined on both sides with restaurants, including many bouchons—traditional inns-turned-restaurants that are unique to Lyon. The buzz of activity combined with the mingling scents from a dozen different dishes had my head spinning.

Luckily the terrace of a nearby bouchon, Le Comptoir de l’Atelier, offered a handy place to sit and gather myself with an excellent glass of wine and some traditional Lyonnaise food. The local cuisine in Lyon is a little different than what you would expect to find in other parts of France. In place of the light, delicately arranged nouvelle cuisine of Parisian eateries, Lyon’s fare is heavier and heartier, tending toward meats, rich sauces, and potatoes. I opted for an andouillette sausage with potato and roast vegetables, accompanied by a carafe of red. At $35.50 total, it’s not cheap and cheerful but seriously succulent.

Not cheap and cheerful, but seriously succulent.

Other evenings in the city, I tried lighter fare such as the salade de chèvre chaud (goat’s cheese salad) that’s on the menu in practically every restaurant or magret de canard (seared duck breast). You can expect to pay between $15 and $40 per meal in general, depending on your choices, but the quality on offer is well worth it.

And if you fancy a break from French cuisine, there are plenty of international options available too. From trendy sushi bars to rustic Italian restaurants, you’ll find what you’re looking for in Lyon. (I cracked halfway through my stay and spent a fun—and delicious—evening drinking craft beer and eating nachos in an American-style bar for a change of pace.)

But there’s a lot more to Lyon than just the food, as expats will attest. Liz Redding and her husband, Michael, moved to Lyon from Albuquerque, New Mexico in March 2019 because they were looking for their next adventure. “We didn’t move here to save money,” Michael says. “We just didn’t want to sit on a porch in retirement.”

They are fans of the fact that, with its international airport, Lyon opens up the rest of Europe and beyond to visit. “We’re going to Copenhagen in April, Nice in June for the start of the 2020 Tour de France, and I have a trip to Delhi in November,” says Liz. “All very exciting!” 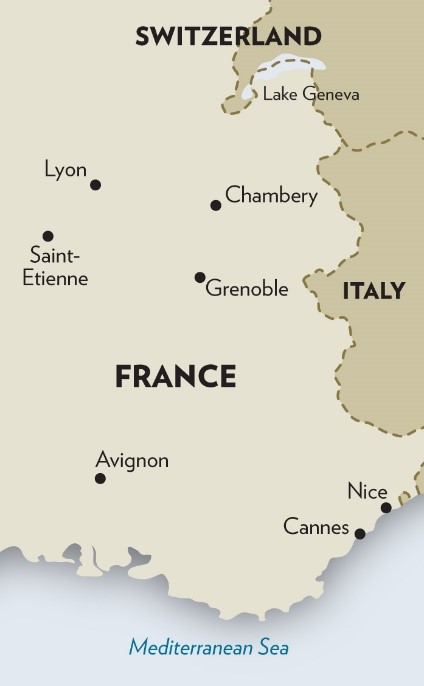 Not that there isn’t plenty to keep you busy in Lyon. There is a buzz about the city, aided by the fact that it’s a university town. The Université de Lyon generates a constant influx of young people to the city, which helps keep the music and creative arts scene alive. While I was there, the university students were just returning for the semester, and public squares like Place Bellecour were filled with crowds of excited—yet polite—young scholars. Posters for art exhibitions and theater shows jockeyed for my attention with billboards announcing international music acts with upcoming concerts.

While the presence of the university keeps contemporary, bohemian culture alive, there are also plenty of higher-brow, more established offerings.

The Théâtre des Célestins sits in the north of the 2nd arrondissement, directly across the river from the Cathédrale Saint-Jean-Baptiste. The theater is a beautiful building with a rich past, and it’s still active as a venue. At over 200 years old, it’s the longest continually used theater in France. Classical and contemporary shows are regularly put on by the municipality, some even with English subtitles that you can view from the balconies. You can pay as little as $10 or over $50, depending on the show and where you want to sit.

There are also plenty of organizations geared toward expats here. Michael in particular is a fan of the Rotary Club, which he says made it easy to meet new people when the couple relocated. Liz, meanwhile, loves the American Club of Lyon, which meets every Tuesday morning for a Coffee Chat in Le Perko Café. “It’s a great group of friendly people who welcomed us to their community and generously shared information that made our relocation much easier,” Liz says. “We hope to be able to return the favor to other new arrivals.”

There are some wonderful parts of Lyon that you can find if pointed in the right direction. My favorite discovery was the slopes (les pentes) of the Croix-Rousse district of the 1st arrondissement. These steeply sloping streets draw Lyon’s artistic crowd. During the day, café terraces are packed with people enjoying coffee and sunshine, and when the sun goes down the bars and music venues bring vibrant nightlife. You can expect to pay about $4 for a coffee in many places in Lyon and between $5 and $8 for a large beer.

The romance and history of Paris, without the crowds.

Another expat I talked to in Lyon was Caroline Conner. An entrepreneur originally from the San Francisco Bay Area, she organizes wine tastings from her converted 1800s silk factory apartment in the Croix-Rousse. “I love this neighborhood, and it’s one of the most desirable within Lyon,” Caroline says. “The apartment cost me probably a quarter of what a similar apartment in a trendy neighborhood in Paris, London, or San Francisco (my previous three home cities) would have cost. I put back in about a quarter of what I paid for it on the renovations, but I have expensive tastes.”

An apartment in a 19th-century building like Caroline’s would set you back about $385,000, before any renovations, but depending on the area you want to live in, there are more affordable options available. From a two-bedroom apartment in the residential 9th arrondissement to the west across the Saône river for $176,000 to a three-bedroom house in the modern, business-focused 3rd arrondissement to the east for $309,000.

Rentals run the gamut from one-room studio apartments popular with students from $450 a month to a modern, two-bedroom apartment with a view of the river for $2,770 a month. What you pay depends on the lifestyle you choose.

Another benefit of the Croix-Rousse neighborhood is that, sitting at the top of a hill to the north of the city, it offers a great view of Lyon. To get back to the city proper, you descend the slopes and, if you manage to avoid distraction from the cafés, restaurants, and bars along the way, you’ll find yourself back in the heart of the city within a 20-minute walk.

I spent my final day in Lyon exploring a historic part of the city center—the 5th arrondissement, which runs alongside the bank of the River Saône. The winding cobbled streets of this area are popular with tourists for good reason. Not only do the cafés and bars rival those of the slopes (if a little more mainstream and expensive), but there are plenty of sights to see—including the Basilica of Notre-Dame de Fourvière, which can be glimpsed from almost anywhere in the city as it sits atop a steep hill to the west.

There are two ways to get to the basilica. You can climb the stone steps that wind their way up the hill through narrow passages between and behind the historic houses. Or for a couple of euros, you can buy a ticket for the modern funicular railway. I opted to take the funicular up and the stairs back down—the best of both worlds and much easier on an unfit body like mine.

The basilica itself is impressive. Even though it’s a minor basilica compared to the likes of Sacré-Coeur in Paris, it’s charming, architecturally interesting, and a lot less crowded than its Parisian counterpart. And its position at the top of the hill gives another beautiful view of the city below.

My overall impression of Lyon is that— while it’s not the cheapest place in Europe to live—if you’re looking for a city with the romance and history of Paris, but without the crowds and at a more reasonable cost, this could be the place for you. The world-class food scene, easy access to cultural events, and close-knit and welcoming community of expats are the icing on the cake.