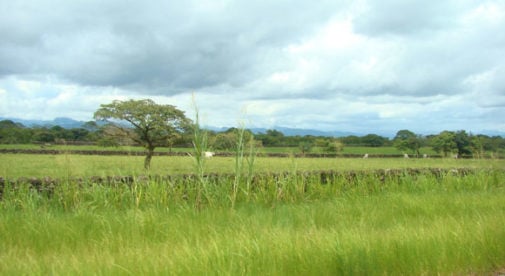 There are many low-cost places to retire to in Panama. For those who enjoy the slower pace of rural living, Chiriquí Province, where I live, offers a delightful climate, easy convenience, and a quality lifestyle in an affordable retirement destination. While the city of David offers all the amenities of a good-sized city and the town of Boquete is a favored expat haven, some of the smaller towns in the area combine access to these desirable features with a lower cost of living.

Dolega is one such small town in Chiriquí Province in western Panama. The four-lane highway that runs north and south between David and Boquete runs right through Dolega, so it’s easy to find. A new pedestrian overpass marks the main turnoff into town, at the Municipal Palace, shaded by a gigantic mango tree. Dolega is the administrative seat of the district of the same name, which encompasses a total of nine towns such as Los Anastacios, Dos Rios, Los Algarrobos and Potrerillos.

In the surrounding countryside you’ll see pasture land for cattle and horses and fields of plantings and flowers for local nurseries. Looking to the north you can see the outline of Baru Volcano in the distance on a clear day. Off to the east the layers of the Continental Divide hide in the haze, with rugged peaks broken up by flat plateaus.

Rural-Living at a Low Cost

Dolega is a typical rural town in Chiriquí, home to working families with modest houses. The central plaza features a soccer field outlined with a sidewalk and occasional benches. The main church stands on one side, overseeing the activities of its parishioners. Driving along the main street you pass this scene, and the speed bumps require that you go slowly so you can take it all in! The Police Station faces the central square, usually with a small gathering of officers and residents mingling near the open doorway. Further along, the elementary school is on the right, and at the edge of town rests the cemetery with its white stone tombs and colorful flower offerings.

But there’s not much more in Dolega, so most folks go to nearby David to work, shop and take care of business, and many older children attend private schools in David. As a result, public transportation is frequent, inexpensive and safe, with Coaster-style buses running constantly between Dolega and David, and taxis roaming everywhere for fares. Larger buses run a regular route from Dolega up to Boquete, stopping at all points in between. Bus fares are less than $2 and you could live in Dolega without a vehicle and have no problem getting around locally.

A Small Group of Expats

While Dolega does not draw a lot of expats, it does have its share. A much-loved bookstore, The Book Mark, sits on the west side of the highway in a residence framed by old trees. This business was opened by an expat over 15 years ago and became the best English-language bookstore outside of Panama City (and some would say in all of Panama). The founder has since passed on, the business is now up for sale, and those of us who rely on The Book Mark for our reading material sincerely hope a new owner comes along soon.

Just up the highway another long-time expat has an open-air restaurant, the Brandin’ Iron, where he prepares both local dishes and American favorites like pizza, burgers and sandwiches. A little bit farther on the right is Chiriquí Storage, a self-storage facility and home of the monthly Flea Market that attracts crowds of Chiricanos (natives of Chiriquí Province) and foreigners alike.

An American-owned canine center is located outside of town on the way to Potrerillos. Howling Success K-9 Center offers obedience classes, grooming services and boarding for all breeds of dogs. And if you feel like exploring just a bit more, the turn-off toward Volcan will take you to The Zapadora, a unique home furnishings and décor showroom created by an adventurous woman from Australia.

If you’re looking for property here, there isn’t any agency dedicated to Dolega, but realtors in both David and Boquete have property listings for sale and for rent in and around Dolega.

House prices start at less than $100,000 for a modest two-bedroom home, and rents are affordable at around $400 a month for a furnished two-bedroom property. A few new housing developments have increased the supply of affordable housing in this area, and for those who want to build you can find well-priced lots or acreage.

Dolega may be a good choice for those seeking low-cost living in a quiet environment, and for those willing to adapt to the local community, while at the same time being close enough to the commercial center of David and the social center of Boquete to enjoy them both.