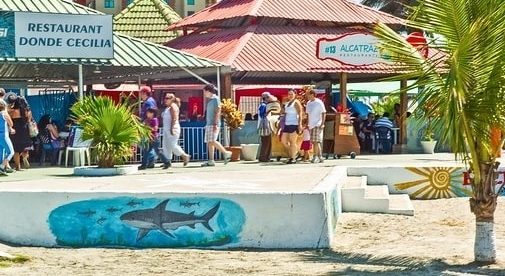 There are many types of food prepared in a variety of cuisines in Ecuador. You could spend a long life sampling the dishes available, and it would be a life well spent indeed. There is one particular aspect of Ecuadorian dining that I really enjoy. You can find it all around the country, and each area has its own special take. Best of all, you won’t spend much money having wonderful and healthy meals.

I’m talking about the almuerzo, also sometimes called the executivo. It is a lunch special, offered at most restaurants for the midday meal. It is not always on the menu, so before we order lunch, we always ask first if there is an almuerzo.

You can think of these as the lunch special, or what back in the day was the “blue plate special” at the lunch counter. Most places the details vary from day to day, depending on what they have available, but they generally cost between $2 and $3.50 per person, and include several courses.

Typically, you will first be served some kind of simple soup or broth. Next, a plate is served with meat or fish, a small salad of some sort, rice, plantains or potatoes, and a beverage (usually fresh juice). Sometimes there will even be a bit of fruit or small sweet pastry as dessert. The fun is in the variety of combinations you find. I really enjoy ordering the almuerzo without bothering to ask what it is today—why spoil the surprise?

Let me give you two examples. On a recent trip to the southern village of Vilcabamba, my wife, Rita, and I chose a small Ecuadorian restaurant for lunch in the town square called La Esquina. The almuerzo there was unique, in that you could choose your entrée. Rita chose the tortilla de camaron, which is shrimp fried with eggs to make a large, thin omelet. I chose the seco de carne, similar to beef stew, only less vegetable and not much liquid.

Our waitress returned a few minutes later with a pitcher of fresh lemonade and two glasses. Next up, our soups arrived. We were served a delicious bean and lentil soup, with potatoes, carrots, and small pieces of pork. It was almost a meal in itself, as it was quite rich and hearty.

When our entrees arrived, Rita thought she was in trouble. Her tortilla almost covered her entire plate, so much so that her rice, potatoes with herbs, and lime-soaked shredded red cabbage were served on a smaller plate. I only got one plate, but plenty of food, with the tender, stewed beef and gravy poured over top of my rice.

Everything was delicious, and much to my amusement, Rita did manage to finish her entire meal, although she protested she was stuffed afterwards. Our total bill for this fantastic lunch for two was just $7.

Closer to home, there is a local restaurant about three blocks from us in Salinas called Marazul. We enjoy eating from their menu as well, as they have great Ecuadorian meals at reasonable prices. For example, Rita’s favorite is a creamy shrimp soup for $6. One of my favorites is their $8 filet mignon meal—they also make great ceviche and pizza.

For lunch however, I love to spin the wheel and try their almuerzo. I’ve also noticed when we have been there for lunch, that is what most of the locals do as well.

On my last visit, I got a great surprise.

My soup was a fish broth, with a few small pieces of yuca and potatoes. As is often the case with soups, it also had a chunk of choclo, similar to corn on the cob, floating in it. It was served with a chilled glass of fruit juice. The best part, however, was the entrée—fried calamari. Perfectly done, not chewy at all, and served with rice, fried plantains, and a small simple salad of thinly sliced lettuce, cucumbers, tomatoes, and onions in a vinaigrette.

Everything tasted fresh and wonderful, with lots of flavors in the dishes, and the lunch cost me only $3. I have had fried calamari appetizers in the States that cost more than twice as much, and tasted less than half as good.

Almuerzos are a great way to get a healthy meal and a range of flavors, for just a few dollars per person. In Ecuador, as in most foreign countries, if you want to eat well, look and see what and where the locals eat.