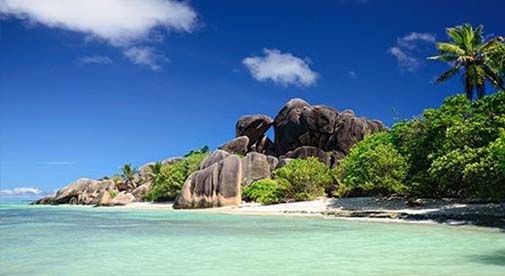 Glossy magazine photos of La Digue are what dreams are made of, and the reality delivers. ©iStock/alxpin

Just beyond the French doors is a terrace framed by turquoise surf lapping onto the shore. A coconut palm stretches over the water, and craggy boulders reach into the blue sky. This is The Seychelles, also known as “the Garden of Eden,” 1,000 miles off the east coast of Africa.

Images of gigantic granite rocks jutting out of the shimmering Indian Ocean had embedded themselves in my memory bank decades ago, but the distance, and exorbitant travel costs, always made the Seychelles seem beyond reach.

Things change. I was recently able to explore the three main islands that the French first colonized in the mid-1700s. The white-sand beaches juxtaposed against lush jungle-clad mountains did not disappoint.

The largest and most varied island in the Seychelles, Mahé is home to about 70,000 people (90% of the nation’s total population). Still, the island retains its tranquil beauty, with 3,000-foot mountains and a lavish arsenal of breathtaking beaches.

My two favorites are on opposite sides of the island. Beau Vallon, on the northwest coast, is the most popular spot on the island. It’s a lively beach town, ringed by clear water and a coral reef ideal for swimming and snorkeling. My beachside lunch was a heaping plate of piping hot Creole mussels gratin and French fries (more than I could eat) and a beer for $10.50.

Anse Royale was my favorite Mahé beach. Postcard-perfect, the end of the bay with its giant granite rocks and turquoise water is often empty. I reached this beach by local standing-room-only bus for 50 cents. It wasn’t exactly a “chicken bus,” but it was a memorable experience as the driver careened on the narrow, winding road while we passengers clutched the overhead bands for dear life.

It took an effort to tear myself away from the beaches to experience more of the island. I rented a car and drove around to explore. Two mountain passes allow you to meander up into Morne Seychellois National Park. A word of warning—the thoroughfares are not for the faint of heart.

I stopped at the Tea Factory, Morne Blanc mountain, and Mission Lodge to admire vistas of Port Glaud lagoon on the west coast, and Victoria on the east.

Victoria, the smallest capital in Africa, is best explored on foot. The colorful city spreads out from the Victoria Clock Tower, constructed to look like the one housing London’s Big Ben. Sights include the kaleidoscopic Arul Mihu Navasakthi Vinayagar Hindu Temple, a bustling local market, and the botanical gardens.

The sleepy island of Praslin is the second-largest in the Seychelles archipelago but is very different from Mahé. Anse Lazio is its best-known feature, often turning up on lists of the world’s most beautiful beaches.

In front of me were the turquoise waves; behind, a thicket of takamaka trees; to the right were more of the granite boulders so common in the Seychelles. At a shaded outdoor beach bar I lazily dug my toes into the sand and sipped a cocktail.

Praslin is also home to 4,000 cocos de mer, an exotic, endemic plant that prompted the belief that the Seychelles were the true Garden of Eden. It produces the world’s biggest nut, which you can find at Vallée de Mai Nature Reserve rainforest. You’ll also find black parrots there, of which there are fewer than 900 left in the wild.

The smallest of the three main inhabited islands, La Digue has a tranquil Creole vibe. To get around the island, bicycle and ox cart rentals are available.

Arguably the most beautiful beach in the world.

Visiting La Digue has been on my bucket list for most of my adult life. Famed for being one of the most photographed beaches on the planet, I pored over photos of Anse Source d’Argent beach in glossy magazines for years.

Arguably the most beautiful beach in the world, the water does not have the waves of Anse Lazio, but calmer, pale-emerald water washes up on its shores. It’s so clear, the rock formations below give the appearance of a coral reef.

A jungle path led me to this dazzling white-sand beach, framed by massive pieces of granite protruding into the sky, which also provide a shady respite from the blazing sun. The delicate atmosphere made me feel like I was on another planet. I didn’t want to leave.

Visiting on a Budget

Contrary to popular belief, a visit to the Seychelles doesn’t have to break the bank. My lovely boutique B&B on the beach in Mahé was $160 per night for an oceanfront double room with balcony and breakfast included, and a rental car was $68 for the day.

It costs $55 to take the ferry to Praslin and $65 for the ferry to La Digue. Costa Cruises offers a two-week cruise throughout the Indian Ocean with three full days in the Seychelles for around $1,600. To save on meals, eat at local establishments instead of luxury resorts.

Food wagons set up on popular beaches, and the most affordable eating options in Victoria are in and around the Sir Selwyn Clarke market, with numerous take-away places serving Creole or Indian food for less than $12 a serving. If you’re on Beau Vallon beach at the weekend, an open-air market offers affordable produce and meals.