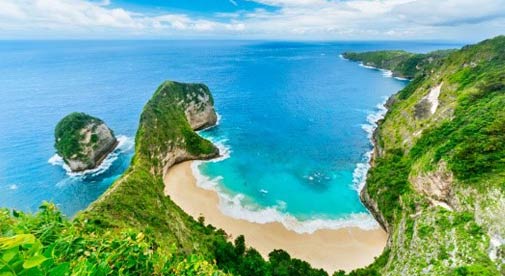 The archipelago of Indonesia is comprised of over 17,000 islands, many are uninhabited, and while Bali receives most of the attention, all of them are stunning in their own right. White- sand beaches, even pink-sand beaches in some cases and palm trees make a great backdrop for an early morning sunrise or lazy sunset drinks. With many religions, the islands are a melting pot of traditions and culture, making island hopping in Indonesia a great option.

Nusa Lembongan and Nusa Ceningan are separated by a shallow channel and linked by a yellow bridge which is only wide enough for pedestrians and motorcycles (Nusa means island). Nusa Penida is the larger island and accessible only by boat. The island has become a bird sanctuary for many of the endangered bird species of Bali, due to a program by the National Park Foundation.

Many areas around the islands are suitable for diving and snorkeling. There is abundant marine life and healthy coral…and the turquoise waters are inviting and clear. There are a number of popular surfing breaks, which can become crowded. The coastal landscapes of all the islands are mostly low-lying limestone cliffs with some dramatic cave formations. The northern end of Lembongan is fringed by a mangrove forest.

The local culture is very much alive and you’re always welcome to join the colorful ceremonies, and to listen to the gentle gamelan music coming from the many temples scattered all over the islands. The men clothed in their sarongs and the ladies in their traditional dress carrying their towering offerings on their heads…even on the back of a motorbike.

Nusa Lembongan is known as the biggest seaweed producing area in Bali, with farming introduced to the island in the 1980s. The landscape of Lembongan, with its clear waters and strong currents make it an ideal place for the cultivation of seaweed. This industry provides an income for the local community who usually sell it for under $1 per kilogram. Though the seaweed industry is slowly waning as tourism becomes more profitable for the people, you can still see the farms on Jungut Batu and in the channel between Lembongan and Ceningan.

Getting to and from the islands is best by boat, with fast-boats leaving Sanur regularly ($40 return). Renting a motorcycle is the best way to get around on the islands. Cars are available but the roads are not great. There are local supermarkets for basic needs, and few ATMs are located throughout the islands. Most produce is shipped over from the mainland.

There are many local warungs for affordable dining, with trendy bars and restaurants now appearing on Lembongan and Ceningan. Mount Agung is even more majestic from a vantage point overlooking Jungut Batu, where the main boat stop for the islands is. Sunset over the turquoise waters is just stunning. Perch at one of the bars and enjoy a cocktail and a bite to eat and have the camera ready to capture the perfect shot.

Just to the north of Lombok are the islands known as The Gilis. The three distinctly different islands, Meno, Trawangan, and Air each have their own characteristics. You’ll find powdery beaches, crystal clear blue waters rich with underwater marine life, and sea turtles will often swim close to shore. Don’t miss the blue lake in the center of Gili Meno. The three islands lie close to the equator and as such offer a tropical climate all year round.

Only a two hour fast-boat ride from Bali, the Gilis are situated close to the island of Lombok.  The boat ride will cost around $60 return, once you arrive savor the scenery. Sit on the shores of Trawangan at sunrise and the mountainous ranges of Lombok are directly before you, with the towering Mount Rinjani, an active volcano, rising through the center. As the people of Gilis and the people of Lombok are primarily Muslim, the haunting call to prayer wakes you just before dawn and you’ll also hear it throughout the day.

The islands are one of the most popular destinations within Indonesia, but not so long ago they were semi-deserted, a place where only occasional travelers would visit. ATM’s were only introduced to the area in 2008 and electricity was only initiated in 1994. Development is creeping in now though, fortunately in a tasteful way that still keeps intact the laidback lifestyle and a simple life.

You won’t hear a single car or motorbike, it’s very different to Bali or Java. The Gili islands remain motor-vehicle free, with the only means of transport being horse and carriage or push-bikes, and only just recently electric bikes have been introduced. The islands are small so it’s easy and safe to walk anywhere you need to go.

The turquoise waters will entice you, with snorkeling and dive trips easy to organize. Ride in a traditional Jukung boat, put on your flippers and masks, and dive into warm clear water, where below the surface you’ll find Butterfish, Clownfish, and Sea Turtles, with bright coral still to be seen despite the increased tourism. Underwater sculptures named Nest, which were produced by world-renowned underwater sculptor Jason de Caires Taylor, and were gifted to the local community can be found off Meno. The marine life has thrived, they’re spectacular though crowded, but a definite must-see. A whole other world exists under the sea and it’s well worth taking the time to explore.

Hotels and homestays are dotted all over the three islands, with accommodation costs starting from $40. Most of these are on the fringes of the islands so you have spectacular views from most places. Restaurants and cafes can easily be found with western tastes and local foods being catered for.

Flores is a destination often overlooked by many. It’s an island of traditional villages and where the Flores culture is still very much alive. Flores means “flowers”, believed not to be named for its fauna but more so for the colorful coral found beneath the ocean.

You’ll find there are many languages spoken here, at least six different dialects in fact, along with Indonesian and English in most parts. The people of Flores are almost entirely of Christian faith, different to the majority of Indonesia which is Muslim. Flores is located to the east of Sumbawa and to get there it’s a short one-hour flight from Denpasar or Jakarta. Flores Island is large, spanning over 13,000km, so allow yourself some time to explore. Flores is a relatively quiet, and not so focused on tourism like the island of Bali, but this is part of the attraction.

Labuan Bajo is the town most used as the gateway to Flores, located on the western tip of the island. The airport is located here and it’s also home to the main harbor.  Getting around is best done with an experienced driver, as the roads can be hazardous to navigate on your own. From Lambaun Bajo you can access the many other islands which surround Flores.

The calm, turquoise waters make it an ideal place for diving and snorkeling. Visit Pink Beach, one of only seven pink beaches in the world. Tiny fragments of red coral combine with the white sand, giving the pink effect that is visible along the shoreline.

The biggest drawcard to the area is Komodo Island, where the National Park is home to the Komodo Dragon, the giant lizard. Tours can be taken and should be done with a guide for your own safety as they’re known to be feisty. While you’re here visit Padar Island for incredible views, snorkel at Pink Beach, or swim with the manta rays at Manta Point.

In Ruteng, the Spider Web rice fields are spectacular. The lingko rice fields are used for wet-rice cultivation, and many rituals and ceremonies surround the planting and harvest cycle.

In the traditional village of Wae Rebo, you’ll find the “hobbit cave”. A limestone cave where in 2003 archaeologists made significant finds dating back at least 13,000 years. Also, worth the trip, are the Kelimutu Lakes. Three lakes where the water color changes periodically due to different elements with each lake.

Accommodation varies across the island from plush hotels to traditional homestays. For a memorable time, spend a few days on a well-equipped yacht cruising the beautiful islands.

Lombok is an island separated from Bali by the Lombok Strait, one of the busiest shipping channels in the world. Similar in size to Bali, it’s home to over 3 million people and a popular destination for tourists and expats. The International airport is located in the south of the island, a flight from Bali or Jakarta is under one hour. Fast boats can also be taken from Padang Bai on Bali Island, with the journey taking around three hours.

Mt Rinjani is the second-highest volcano in Indonesia, and even though it’s active, there are still daily tours to the Crater Lake and regular hiking trips too.

Navigating the island is easy, with well-developed roads making self-driving an option or hire an experienced guide to help you get around.

The most developed areas for tourism are the towns of Senggigi, the western coastal strip close to the town of Mataram. These towns are a just over an hour’s drive from the airport with transport easy to find. Senggigi has some great dining options and many hotels provide an array of accommodation. The beaches are dotted with local vendors who aren’t pushy like their counterparts in Bali, and enjoy having a chat.

Kuta is also known for its beautiful beaches and good restaurants, with many surfers seeking the perfect wave and enjoying the slow-pace. Close by you can explore the dream beaches of Mawun, Tanjung Aan, and Selong Belanak.

In contrast to Bali, Lombok residents are mostly Muslim, and you’ll see grand mosques everywhere. The Sasak are the indigenous people of the island, with a fascinating culture. You may see wedding parades, or the “Gendeng Beleq”, a street parade with loud musicians. Indonesian and English are widely spoken.

Along with the three Gilli islands, there are around 17 other islands close by.

Your A-to-Z Guide to Bali

Cost of Living in Bali