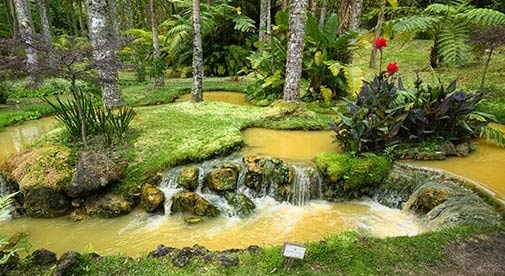 Furnas Hot Springs in the Azores aren’t quite in the tropics, but they certainly look the part. ©Dreamstime.com/VidalgoPhoto

If Hawaii and Ireland had a love child, the Azores is how the baby might look.

The nine-island archipelago is located almost 1,000 miles from mainland Portugal. Columbus stopped here in 1492 on his famous journey. Round-the-world sailors still do. The capital, Ponta Delgada, is a short 4.5-hour flight from Boston, Providence, or New York.

In terms of budget, Portugal is the great bargain of Europe; and the Azores is the bargain of Portugal. Many of the sights you’ll want to see are free or very inexpensive. Having only five days, my three travel companions and I opt to concentrate on the largest island, São Miguel.

The home we’ve rented is in the western part of São Miguel, in the town of Candelaria, about a 20-minute drive from downtown Ponta Delgada. It has three floors, three bedrooms, a large yard, a garden, and an ocean view. Total cost for five nights: $685.

The Gulf Stream keeps the temperature in the Azores remarkably consistent—never too hot or cold. As a result, nature has a chance to shine. And shine she does.

One example is hydrangeas. Blue, white, purple…the distinctive clusters of flowers are everywhere, most noticeably along boulevards and avenues, and accessorizing the miradouras (scenic viewpoints) along the highways up the coast to Ponta da Ferraria.

Picture a black rock beach leading to a natural ocean pool. A rugged cliff flanks one side, glowing in the late afternoon sun. The far side is open to the ocean, and waves cascade in. Bathers hold onto ropes tied across the pool every 20 yards or so.

The pool’s waters are heated by thermal springs. Pick your desired temperature. Enter the pool near the shoreline and the water is quite warm. Swim towards the sea and the temperature drops.

Between the parking lot and the beach is a sign written in Portuguese. None of us speaks Portuguese, but we decide later it says, “Warning: Please pick your jaw off the ground before entering. It’s dangerous to swim with your mouth open.”

You can smell the Furnas Hot Springs before you see them. The aroma of sulfur lets you know you’ve arrived. The sights, sounds, and smells of boiling mud and gurgling geysers feel like going back in time to when the earth was young. If a dinosaur had strolled along it wouldn’t have seemed out of place.

Next to these caldeiras sit a series of holes in the ground. Early each morning, pots of Portuguese stew containing pork, chicken, sausage, beef, kale, and potatoes are lowered into the holes and covered. Seven hours later the pots are removed and the feast is served in local restaurants. For $30, three of us eat the equivalent of Thanksgiving dinner, with enough left over for two subsequent meals.

After lunch we waddle over to the Poca Da Dona Beija spa, a series of pools whose waters are warmed by hot springs. The water is orange due to high iron content, and each pool is a different temperature. Some bathers spread iron-tinged mud paste on their face and body and soak for hours. This is black belt-level relaxation.

Visiting Seta Cidades allows for spectacular views of Lagoa Azul and Lagoa Verde (Blue Lake and Green Lake). Awaiting us at the first viewpoint is a San Francisco-grade fog. But this is the Azores. In less than the time it takes to visit the restroom, the fog lifts and reveals Lagoa Azul. It’s breathtaking.

Over the next five hours we hike, climb, and race to the next lookout. Around each bend is another enchanting view, made even more picturesque by changing skies. A misty lagoon leads to a windswept meadow, revealing a sun-dappled mountain— with cows grazing at such a preposterous angle it looks like they’ve been stapled in place.

Next, we drive to the harbor in Ponta Delgado. Pedro Rodrigues, a fishing boat captain with Trilhos da Natureza, is expecting us. Big game fish abound here, including marlin, swordfish, and tuna. But since only one member of our party is a practiced fisherman, we vote to stay close to the coast and lazily troll for bluefish and barracuda.

We catch only four barracuda, one of which we keep, but we don’t care. Pedro entertains with stories of the sea, as well as island and family history. The sky and the sea are so brilliantly blue—and the air so clean—it feels like I’m wearing polarized sunglasses. And seeing the island from the water reveals beauty unrevealed on land. As we turn for port, dusk has snuck up on us. The rocky cliffs and small towns are aglow in golden, late-day light.

A 20-minute drive along the coast from the village of Ribeira Seca leads to the Gorreana Tea Plantation, which has been in operation since 1883. Even if you don’t like tea, the ocean views and lush landscapes make this a worthy stop. We do a quick factory tour followed by a tasting.

On the drive home, two more miradouras demand attention. By now I’ve changed the name miradoura to meudeus, (Portuguese for “My God!”). That’s my reaction to the extreme beauty on display.

Getting to the Azores

Unless you have access to an Atlantic-class yacht, flying is the best method or getting to the Azores. All the main islands in the Azores archipelago have commercial airports. However, only two offer direct international flights. The most popular hub is Ponta Delgada airport on São Miguel, the largest island.

At time of writing, Ponta Delgada airport is served by the Portuguese national carrier, TAP Portugal, with flights from Lisbon and Porto on the Portuguese mainland. Azores Airlines connect with Frankfurt, Germany, as well as London, U.K. The budget carrier, Ryanair, operates a seasonal service to London Stansted, meaning that your most affordable option may be a flight from the U.S. or Canada to London, then onwards with Ryanair to São Miguel. It’s not a practical option if you want to get there quickly, but you could add a stay in the U.K.’s capital to your trip this way.

Flying directly from North America to the Azores is easier than you might expect. Delta Airlines offer affordable flights to the Azores from just $469 round-trip. That’s a sample round-trip fare in June from New York (JFK), which is a nonstop route. Other Delta flights to São Miguel depart from Boston, Atlanta, Los Angeles, and San Francisco—those departure points require a stop in New York.

From Canada, Air Azores offer a daily nonstop flight from Toronto to São Miguel. Flight time is just shy of 12 hours, and roundtrip fares can be had from around $700 (CAD).