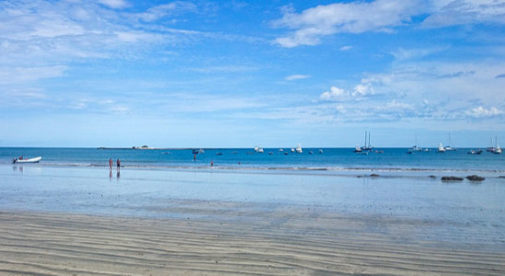 Graham Cooper first became an expat when he moved from his native England to Toronto, Canada in 1972, to pursue what would be a long and prosperous career in mechanical engineering.

When he became eligible for retirement after 30 years with the same employer at the age of 55, he didn’t hesitate. “I figured, why would I work any longer if I can retire now,” Graham reflects. “My company offered me a nice retirement package including my pension and health benefits until I die, so I took it and planned to pursue my passion for travel.”

He didn’t actually have any plans of retiring elsewhere until his travel bug brought him to Costa Rica in early 2013. “I had done a lot of research and was really drawn to the country for the sheer variety of wildlife. I planned a six-month trip that would allow me to explore many of the different regions Costa Rica has to offer,” Graham says. “During that trip I discovered Tamarindo and immediately felt at home.”

Graham returned to Canada but after just two months he realized he couldn’t picture living out his retirement in any place other than Tamarindo. He returned in October 2013 and has been here ever since.

“I’m able to live here comfortably on my social security and pension. I don’t really need to worry about generating supplemental income unless I want to,” he says. “I would say I spend the bulk of my monthly budget on travel and entertainment and if I weren’t living here, I probably wouldn’t be able to do that.”

Graham ventured to Costa Rica on his own and says there are plenty of ways to live on a budget here. He, for example, has been able to find a condo with a roommate where his portion of the monthly rent and utilities usually only costs between $400 and $450 per month.

He says the biggest draw to Tamarindo for him was the beautiful beaches in the area and the abundant wildlife.

But there was something else that truly sealed the deal. “I’ve traveled a great deal, and I’ve never felt welcomed anywhere the way I feel in Tamarindo,” he says. “The locals were immediately friendly and helpful and the sense of community here makes it very easy to meet people and build a network.”

One of the most difficult parts of moving to Costa Rica for Graham was leaving family and friends behind. “You leave a lot of people back home, I have a daughter back in Canada, and of course I miss them,” he said. “But also the experience of moving abroad gives a unique opportunity to build friendships with people who do become your family.”

As for health and happiness, Graham has noticed some changes in himself since his move south. “I actually used to love the winter in Canada. I used to ski and snowshoe, but as I got older I started to experience arthritis pain as soon as the weather would turn cold. Since I’ve moved to Costa Rica, I haven’t experienced any of that pain,” he says. “I also notice in general, I’m happy and content. I feel like this country has taught me true happiness.”

With a passion for travel, Graham finds Costa Rica’s location in Central America is perfect. “I can buy a direct flight and be back in Canada in half a day to visit my family, and I can also explore new places pretty economically.” Graham was recently able to use Costa Rica’s bus system to travel from Tamarindo to Bocas del Toro, Panama, and the trip cost him just $27.

“I’ve lived here almost three years, and I know I’ll live my life here now. It feels as much like home as anywhere else for me,” smiles Graham.