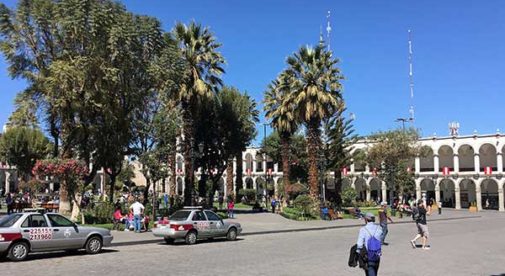 When my wife, Nancy, and I decided to move to Peru, we didn’t have a lot of interest in seeking out those places where huge expat communities were already thriving. Maybe we are pioneers at heart.

We chose Arequipa as our starting point. We knew we could easily move elsewhere if we didn’t like it. It’s hard to beat Arequipa for its climate, with over 300 days of sunshine a year and temperatures in the low 70s F for most of the time.

The furnished three-bedroom condo we rented was as much an art gallery as a place of residence. With floor-to-ceiling ceramic sculptures in several rooms and huge paintings gracing every wall, it was hard to believe that we were only paying $600 a month. And we could have easily found smaller and/or unfurnished places for less.

It was on an exploratory trip of the north coast that first year that we ended up on Huanchaco beach for the first time. As we were sitting there basking in the warm sunshine, sipping on our Pisco Sours and watching a bunch of kids playing in the sand, we looked at each other thinking the same thing. Why not?

We liked Arequipa a lot but the nights were a little too chilly for my Southern wife. She likes the big city life, or at least easy access to it. I’m a small-town boy and have always wondered what it would be like living in a beach community. Huanchaco ticked off more of our boxes than Arequipa. A small town on a beach only minutes from a major city.

The next day we signed a lease for a furnished three-bedroom apartment about three blocks from the beach for the same monthly rent as our Arequipa condo. But this time it would also include internet and all utilities. It would kick in in four months when our Arequipa contract ended. The move from Arequipa only took us two days and was the cost of a couple of overnight bus tickets.

Temperatures in Huanchaco hover around 70 F for most of the year. Summer highs can reach into the low 80s F but rarely drop below the mid-60s F, even during the coldest month of the year. I’m writing this at the end of May and I can’t honestly remember the last time I wore anything other than shorts, t-shirts, and sandals. I know it was at least eight months ago.

There are no bugs or creepy crawlies. We leave our doors and windows totally open from the time we wake up until we go to bed at night. The most we ever have to deal with are one or two flies that manage to find their way into the apartment during the day.

I can vaguely remember actual rain only a couple of times since we have moved here. Once in a blue moon we will have a five-minute mist. We can actually sit on our balcony and watch individual water drops fall from the sky during these rain “showers.”

As a result, there is never a heating or cooling bill. You won’t find heaters or air conditioning units in many, if any, houses or apartments. That makes a big difference to our monthly bill. The only extra household expenses we have are drinking water and natural gas for cooking. Twenty liters of water delivered to the door in a refillable bottle costs us three bucks; gas is $10 a tank and lasts us a couple of months.

The beach is only a five-minute walk away. Although rough and rocky near the town center, it stretches as far as the eye can see and changes to expanses of smooth sand within a half-mile in either direction. Although it can get crowded during weekends and high season, the rest of the time the town is empty. But we like it that way.

Huanchaco is a small town but the city of Trujillo (pop. ~ 800,000) with all its amenities is only 15 minutes away by bus at a cost of less than a dollar. The international airport is about the same distance away and regular flights head to Lima daily. In less than an hour we can be in the Lima airport and heading to countless national and international destinations.

Everybody has his or her own vision of paradise. For some it’s white sandy beaches and warm turquoise calm water in an expat haven. For us it’s crashing surf and a friendly fishing/surfing village on the isolated north coast of Peru. Nancy got her big city, I got my small town, and we both got the beach. We may not stay here forever but we have signed a lease for another year.

Where is Peru? And Other Fun Facts You May Not Know…

Peru: One of the least expensive countries to live in South America