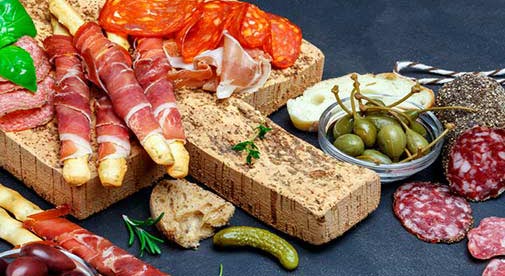 One of the joys of eating in Parma is the constant sense of surprise and discovery, even when you’re ordering foods you’ve known (or think you’ve known) since childhood. You’ll find that here, even the most familiar-sounding cheeses are richer and more flavorful, made with pure, fresh ingredients using processes that date back centuries. The salumi (cold cuts) are delightfully free of chemicals and additives, letting you taste the natural richness of the meat. The pastas are crafted by hand and topped with sauces that are classically Italian, yet reveal the influence of nearby France in their elegant seasoning and soupçon of butter.

You’ll spot these popular local specialties on menus throughout the city, from stylish restaurants to cozy, backstreet trattorias, and in specialty shops, market stalls, and family homes. Enjoy them as the locals do, savoring each delicious bite, knowing this is some of the finest food the world has to offer.

Artisans figured out how to make this superlative cheese 800 years ago, and every generation since then has been wise enough not to tamper with perfection. There are only three ingredients: milk from cows raised in a designated area on local fodder, salt, and calf rennet (a natural bovine enzyme that helps curds form). The milk must be very fresh, and once it’s formed into curds and shaped into wheels, it’s aged on wooden shelves. The result is a complex, fruity, nutty taste that completely transcends the bland saltiness of mass-produced, pre-grated parmesan cheese. Don’t pass up Parmigiano-Reggiano offered as a stand-alone appetizer, especially if it’s drizzled with barrel-aged balsamic vinegar from nearby Modena.

Locals will tell you that the sweetness and suppleness of the local cured hams is due to the breezes that float up from Tuscany, softening as they pass through the olive and pine groves in river valleys, drying in the high mountains, and absorbing the perfume of chestnut forests before arriving in Parma. Perhaps this is why the quality of the cured ham from this region has been famous since Roman times. Today, prosciutto di Parma is most often enjoyed as an antipasto, accompanied by slivers of melon or the slender breadsticks known as grissini.

Less famous, unattractively preserved in shapeless lumps, and given an unalluring name that means “Little Ass,” cultatello di Zibello is arguably a more delicious cured ham even than prosciutto di Parma. It hails from the nearby town of Zibello, where cold winters and thick fog rolling off the Po River are said to boost its sweetness and fragrance. Is it truly superior to its famous cousin? Why not order a little of both and decide for yourself?

Sampling the salty-sweet richness of local cured hams is best done while sipping a wine with a touch of sweetness, a good dose of acidity, and a bit of bold fruit flavor, and among the best of these is the local Lambrusco. Some consider this red wine to be frivolous because it’s frothy, frizzante (slightly sparkling), and designed to be drunk while young (the wine, that is, not the person drinking it). Well, what’s wrong with being frivolous once in a while?

You may find your ham and other salumi served with small, hot squares of fried dough known as torta frita. Originally dusted with sugar and served as a dessert (hence the name, which means “fried cake”) these eventually lost the sugar and gained a pinch more salt to become a staple on family dinner tables and restaurant menus. The region’s most classic aperitif (a drink taken to alert the stomach before a meal) involves a glass of Lambrusco, a plate of torta frita, and salumi. Buon appetite.

Every grandmother in Parma can produce, at a moment’s notice, mouthwatering fresh pastas such as tortelli, anolini, and tagliatelle. They say it’s in their DNA, and who are we to question that wisdom? One of the most popular pastas in the region is tortelli di erbetta, a kind of small ravioli filled with ricotta cheese and herbs, topped with burro (butter) and Parmigiano-Reggiano cheese. It has been famous since Renaissance times, and after one bite you’ll know why.

In Medieval Parma, this little round pasta filled meat and cheese was a luxury only wealthy families could afford. The name means “little hats” and refers to the round, pointed headgear worn by Spanish soldiers when they invaded Italy in the 17 th century.  Today cappelletti pasta is a popular favorite, especially during winter, when it’s served in a rich meat broth at large family gatherings and holiday celebrations.

The Venetians found the Malvasia grape on the Greek Islands in the 13th century and brought it back to mainland Europe, where it found its way to northern Italy and was transformed into “the queen of Parma wines.”  A vivacious, delicately sparkling white wine, Malvasia is lovely with antipasto or the main meal; its sweeter version is often paired with light, fruity desserts. And because it’s low in alcohol (10.5%), it’s a favorite for leisurely outdoor luncheons on warm, lazy days.

Legend says that back in the fourth century, Saint Ilario was returning to France after exile in what’s now Turkey when he stopped briefly in Parma. The long walk had left his shoes in tatters, and a kindly cobbler gave him new ones. In the morning the cobbler discovered the old shoes left behind by the saint had turned to gold. Today, Saint Ilario is Parma’s patron saint and his January 15 feast day is celebrated with decorated sugar cookies in the shape of scarpette (shoes), which you’ll find in every bakery.

No visit to Parma would be complete without a taste of gelato. Invented by an Italian chef in the late 17th century, gelato is churned at a slower rate, incorporating less air, so the texture is denser and the flavor richer than other forms of ice cream. Parma is blessed with many excellent artisan gelato shops, but locals identify two as particular standouts: La Romana and La Gelateria. The shops are located around the same traffic circle, so if you can’t make up your mind which to try, taste samples at both until you find your favorite flavor.

Things to Do In Abruzzo, Italy