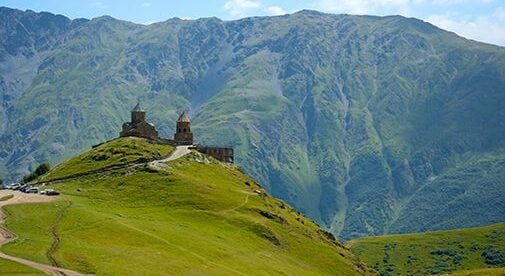 The vistas in Georgia are dramatic, making it a rewarding option for an outdoors vacation. ©iStock/Madzia71

The sun beat down as we reached the rugged ridgeline where Tbilisi’s Narikala Fortress has stood since the 4th century. In the late-afternoon light, the ruins seemed as if they were blushing.

Farther down the path, the 65-foot-tall Mother of Georgia statue (Kartlis Deda) beckoned us to approach. Standing guard over Georgia’s capital city, the aluminum figure holds a bowl of wine in one hand, and a sword in the other—a fitting symbol for a country that is celebrated for its hospitality, but that’s had to fend off invaders for many centuries.

In recent years, outsiders of a different sort have been flocking to Georgia, enticed by the country’s ancient winemaking tradition, its soaring mountains, and its rich culture—itself a product of Georgia’s Europe-meets-Asia geography. Also appealing: a free 365-day tourist visa on arrival for Americans and Canadians, and an ever-increasing number of flights linking Georgia to Europe.

Home to about 1.2 million people, Tbilisi is a dynamic city that marries traditional and modern architecture. The Narikala Fortress, which is accessible via cable car or footpath, is the perfect place to get your bearings. From the top of the Sololaki Ridge, you’ll spot buildings with lacy wooden balconies, the brick domes of sulfur baths (under which there are hot springs), and the conical roofs of old churches. (Orthodox Christianity is the predominant religion, and Georgia is one of the world’s oldest Christian nations.) The eye-catching Peace Bridge, a wave-like structure crafted out of steel and glass, crosses the Mtkvari River.

During our four-month stay in the Caucasus, my husband, Shawn, and I used Tbilisi as our home base. This allowed us to partake in a variety of experiences in the city. One night, we headed to Tbilisi’s magnificent neo-Moorish-style Opera and Ballet State Theater to watch Abesalom and Eteri, a Georgian opera that’s long been the season opener. With sumptuous costumes, engaging music, and an appearance by Georgia’s world-famous Sukhishvili dancers, it was a magical evening. Tickets started at 10 GEL ($3.35), but we splurged and bought balcony seats for 40 GEL— about $13.50 (see: Opera.ge). We rounded out the evening with dinner at Café Stamba, a sophisticated spot serving up Georgian classics such as adjapsandali and international favorites like mushroom risotto.

The Georgian National Museum is one site you shouldn’t miss while in Tbilisi. The treasury, its star attraction, has a spectacular collection of gold jewelry. Some of it was unearthed in Colchis, a gold-rich land in western Georgia that was mentioned in Greek mythology as the place where Jason and the Argonauts went in search of the Golden Fleece. The museum also showcases folk costumes, remains of the most primitive humans to be found outside of Africa, and a wing devoted to the Soviet occupation of Georgia. Tickets are 15 GEL ($5.05).

Georgia declared its independence from the Soviet Union in 1991, and in the decades since, Tbilisi has been experiencing a rebirth. While some districts like Abanotubani and Marjanishvili feature polished Old World buildings, you’ll still see a significant number of enchanting diamonds-in-the-rough if you step away from the touristy streets.

We also found Tbilisi to be a great hub for embarking on day trips, overnight getaways, and 10-day jaunts to the neighboring countries of Armenia and Azerbaijan.

The Georgian cities of Mtskheta and Gori are two great day-trip destinations, and both are accessible by train. Mtskheta was Georgia’s capital for a few hundred years, and today, it’s best known for its impressive religious buildings. The Jvari Monastery, Svetitstkhoveli Cathedral, and Samtavro Monastery are all included on UNESCO’s World Heritage list.

A bit further afield is Gori, Joseph Stalin’s birthplace. For a glimpse into the Soviet propaganda machine, you can visit the Stalin Museum, which displays Stalin’s train carriage, his childhood home, and Soviet-era paintings. Tickets are 15 GEL ($5.05). Gori also has a fortress, and the city is just a few miles away from the fascinating cave city of Uplistsikhe, which is definitely worth a visit. Tickets cost seven GEL ($2.35). There are several such cave cities in Georgia, but Uplistsikhe is the closest one to Tbilisi.

Tasting Wine From a Qvevri in Kakheti

Georgia proudly proclaims itself as the “cradle of winemaking” and there is archaeological evidence to suggest that wine has been made in the territory for at least 8,000 years. Traditionally, Georgian wine has been produced in a qvevri, an earthenware vessel that’s buried underground.

Kakheti is Georgia’s foremost winemaking region. You could spend weeks exploring Kakheti’s wineries, churches, and castles. It’s also possible to make a day trip to Kakheti from Tbilisi. In order to maximize our time, we did a full-day excursion with Gamarjoba Tours. The tour included stops at three diverse wineries, where we tasted a variety of lovely Georgian and European-style wines. (A kisi and a saperavi were my favorites!)

We also had a few hours to wander the cobbled streets of the town of Sighnaghi. Dubbed the “City of Love” because it’s a popular wedding destination, Sighnaghi has atmospheric defensive walls, as well as commanding views of the Caucasus Mountains and the valley below. There were eight of us on the wine tour, and our tickets cost 60 GEL per person ($20).

Hiking in the Heart of the Caucasus

If you see just one promotional poster featuring Georgia, chances are that it will feature the tiny Gergeti Trinity Church dwarfed by a snowy Mount Kazbek, Georgia’s third-highest mountain. Stepantsminda (also known as Kazbegi) is the town where visitors flock to see this iconic scene. They then ascend to the 14th-century church to enjoy the panorama of majestic mountains that surround it.

While many tourists ride up to the church as part of a day trip tour, I highly recommend traveling to Stepantsminda independently. That way, you can spend at least one night and hike to the church yourself. If you’re fit, the walk is not difficult and takes about two hours each way. We passed a crumbling old watchtower on the way up, and once we got to the top, we enjoyed a picnic. On the grassy slopes near the church and far from the parking lot where all the tour buses unload their passengers, we soaked up the serenity of our surroundings. We saw a shepherd tending his flock, horses grazing, and birds of prey soaring overhead.

Stepantsminda is roughly four hours from Tbilisi by bus, mini-bus (marshrutka), or taxi. During the journey, you’ll ride on the dramatic Georgian Military Highway, which links Georgia to Russia. The route cuts through breathtaking mountain passes and the ski resort area of Gudauri, offering glimpses of centuries-old watchtowers and flocks of sheep.

We traveled to Stepantsminda via marshrutka (10 GEL; $3.35) and decided to share a taxi with two travelers on the way back to Tbilisi (25 GEL/$8.45 per passenger). For reasons of comfort, safety, and flexibility, I highly recommend taking a taxi. On request, our taxi driver even stopped at the Russia–Georgia Friendship Monument, a colorful 1980s-era site that offers jaw-dropping views of the valley below.

Currency: Georgia uses the lari (GEL). While credit cards are accepted by some businesses, you should always have a sufficient supply of cash—especially small bills—on hand. For meals, metro transport, museum tickets, and lodging for two adults, expect to pay about 284 lari ($99) per day. These are midrange costs for Tbilisi.

Getting There and Around: Tbilisi Airport is served by several airlines, both major and discount. Georgia’s second city, Kutaisi, is served by discount carriers Ryanair and Wizz Air. We flew into Kutaisi and spent a few pleasant days there exploring the city’s fresh market and the 11th-century Bagrati Cathedral.

We rode Georgia’s trains whenever possible. Though you can view timetables online at Railway.ge/en, it’s wise to purchase your train tickets in advance at the train station. To get around Tbilisi, we regularly used the city’s inexpensive and reliable metro system. One ticket costs .50 GEL (about $0.17). We also found the taxi app Bolt to be indispensable for obtaining fixed taxi fares.

Finally, there are the humble marshrutka. These minivans make intra-city journeys and also travel long distances. Marshrutka fares are inexpensive, but these buses are often uncomfortably crowded. Ordering a private taxi (even for long distances) is usually a more comfortable alternative, but always confirm the price beforehand.

Accommodation: We stayed in one-bedroom apartments almost exclusively, using Airbnb and Booking.com to find them. The properties we chose were modern and comfortable. In Tbilisi, our favorite accommodation was located in the New Tiflis area, a central location that offers good metro connections, an array of supermarkets, and restaurants. Our apartments were on a pedestrianized section of Agmashenebeli Avenue, and a month’s lodging in November cost $485.

Giving Back: If you are fond of animals, consider being a dog chaperone on your flight back home. Dog Organization Georgia, a not-for-profit rescue organization, pairs travelers flying on set routes (usually the U.S., Canada, and Western Europe) with homeless dogs (with medical clearance) who have new owners waiting for them. DOG takes care of all the arrangements and there is no fee for passengers (see: Facebook.com/dogorggeo).

The Colorful and Unique Food and Wine of Georgia