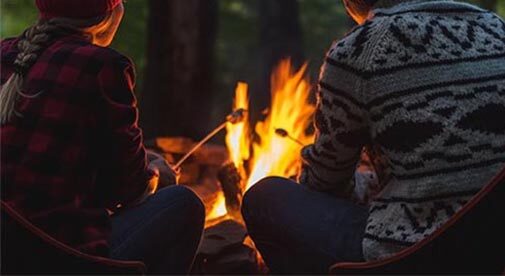 Glamping gives you all the good bits of camping, but without the discomfort. © MundusImages/iStock.

As the sun dropped behind a ridge, the patchwork of brown and green fields and pastures a thousand feet below us faded into darkness. It was time to leave the overlook while we could still navigate the rough dirt roads down the hill and head back to camp, nestled in a narrow valley filled with pine trees, for s’mores and a sing-along. At bedtime, the kids huddled in their sleeping bags, telling stories until they drifted to sleep.

A classic camping experience. But not the usual location. In fact, it wasn’t camping at all really, rather “glamping” (glamorous camping). It’s a trend that has gained popularity around the world in recent years, featuring yurts on Big Sur in Northern California, luxury tents on African safari, and treehouses in the rainforests of southern Costa Rica.

The idea is to enjoy the fun parts of camping, like enjoying nature, spending time with friends, and, of course, gathering around the campfire, without having to sleep on a leaky air mattress or be content with hot dog cooked on a stick for dinner. Not to mention not having to worry about setting up a tent, which can be an interesting process if it’s been years since you pulled the musty thing out of the garage.

My first, but certainly not my last, glamping experience was at El Nidal (Elnidal.com.mx), in the countryside outside the city of León, in central Mexico. It’s about two hours from my hometown, the expat hub and well-preserved colonial city of San Miguel de Allende, making it an easy weekend getaway. You reach the glampground on narrow roads that wind their way up the mountains through rural communities. Cellphone reception is quite spotty; make sure your GPS is set when you begin the drive. On our journey home Sunday morning, we noted several motorcycle groups and car clubs speeding down the curvy track.

Run by a couple, she from Uzbekistan and he from Mexico, El Nidal is not what you would call conventional luxury. But as a guest, I certainly felt well looked after in every department. Sleeping quarters were built from converted shipping containers, with full bathrooms, small kitchenette, and two comfortable beds (one loft single and a queen-sized underneath). Though they weren’t somewhere you’d want to spend much time if you weren’t sleeping, they were quite snug.

If your family doesn’t fit, as mine didn’t, you have the option of putting up a tent in front, which is where my kids slept; it was their first time sleeping in a tent, so they were quite happy about it.

Referred to as “nidos” (nest in Spanish), the containers were circled around a small pond featuring resident ducks and floating pink and yellow lotus flowers that bloomed in the late afternoon. The centerpiece was an open-air dining area under a palapa with 20-foot long tables and an open-air kitchen that was running from sun up to sun down every day.

Traditional Mexican dishes were cooked over open flame, breakfast, lunch, and dinner. In the smoker there was pork belly and fall-off-the-bone pork shank… the best I’ve ever had.

As elsewhere in Mexico, the salsas were spicy but a perfect accompaniment. It’s serve yourself and all-you-can-eat for $23 per adult for two meals a day (which was more than enough), including fresh juices like jamaica (a tea made from dried hibiscus flowers) and guava, as well as my favorite, café de olla, which is a delicious blend of coffee with panela (unrefined cane sugar) and cinammon—no cream or further sweetening needed—served in a clay mug.

This was the gathering spot, from morning to evening, and with such good food and drink it was tempting to linger all day. And there were hammocks everywhere, perfect for an afternoon nap or reading a book. But there is also plenty to do if you want to stay active. You can hike in the hills and along the shores of calm lakes. ATV rental is just $30 per hour, and there’s horseback riding too.

After a hard day on the trail, El Nidal offers relief as well. They brew their own craft beer; the pale ale is excellent. They make their own wine. They even create their own artisan liqueurs, including a schnapps-like concoction made of the tuna (cactus fruit), as well as mescal, which is similar to tequila and also made from the agave plant but with a smokier taste. No mixed drinks here; you take them straight, sipping from clay shot cups. You could enjoy it all at mealtime, take some bottles home (which we did), book tasting tours, and keep an open tab going throughout your stay.

It was a joy to live essentially outdoors for the weekend.

El Nidal’s owners take pride in everything they do, which is especially evident in the level of service and hospitality and the quality of the food and drink. That’s a hallmark of glamping. And the setting was perfect. With central Mexico’s dry, temperate climate and pine tree covered mountains rising around us, it was a joy to live essentially outdoors for the weekend. And it cooled off enough at night for a sweatshirt and a campfire—that’s where the s’mores come in. They had all the fixings ready to go.