Millions of Americans, Canadians, and Europeans visit Mexico every year. But the vast majority head to the coasts, to vacation hot spots full of resorts and bustling beach towns like Cancún, Puerto Vallarta, and Cabo San Lucas.

But Mexico is a large country, about one-fifth the size of the U.S., and has a lot more to offer than margaritas under a beach umbrella.

One of the country’s hidden charms can be found in its interior, about four-hour’s drive northwest of the capital, Mexico City. The town is called San Miguel de Allende, and it’s located in the Colonial Highlands region. It offers a lot of benefits: temperate climate, low cost of living, an active expat community, welcoming locals, charming local cultural traditions, and a focus on the arts.

The setting is beautiful. Its colonial centro is a UNESCO World Heritage site. So it is mandated that homes, churches, civic structures, businesses…just about every original structure…retain its historic, original appearance. And that is strictly-enforced here. Even signage for businesses is discrete. Narrow streets, cobblestone or flagstone, are lined with homes in shades of yellow, red, orange, and brown terracotta, barrel-tile roofs. It might be tough to drive a car here, but it’s certainly a pleasant place to take a long walk, exploring the architectural splendor that includes grand homes with wrought iron bars and imposing wooden doors, baroque churches with carved archways depicting religious scenes, and more.

Thanks to its beauty and peaceful atmosphere, along with all the other benefits, San Miguel is certainly no stranger to expats—they make up about 10% of the 125,000 residents in the wider metro area. These days the population swells during the North American winter, when Canadian, American, and European “snowbirds” flock to town for the great climate. 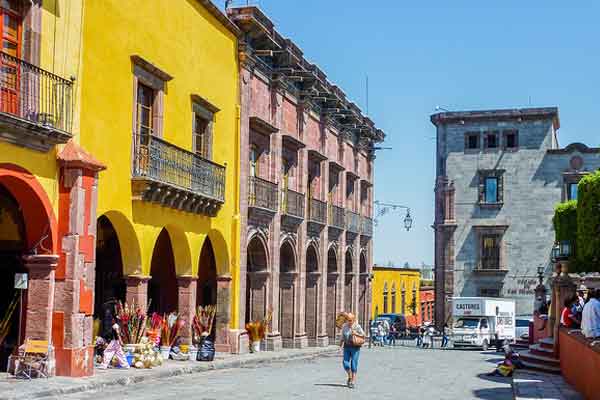 As you turn a corner you’ll more often than not come into plazas and parks filled with shady trees and benches. These are hives of activity with food vendors, couples strolling hand in hand, playing children, and chatting retirees. There is guaranteed to be at least one shoe shine stand.

Behind plain doorways and windows with wrought-iron bars are hidden treasures. Colonial homes are historic inside and out, although the renovated ones have updated electric and plumbing, as well as high-speed internet. Interior courtyards with gardens and fountains, intricate decorative tile work, vaulted ceilings with the original timbers…you’re living in history.

Because it’s in the high sierra, the air is crisp and clean. And the climate is temperate year-round, staying in the 70s F most days and cooling down at night to the 50s F. Only in January and February will you experience colder months, with comfortable days and dips close to freezing on the coldest nights.

There is also high quality and low cost medical care available. Well-regarded doctors, dentists, and medical clinics are located in town, with large hospitals and specialists available in the nearby city of Queretaro, about 45-minutes’ drive away.

The epicenter of life for expats and locals is El Jardin, the main plaza and park in front of the famous red gothic style church known as La Parroquia. In the colonnaded buildings surrounding the park are cafés and restaurants where you can enjoy a café con leche (coffee with milk) and people watching. 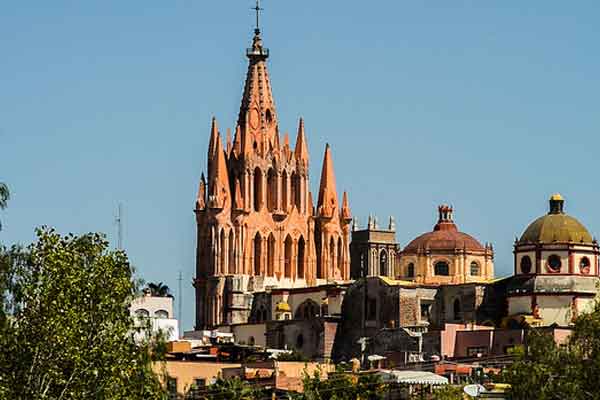 What calls so many expats to San Miguel in particular? The same reasons that the town’s first foreign residents came right after World War II. They were veterans who came to take art classes in local institutes—it was covered by the GI Bill. Since then it’s been a favorite destination of artists, musicians, and others interested in art and culture.

Today it has a thriving arts scene with live theater, lectures, book clubs, live music performances, foreign and independent films theaters…and more galleries showcasing modern and folkloric art than you can count. Whether you’re a participant or spectator, it’s a great scene for art lovers.

There are also great restaurants. The influence of tourism and the relatively large expat population means you can find everything from street tacos for about 75 cents and simple meals in local restaurants for a couple of bucks, to cuisine from around the world, including Italian, sushi, vegetarian, as well as gourmet options. 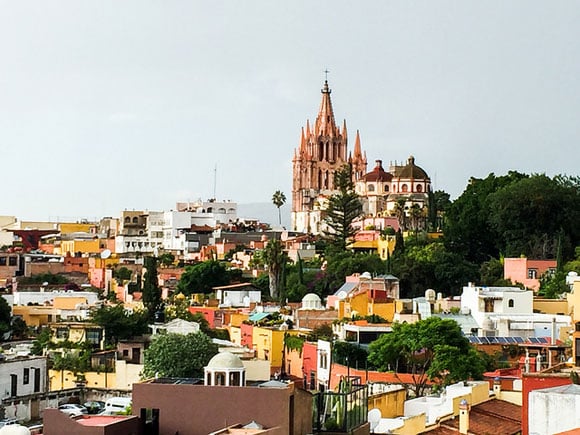 There are plenty of affordable real estate options in San Miguel de Allende. But the closer you are to the heart of the colonial centro, the plaza known as El Jardin, the higher the price. Expect to pay about $350,000 and up for a restored colonial home, with two or three bedrooms, in the best neighborhoods in town.

But go to the outskirts of the colonial zone, still in safe and nice areas, and you’ll pay much less. For example, a one-bedroom apartment will go for $169,000. From there it’ll still be a five to 10-minute walk to the restaurants and entertainment options and cultural activities in the historic area. Head to the outskirts of town, but still a 20-minute walk to downtown or a five-minute taxi ride (for $3), and you’ll find modern homes for bargain prices. Here you’ll easily find a three-bedroom home for around $200,000 and up. 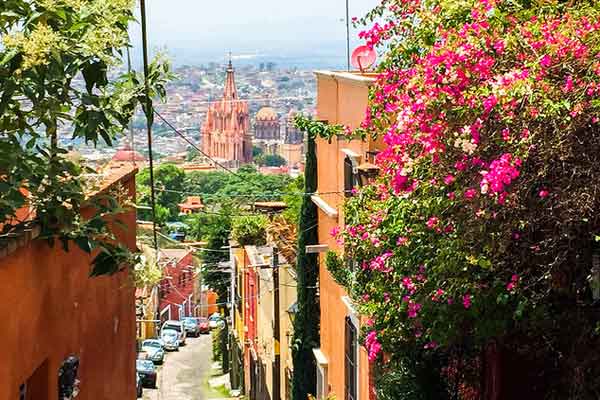 The low cost of living carries over to daily expenses and monthly bills as well. Rents start at about $800 per month for a two-bedroom apartment for a long-term lease. This will put you on the outskirts of the historic centro. Keep in mind that during “high season,” from January to April, it is very hard to find a monthly rental and prices do go up. If you’re interested in living in the city at that time of year, it’s best to reserve a place early.

Local markets offer fresh produce in a lively atmosphere at a low price. A retired couple could fill their fridge with fruits and veggies, plus meat and chicken, eggs…whatever they want, for about $25 a week. With the pleasant climate, there’s no need for air conditioning or heat, so electric bills are low.

Going out is cheap too. Even at “high end” restaurants you won’t break the bank. It’s hard to spend more than $40 to $50 per couple for a nice meal with wine and pre-dinner cocktails.

Here’s an example of a monthly budget for a couple living in San Miguel de Allende: 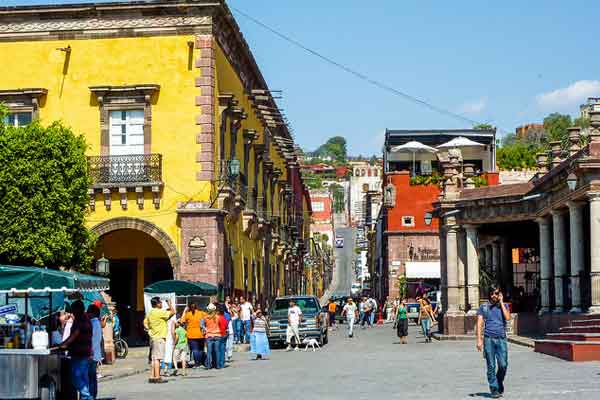 We walk a lot, in our new home of San Miguel de Allende. The narrow streets of the centro make navigating this highlands town in central Mexico by car, tough. And, since we can walk everywhere we want to go anyway, my wife, Liz, and our family just take to our feet.

Taxis and Ubers are cheap and easy if we don’t want to walk back after an afternoon in the historic district, especially when we’ve stopped in the market on the way home to buy some fruits and veggies—we can get too much to carry comfortably, for about $5. And besides, we don’t want our just-roasted rotisserie chicken ($4) to get cold. After an adjustment period to account for the higher elevation (6,000 feet) and all the hills, which left us out of breath, I feel like we’re in better shape since moving here from the coast.

Being on foot, you notice things you normally wouldn’t, too. Whenever you walk out your door in San Miguel de Allende and stroll down the street…you never know what you’re going to find. Thanks to strict regulations against garish signage for businesses, you usually have no idea what’s around you, until you walk past a window and look in or poke your head in an open doorway, or step into a courtyard. Coffee shops, restaurants, art galleries, spas…it’s all around you. If we find something cool, I make note of the street address, so I can find it again later.

Walking forces you to slow down, and really get to know the town—and not just because you’re navigating narrow sidewalks and cobblestone streets (always wear sturdy shoes). We also run into people we know all the time…and that’s usually an occasion to grab a café con leche or sit at a bench in a plaza to chat, while our kids play.

We’re living in history here, with centuries-old churches, civic buildings, convents, and monasteries…and festivals that have been going for hundreds of years, taking place every week. Just the other night, we heard drums booming down the road from our house…fireworks going off…and church bells tolling. We walked outside to find a parade honoring San Miguel Arcangel (the Archangel St. Michael), the patron saint of the town.

We’re gearing up now for “Day of the Dead” on Nov. 1 and 2—it’s said to be one of the best celebrations in Mexico of this national holiday.

Thanks to its location in the heart of Mexico, San Miguel de Allende, is a great home base for exploring nearby notable towns and villages. Dolores-Hidalgo, is the birthplace of Mexican independence, and hosts a huge celebration every year on Sept. 15 and 16…but any other day, it’s a quaint little village to stroll around, famous for its ice cream. Nearby Mineral de Pozos is a former silver-mining center. Once a virtual ghost town (and there are still plenty of majestic ruins), its reputation as an artists’ colony has grown in recent years

And you can’t forget Guanajuato, whose colonial center is in a narrow valley. This October, we plan to see at least some performances that are part of the Cervantino, a weeks-long arts festival, featuring international artists and performers from around the world.

Of course, since we live in one of the most developed parts of Mexico, I must admit that we also enjoy heading for trips to some of the big box stores and malls in Queretaro, a major metropolis of 1 million, about an hour’s drive away. My kids love the arcades, trampoline parks, and other fun stuff.

It’s like we have the best of both worlds—modern conveniences with plenty of historic charm.