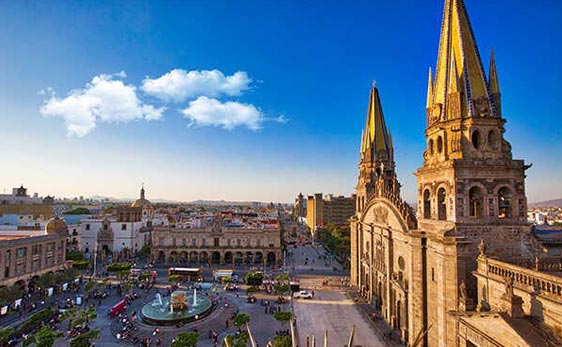 Guadalajara, Mexico: A City of the Old and New

Guadalajara is a city of 5 million, second in size to Mexico City. Founded in 1542, it is a lively, modern city that contrasts the old and new. It is the capital of Jalisco, famed for its tourist destination of Puerto Vallarta, and is a central hub for technology and business, which accounts for the city’s uber-modern business center. Mexico is known for several things that started in Guadalajara: Mariachis, tequila, and birria. If you enjoy either goat (birria) or tequila, Guadalajara is a place to visit. But there is so much more to this vibrant city.

Best Things to Do in Guadalajara

To start with, consider taking the double-decker bus tour that travels to many of the most popular sites in the city. This tour is helpful to orient yourself when you arrive. With so much to see, getting a sense of what is most important is helpful. Both in the historic and modern quarters, the city has numerous churches, buildings of note, and museums to visit.

The feel of the town is one of bright people going about busy lives. Students, writers, and business people crowd into cafés and eateries to visit with friends and talk about ideas and the world. It is an exciting town.

On Sundays, the biggest outdoor market happens in the neighborhood of Tonala. Many of the areas now a part of greater Guadalajara were once separate towns, as was Tonala. A tianguis, as they are known here, is an open-air market, and this is a big one. For those who like a bargain, and the colors and people-watching of markets, this is for you. Food, toys, gifts, birds, local medicinal remedies, and household goods can all be found here. Think of a tianguis as a giant swap-meet or flea market but with both new and used products. It is vibrant, fun, and filled with people and activity.

If all this shopping builds up an appetite, in addition to street food, there are numerous restaurants and coffee shops for those who wish to dine without walking through the market. It is well worth a visit. Take a Didi (like Uber but less expensive) and save driving through the bustling streets.

In addition to the tianguis on Sundays, you’ll find another large market—which is more of a farmers’ market with many upscale vegan and organic products (soaps and other body care products)—just across the border from Guadalajara into Zapopan. It is held on Saturdays from 11 a.m. to 3 p.m. As with many farmers’ markets, consider getting there early as, by early afternoon, some of the favorites may be sold out.

This area of Guadalajara is my version of heaven. It is an artist’s delight. If you go on a weekend, the place is thronged with tourists from Mexico and elsewhere. If you want a quieter experience, go on a weekday. Again, it is better to take public transportation (which Guadalajara has in abundance) or take a Didi. Driving in Guadalajara is not for the newcomer.

Tlaquepaque is a town of artisan shops selling everything from artwork, clothes, and decorative household goods. It is easy to spend a day or three wandering the streets and exploring the shops. On my first trip to the area, I decided to go on a tour with Angel Peña through Airbnb ([email protected]). The tour was an excellent choice. Angel is from the neighborhood and is very familiar with what is available to see, eat, and do.

We started with breakfast, and Angel encouraged me to try Café de Olla, which was delicious. Then we went on to the gallery of Sergio Bustamante. I strongly recommend doing this. The gallery changes the artwork every couple of months, so each time you visit, it will be different. After this, we wandered through the streets on the way to the square, complete with trees, benches, and people relaxing and eating their elote (Mexican street corn) and other goodies. If you have not tried coctel de elote, I strongly recommend it. A woman on the line with me joked, “It is addictive!” She was correct.

From the square, we went to a beautiful restaurant, La Mata Tinta, which had a diverse and delicious menu. According to Angel, it is a must to try the mole and mescal. Mole is a specialty of Oaxaca but can be ordered in many other towns. It is an ancient recipe with many ingredients, and all are considered healthy. The two dominant ingredients are chocolate and chili, which for the uninitiated may sound odd. I assure you it is not.

There are so many artisan shops, the Pueblo Magico of Tlaquepaque is a necessary trip. Angel was the perfect guide. Angel’s English is perfect for those of you who do not speak Spanish.

Getting out of the City: Bosque de Colomo and Via Recreativa

The Bosque is an ultimate urban park. It is in the northeast of the city and accessible by Didi or bus (expect to take about 45 minutes from the center of town). It is between Guadalajara and Zapopan and is considered the city’s lungs. There are buildings, art pieces, and many walking trails throughout the park. As a New Yorker, it was reminiscent of Central Park, with activities and people unwinding from the urban world. The park is well kept and safe, a great place to take a walk or sit in the Japanese Garden and relax. The atmosphere is tranquil and unhurried. So, after a couple of days of wandering through the city, take a break and go to the park for an afternoon.

Guadalajara makes it possible for the urban population to have fun and recreation away from a typical cityscape of traffic and noise. On Sunday, the city closes down a street for the Via RecreAtiva from 8 a.m. to 2 p.m. for running, biking, and dog walking. Recently there was a new section added to the zone for this. You can check in to see what is most recent and what activities may be happening on Facebook at Via Recreativa Guadalajara. In addition to simple Sunday recreation, there are marathons and runs of all lengths held here.

The Puerta de Hierro is an area you won’t want to miss. It is considered by many to be the wealthiest and most elegant of any region in Mexico. There are stores that rival any urban center in Europe or the United States. If you enjoy shopping, you will want to visit the Andares Mall and the Palacio de Hierro store or The Landmark for very upscale shopping. The architecture is modern but exciting, with some of the city’s most novel modern architectural designs. Again, take a Didi. The people who have never navigated a Guadalajara glorieta (or roundabout) do not want to try this. I was in a Didi and was struck by the speed and complexity of the glorieta.

In the city’s historic center exists another kind of area that is both urban and old. Many of the buildings, including the Huespiocia Cabanas, were built when the city was established. The Huespiocia Cabana was an orphanage for many years, but is now a museum. The Huespiocia is a vast sprawling museum with a collection of art dating from colonial times. In front of the museum, a large plaza opens up to the city’s center; modern art and people enjoying their Sunday mix while children play in the fountains. Walk around and enjoy the street food. Yes, it is safe to eat at the small vendors. The city is hotter than Mexico City, so prepare for this and wear layers if you will be out early till late.

At night, visit and Zona Chapultepec, a central-city area with an abundance of restaurants and bars. It comes alive at night with people strolling the area and eating in the excellent outdoor restaurants. During the day, walk the streets of La Americana to view the elegant homes and quiet streets. In Mexico, during the pandemic, many businesses stayed open due to strict adherence to mask mandates and cleaning protocols, preserving people’s livelihoods and the public’s safety.