Located on the east coast of the peninsula, the city of La Paz hugs an inlet from the Sea of Cortez and expands in rings to the south. Starting at the water is the famous Malecón which stretches three-and-a-half miles east to west providing a beautiful area to stroll and enjoy the sunshine. Surrounding the Malecón are boardwalk restaurants, artisans selling off carts, hotels, and marinas. This is the most tourist and English-speaking friendly part of La Paz. 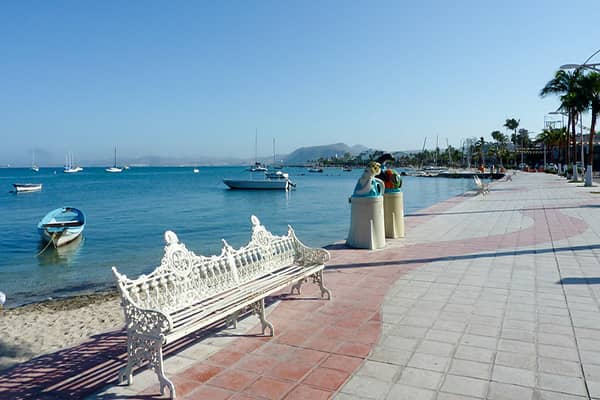 Heading south and within walking distance from the malecón is the next ring, old town La Paz. Traditional brick buildings line every street. Across Highway 1, the next section of the city finds La Paz beginning to feel like a modern urban city. Local businesses bump against shopping malls. Here you can go shopping at the U.S. mainstays like Walmart, Sam’s Club, and Home Depot, along with the Mexican superstore, Sorian Híper. The bustle of the city can be felt here. The final ring is one of expansion and breath. Universities, industrial parks, and multiple real estate developments for the growing population fan out from the southern-most part of the city.

Currently the traffic in the last two rings of the city is a bit congested. One of the reasons for this is that the main highway for all of Baja California runs into the city before heading further south. Plans are underway to create a city bypass which should relieve some of this traffic.

Although the capital city and the hub of commerce, do not expect any high rises in La Paz. Much of the heart of La Paz is old-world architecture and therefore only a few floors high. La Paz is more of a sprawling city, known for its breath, not height. Driving from the malecón to the southern end of city checkpoint takes about 30 minutes. The county of La Paz stretches further than that. The La Paz county boasts nearly 8,000 square miles of space making it the fourth-largest municipality in all of Mexico.

Although a very rustic appearing city, La Paz is leading the way in renewable energy. In 2013, an initiative was started to move La Paz to 100% renewable energy. Already in use, the first 39-megawatt solar plant generates 82-gigawatt hours a year, equivalent to 65% of the city’s power consumption.

International air travel is easy due to the La Paz Manuel Márquez de León International Airport. La Paz also hosts a ferry to take passengers, cars, and cargo to and from the mainland.

Unlike Todos Santos, Cabo San Lucas, and San Jose, the other major cities in BCS, La Paz is a city of commerce, not tourism, at least for now. Currently, La Paz is truly a Mexican city. Except in the malecón area, be ready to use your Spanish skills. Although everyone is helpful and friendly, English is not as well known here as it is in other parts of BCS. For some this could be a challenge. For others it is the opportunity to truly experience living in a different culture. Over the next few years, however, we may see the culture of La Paz shift. La Paz has plans to open cruise ship ports increasing its tourism. The city has also authorized private investors to open two new marinas, one with 200 slips, which may change this city of commerce to yet another tourist destination.

Locals and tourists alike view the malecón along the Sea of Cortez inlet as a respite from the bustle of city life. Spanning nearly three-and-a-half miles, the malecón is one of the top tourist destinations and one of the weekend mainstays for locals. Over 60 restaurants are within walking distance from small coffee or fresh juice stands, to authentic Mexican, Chinese, and Italian establishments. Many art galleries and quaint museums also surround the Malecón. Whether you bike, jog, or just like a leisurely stroll, the Malecón is a great place to reinvigorate the soul.

What is surprising about La Paz is that although it is a larger urban city, it is also the launchpad for ecotourism in the region. Just a short boat ride from La Paz is Isla del Espiritu Santo (the island of the holy spirit) a UNESCO World Natural Heritage Site and National Park. Explore the main island by foot to uncover volcanic rock formations, indigenous Pericú archaeological remains, a diverse range of reptiles, birds, and flora, and of course beautiful pristine beaches. Snorkel or dive among the sunken boats and natural reefs that flank the island. Take a relaxing kayak ride to view the island from the water. You can also do some amazing sport fishing in the area. If you want the amazing peace of this natural site, check out some of the Glamping camps available.

Isla del Espiritu Santo is not the only place to convene with nature. La Paz offers opportunities to see gray whales up close, swim with whale sharks, and dive with sea lions. Short drives from the heart of La Paz, one can find nine beautiful beaches on the Sea of Cortez. Balandra, a white sand beach, boasts the famous “El Hongo” rock formation. This beach is a quiet inlet for contemplation and relaxation. Pichilingue is a great place to wakeboard or enjoy chocolate clams. For family fun and a view of Isla del Espiritu Santo, explore El Tecolote. It is the furthest beach from La Paz and a great place for watersports and seafood dining. If you want to hang with the locals, look no further than the first beach from La Paz, El Coromuel. Here you will enjoy the day with other families relaxing under their umbrellas and simply enjoying a day at the beach.

The golf enthusiast can find two beautiful courses both with amazing views of the sea. The Puerta Cortés Golf Club is the only Gary Player Signature course in all of Mexico. This high-end course has its own cigar bar and is located east of the city in the growing tourist corridor. A short 10-minute boat ride from La Paz will bring you to the Paraiso del Mar golf course built within a 1700-acre natural preserve. Enjoy the natural beauty of this area alongside luxury amenities.

Like the rest of the southern peninsula, La Paz does not receive much rain. Because of where it is located, it is also not affected by hurricanes as frequently as other areas in BCS. It does, however, get pretty hot June through September as it does not receive the cooling Pacific breezes other cities do.

Cost of Living in La Paz 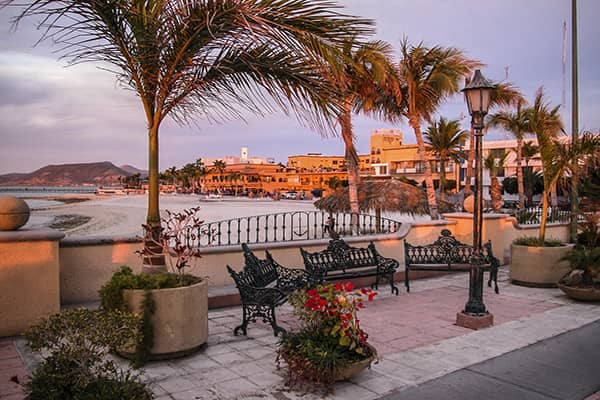 If you rent or buy in the tourist corridor, just east of the Malecón toward the numerous beaches, you will find high-end luxury and pricing. If you decide to live with the locals in the second ring of La Paz just off the Malecón and further south, expect to find more affordable rentals.

You will find the overall cost of living in La Paz lower compared to Cabo San Lucas. Both are very affordable by U.S. standards, but if you are looking for a budget place to live and still have access to pristine beaches, check out La Paz.