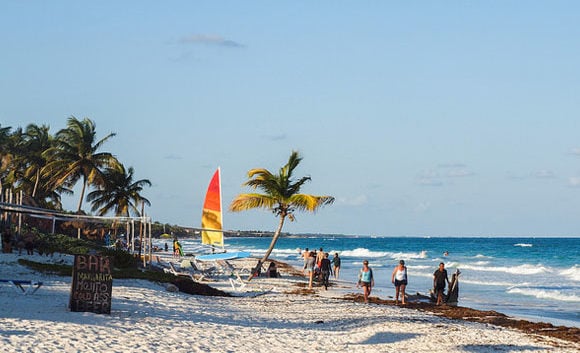 Property: You will find lots of affordable real estate in Mexico. And it’s perfectly legal for foreigners to buy here. This is even true for property in Mexico’s “restricted zone”—land that is within 100 kilometers (about 62 miles) of a border and 50 kilometers (about 31 miles) of a coast—which at one time was only available to the natives.

Renting: Rental properties are readily available throughout Mexico, and can cost anywhere between $450 to $1,000 a month.

Healthcare: Healthcare in Mexico is first-rate. Private clinics and hospitals are staffed by expert physicians (many of whom trained in the U.S., Europe, or in Mexico’s own world-renowned teaching hospitals), and medical care and prescription drugs will cost you only a fraction of what you would pay in the U.S.

Climate: Due to its size, there is no one set climate in Mexico. It instead varies from tropical to desert.

Financial Information: Major hotels and restaurants accept credit cards. You will need to have cash if you eat at small, homey restaurants. Local street artisans accept only cash so if you plan to shop, come prepared! Note that most small shop owners cannot change large bills so make sure you have plenty of pesos in small denominations.

Language: Spanish is spoken throughout the vast majority of Mexico, with 92.7% of the population saying it is their only language. Another 5.7% of people are reported to speak Spanish and indigenous languages, while 0.8% speak indigenous languages only , and another 0.8% are unspecified.

System of Government: Federal republic. The government is split into three branches: the Executive branch consists of the President and his Cabinet; the Legislative branch consists of a 128-seat Camara de Senadores (Senate) and a 500-seat Camara de Diputados (Chamber of Deputies); and the Judicial branch is made of numerous courts of different levels and specialties.

Religion: Roman Catholic is the predominant faith throughout Mexico, accounting for 82.7% of the population. Other notable religions are the Pentecostal faith at 1.6%, Jehovah’s Witnesses at 1.4%, and other Evangelical Churches accounting for 5%. Other religions take up 1.9% of the population, while 4.7% of people do not follow a religion, leaving 2.7% of people unspecified.

Clothing: Temperatures are warm during the day. Casual attire is fine, although it should be noted that Mexican men and women hardly ever wear shorts…and certainly never while doing business. Evening temperatures here are delightful, and it is doubtful that sweaters or jackets will be necessary. But if you chill easily (from ocean breezes or air-conditioned rooms), you may want to pack a light sweater or long-sleeved shirt. In the evenings you may want something a bit dressier…slacks or jeans and collared shirts (no ties, please!) for men, nice slacks or skirts for women. Don’t forget bathing suits for the beaches, pools, etc. And don’t forget your hats and sunscreen.

Food and Water: Hotels provide bottled drinking water in the rooms. Please ask for more if you need it. We love the food in Mexico…an abundance of fruits, exquisite fresh juices (try them all!), fresh vegetables and excellent seafood. Most of the hotels and restaurants here are very careful to serve food that has been specially washed and prepared with health concerns in mind. It is very doubtful that you will get sick, but please don’t take a chance and do not drink the water from the tap. (Also brush your teeth with bottled water.)

Tipping: In Mexico, it is not customary to tip taxi drivers, unless they have gone out of their way to accommodate you. In restaurants, the customary tip is 15% on the before-tax total. It is customary to tip a bellman 10 pesos per bag. It is also customary to leave 10-20 pesos on the pillow for the maid who cleans your room each day. You can chose to tip her at the end of your stay, if you prefer.

Mexico takes its cultural heritage—and tourism—pretty seriously. Thus, its Pueblos Magicos program, which designates 111 towns in the country as special and worthy of preservation and promotion to international and national visitors. It could be a natural wonder, grand colonial architecture, archaeological site, or a unique cultural practice that gets a town put on the list. As they put it on the official website, it must be a place that “captures the collective imagination.”

For example, the jungle-covered hills surrounding Palenque in Chiapas state in the far south is the site of well-preserved and extensive Mayan ruins. San Miguel de Allende, in central Mexico, has a historic centro of well-preserved colonial structures, narrow cobble-stone streets, and well-maintained parks and plazas, as well as the famous red and pink stone Gothic style church tower. Bacalar, in the Yucatan peninsula, has a freshwater lake, 26 miles long by a mile wide, that is has crystal clear waters that are said to be in seven shades of blue. Can you guess why the town of Tequila, in Jalisco state in western Mexico, was named to the list?