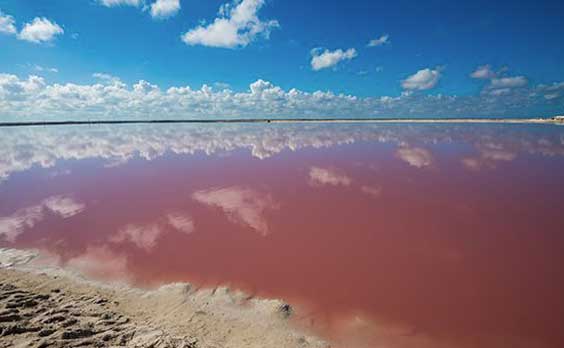 The Yucatan Peninsula, the figurative thumb of Mexico, is bordered by the Gulf of Mexico to the north and west, as well as the Caribbean Sea to the east. Steeped in rich colonial and Maya culture, with loads of archeological ruins, historical colonial cities like Merida and Valladolid, and thousands of underground freshwater springs (called cenotes), the Yucatan Peninsula is a special place, indeed. But wait; there’s more.

Just offshore of the tiny fishing village of Rio Lagartos (River of Alligators) on the windy north coast of the state of Yucatan lies a resource-rich area of mangroves and shallow backwaters. Serving as a nursery for juvenile fish, this unique spot also hosts an abundance of crocodiles below the waterline and shocking-pink flocks of flamingos above it.

Indeed, this part of Mexico is home to the largest concentration of flamingos in the country, swelling to populations of 40,000 at the peak. The area surrounding Rio Lagartos has been designated as a UNESCO Biosphere Reserve, which means it is of “unusual scientific and natural interest.” This gateway to the biosphere is a bird watcher’s paradise, with dozens of species making their home here.

Driving into Rio Lagartos, you will often encounter young men, standing in or alongside the roadway, who will encourage you to stop and talk to them. They are each pitching boat tours to view the flamingos located about 40 minutes through the mangroves. They will hand you an informational flyer and the more entrepreneurial among them will personally guide you to the harbor and ensure you get aboard the correct boat that he represents.

There are scores of small guide boats. Some are operated by certified guides wearing special shirts with identifying patches. Others are local fishermen whose families (for many generations) have grown up in this area and are well-qualified to provide tours. Providing these tours is an important part of the local economy as these individual operators rely on them for income. Very few, however, will speak even minimal English.

While the flamingos are a big draw for the small tour boats, of nearly equal interest are the bright pink waters of nearby Las Coloradas, another tiny town just a few miles away. Tour boats will usually ask if you want to see them. Here, shallow man-made salt ponds, shimmering in bright shades of pink, are used for the commercial production of sea salt.  Salt production in this region dates back more than 1,000 years as the Mayas used it for flavoring as well as food preservation and it was a valuable trading commodity.

Large commercial production of salt from this region has resulted in large rectangular portions of flat land, near the shore. Sea water is now flooded onto these flat, shallow tables (only about a foot deep) and left to evaporate, leaving behind pink sea salt.

The public no longer has access to these commercial ponds but the guides from Rio Lagartos can take you to several natural areas where smaller versions of these ponds still exist. But beware—the extreme salt content of these ponds can sting your skin, especially if you have any wounds.

The pink color comes from algae growth as well as the presence of tiny, bright-pink brine shrimp that thrive in this super-saline environment. It is the ingestion of these tiny, pink shrimp by the flamingos that give the birds their pink coloration.

The appeal of Rio Lagartos does not come from the village, proper, but rather from the access it provides to the biosphere. The town has a malecon that runs along the small boat harbor. Lined with numbers of restaurants, all offering the freshest of seafood, it is a great place for lunch. On several occasions, I have seen fishermen with a wheeled cart full of fish, come into a restaurant and sell those fish fresh off the boat. In only a few minutes, a fresh catch could be served to you in any number of ways. Ceviche and seafood cocktails are a couple of my favorites but it’s tough to find any seafood meal that is bad in Rio Lagartos.

While you are in Rio Lagartos, be sure your camera has fresh batteries and make the short drive to another coastal gem, San Felipe. Beware, though, as Mexico has many small towns named San Felipe. This small town is unique among Mexican small towns in that the houses are made primarily of wood…hardwood like cedar. Most are small cottage-like structures painted in the brightest of colors. Some can be rented for vacationers.

For my money, San Felipe is among the most photogenic of all Mexican towns. The colors, both bright and faded, create an amazing pallet and the simple architecture of these small cottages with old boats propped up in the yard and nets drying in the sun, easily transport one to a different life. It was in San Felipe where I first tried corn ice cream. Yummy!

Getting to Rio Lagartos is easy enough. It is a three-hour drive from Cancun and about two hours from the colonial city of Valladolid. There is a bus that runs from Cancun but with the numerous stops and delays, a three-hour trip turns into nine hours.

Rio Lagartos does offer a number of modest hotels and fishing charters for those wishing to spend a night or three in the area.

Get Your Free Mexico Report