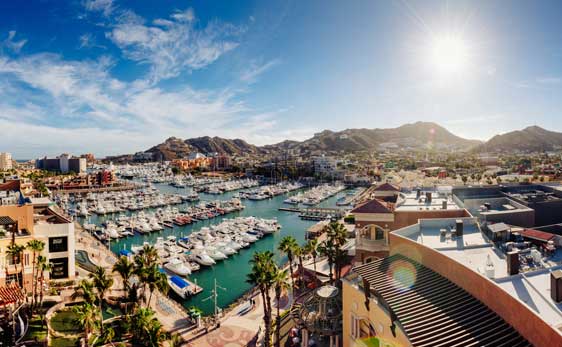 If you ask anyone about Cabo San Lucas, they will probably know about Sammy Hagar’s Cabo Wabo, Jenifer Aniston and George Clooney’s frequent visits, and Mango Deck’s crazy spring breakers. But for me, Cabo is a small town where the locals have three, not six, degrees of separation. Cabo San Lucas is a city of diversity and dichotomies. It is a place to get away from it all—while being in the midst of it all.

Situated at the tip of the Baja California peninsula, Cabo San Lucas is snuggled between the Pacific Ocean and the Sea of Cortez. Originally a sleepy Mexican fishing village, Cabo has exploded into one of the premier vacation and retirement cities in Mexico. Over the last 40 years, this desert community has grown exponentially becoming the second largest city of the state of Baja California Sur with a surging population of 350,000, and yet it is still rural enough that I often see cows wandering the road outside my home.

Until the late 1970s, Cabo San Lucas, the Cape of Saint Luke, was occupied by only a handful of Mexican families. Today, due to the work opportunities, half of the Cabo San Lucas Mexican population have immigrated from states throughout Mexico. With them, they have brought their food and music resulting in a melting pot of Mexican culture. Foods range from traditional Guadalajaran tortas ahogadas, Michoacano carnitas, and Sinaloan aguachiles. On a single night, the guitar and trumpet sounds of western states mariachi mix with accordion-heavy conjunto norteño music from the northern states, and southern bandas recognized for the prevalence of the tuba.

Not only is the city a mix of Mexican cultures, but it is also a mix of Canadians and those from the U.S. happily spending the winter months or the full year in Cabo. Added to this is a variety of tourists who seem to double the city’s population from November through March. In my neighborhood, we have also had families from the Netherlands and Russia.

Cabo San Lucas is a bustling city and a quaint Mexican village with historic town squares. It is a non-stop Spring Break party and a rustic quiet mountain rancho. Cabo cannot be described in one single way, which is one of the ways the city is so magical.

Sun, sand, mountains, and ocean. Cabo has it all. The busy winter months are a perfect 74 F with just enough clouds to allow for amazing sunsets. The summers warm up to the mid-80s for the ideal beach day. August and September temperatures reach mid to upper 90s and bring the much-needed rain that does not fall the rest of the year. Many expats find these months a little overbearing and use the time to travel back north to visit family.

The marina is the heart of the city. Completed in 1978, there are actually three marina developments within this man-made harbor. On one side of the harbor is Playa Grande or the locals’ beach that leads to the famous Lands’ End rock formation and the Pacific Ocean. On the other side, is Médano Beach lined with restaurants and tourist activities. The boardwalk edging the inside of the marina includes a variety of hotels, restaurants, a movie theatre, and shopping malls. The marina and the blocks surrounding are referred to as El Centro and bustle with restaurants and artisan shops including a hand-blown glass factory with daily demonstrations.

As the city grew, so did the retail available. We now boast a Super Walmart, Home Depot, and Costco making many American products available. The Mexican superstore La Comer offers less expensive domestic products, handmade tortillas, fresh ceviche, and authentic baked goods. A handful of organic markets occur weekly in the expat communities, and one can also find seasonal fruit and vegetables frequently sold out of trucks on street corners.

Average travel times point-to-point in Cabo are usually under 20 minutes, or a little longer during the 3 p.m. lunch and 6 p.m. after-work traffic. The city now sprawls from the new developments on the Pacific coast, down to the Beverly Hills of Cabo, Pedregal (“rocky”) toward Lands’ End. On the Sea of Cortez side, the community of Cabo Bello supplies ocean-front single-family homes, and further inland the exploding El Tezal area boasts homes built 50 years ago amongst a host of brand-new condominium developments. The common style of home in Cabo is multi-level which can be challenging for many retirees. However, many of the newer developments are single level and have elevators to each floor.

Inland from the coasts lies the heart of the working city. Although a spattering of expats can be found, the neighborhoods of Lomas del Faro, Brisas del Pacifico, Los Cangrejos, and Chula Vista are heavily populated with the local working-class due to the extensive bus service.

Healthcare has greatly improved in the area with the recent addition of the world-class H+ Hospital located an easy 30-minute drive from Cabo San Lucas. Closer to the city, the reputable AMC American Medical Center and Blue Net hospitals offer affordable and reliable emergency care. Locally purchased health insurance offers annual rates for the same amount most Americans pay monthly. An average doctor visit is about $60 and includes unlimited text follow-up directly with the doctor.

With its pristine beaches and its active nightlife, Cabo San Lucas is a desired destination for spring break, winter snowbirds, and bachelor/bachelorette outings. Fun in the sun can be found on jet skis, parasailing, snorkeling, and dinner cruises. December through March is the ideal time to view migrating humpback and gray whales. A host of other marine life can also be viewed almost daily including manta rays, sea turtles, osprey, blue-footed boobies, and sea lions including the famous “Pancho.”

With an abundance of tuna, wahoo, marlin, and dorado, Cabo San Lucas was founded on fishing. Today, Cabo is one of the premier fishing tournament cities in the world hosting the famous multimillion-dollar Bisbee marlin tournament, the Los Cabos Tuna Jackpot, and many other fishing competitions. The marina is filled with private fishing vessels from tiny pangas to 200-foot yachts, both privately-owned and available for rent.

Away from the water, adventure can be had on vacation activities like ziplines and camel or horseback rides. From Jack Nicholas golf resorts to city clubs, Cabo San Lucas offers challenging and breathtaking courses for every type of player. Throughout the Baja peninsula, off-road racing can be found including the Score International Off-Road Racing association Baja 500. Although the larger races do not make it to Cabo, the experience does as race-quality off-road vehicles can be rented for full- or half-day excursions.

After a busy day, many restaurants offer a quiet view of the sunset over the ocean including the local Baja Brewing with incredible views of the bay and arch. As the rich and famous often visit Cabo San Lucas, Michelin-starred restaurants are easy to find including Enrique Olvera’s Manta at The Cape and Nobu Matsuhisa’s sushi at his namesake hotel. Or you can while away quiet hours with other locals at Tiki Bar, an expat favorite for friendly service, great food, and a lovely view of the marina.

For many, the Cabo nightlife is not to be missed. One street in El Centro is lined with a string of dance clubs which are often open until 4 a.m. Stroll club to club and dance the night away. Or, if the late-night scene is not for you, driving through the gauntlet of clubs as they begin to open can be a feast for the eyes and the ears.

If you want a break from the bustle of Cabo, many destinations are within an easy hour’s drive. Head up the 19 highway with spectacular Pacific Ocean and mountain views to reach the city of Todos Santos which is a fun blending of traditional Mexican architecture with splashes of hippy expat culture. Near Todos Santos is the beach town of Pescadero known for its surfing. Or you can head up the 1 which hugs the Sea of Cortez. Stop at Santa Maria or Chileno bay for sun, sand, and snorkeling, or keep driving to reach San José which is a more laidback city than Cabo, and be sure not to miss the famous weekly art walk while you are there.

Although it has a reputation as one of the most expensive cities in Mexico, Mexico still offers a significantly reduced cost of living when compared to the U.S. Since Cabo is located at the tip of a peninsula, almost like living on an island, delivery of goods like furniture can be more costly. The other reason for the slightly higher cost of living is the influx of foreigners who desire high-end restaurants and luxuries. However, for most expats, the cost of living is still much more affordable than they found back in the U.S.

In 2018, My husband and I purchased a modest three-bedroom, two-and-a-half bathroom duplex in Tezal with a view of the ocean for under $200,000. The gated development boasts three pools and a basketball court for the low homeowners’ fee of $113 (2250 pesos) a month. Our annual taxes are under $200 and if we pay in January, we receive 20% off. We found purchasing more economical than renting. It is important to note that mortgages are not available in Mexico although there is some development or seller financing available.

For the two of us, we live for about $1,000 a month including twice a month housekeeping and monthly landscaping. If you live like a local, it is possible to live less expensive than that. Or if you prefer a more luxurious life, multi-million-dollar homes are available along the coastlines. For most Americans renting a three-bedroom home in a gated community, it is easy to live for under $3,000 a month.

Here is a breakdown of a monthly budget for a couple living in Cabo San Lucas: