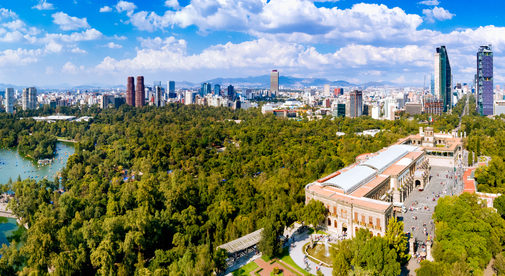 Mexico City isn’t the most popular expat or vacation destination in the country, but it still has plenty to offer. Whether you’re just passing through on your way to the beach or settling down for a couple of years, this guide to the top 10 things to do in Mexico City will help you plan an action-packed adventure through the capital.

Izta-Popo National Park is about 55 miles from Mexico City and is home to the country’s second and third tallest mountains. Iztaccíhuatl is a dormant volcano but her neighbor Popocatépetl is still active. To see them, enter the park at Paso de Cortes, where a short hike will bring Popo and her puffing smoke into view. Trek a bit further and you’ll get a stunning view of Izta as well, who looks like a woman reclining on her back from afar. Adventurous travelers can also camp in the park and climb all the way to Izta’s summit at 17,160 feet.

Did you know Tex-Mex and Mexican food are two different cuisines? If you’ve chowed down on burritos and nachos outside of the country, you may be surprised to find that the food in Mexico isn’t quite the same. While in Mexico City, make sure to eat like a local and try tamales, chilaquiles (breakfast nachos), pozole (hominy soup), elote (grilled corn), and more, all of which are guaranteed to leave your mouth watering from the memories for years to come.

The fantastic flavors of Mexico don’t stop with the food—the city also has multiple breweries putting their own spin on craft beer. In the popular Roma and Condesa neighborhoods, you can visit Graciela, Escollo, and The Tasting Room breweries on foot because they’re all within walking distance of each other. For a lighter drink on your night out, try some Mexican cocktails like the Michelada, a spicy beer cocktail, or the Curado de Pulque, made from the fermented sap of agave plants that’s known as “the Aztec drink of the gods”.

Show locations and times vary but you can typically catch a Luca Libre match at Arena Mexico every Friday evening. Grab a ticket at the door and then settle in to watch the colorfully masked luchadores (wrestlers) battle it out on stage where the moves may be fake but the fun is very real. Join the crowd in cheering on your favorites and you just may become a lifelong fan—this is the second most popular sport in Mexico after all.

6. Visit Chapultepec Park and the National Museum of Anthropology

The National Museum of Anthropology is Mexico’s most visited museum and conveniently sits inside another one of the country’s top attractions: Chapultepec Park. The massive city park sprawls across 1,700 acres and encompasses a theme park, zoo, lakes, trails, galleries, and even a castle with stunning views over the greenery and the city skyline from above.

Roma and Condesa are two of the most desirable neighborhoods to stay in for tourists and expats alike. They’re home to some of the city’s trendiest shops and restaurants along with plenty of beautiful galleries, museums, and libraries to while away your time inside. However, the Coyoacán neighborhood is also worth a visit. Although it’s situated a bit off the beaten path (about 6 miles from Roma and Condesa) the colorful architecture and quaint central squares offer their own unique charm to travelers who make the time to pass through.

Did you know that Zócalo, the historic square in downtown Mexico City, was used as the ceremonial center of the ancient Aztec city of Tenochtitlan? It still exists today, and a stroll around the large open space will take you past the Metropolitan Cathedral, the National Palace, and more of the city’s most essential cultural sites. Afterward, catch the latest show, ballet, or exhibition at the nearby Palacio de Bellas Artes and, if you can, make time to stop at La Casa Azul. The blue house that Frida Khalo called home in the Coyoacán neighborhood is now a museum dedicated to her life and art.

9. Visit the City’s Most Iconic Churches

While many churches might catch your eye while wandering through Mexico City, the two most iconic are the Mexico City Metropolitan Cathedral and the Basilica de Guadalupe. The Basilica de Guadalupe is located at Tepeyac Hill where an apparition of the Virgin Mary is believed to have appeared to Saint Juan Diego. She directed him to gather roses in his cloak, which was then miraculously adorned with the now-famous image of Our Lady of Guadalupe. The church still contains the 500-year-old cloak and has become one of the most-visited Catholic sites in the world today.

10. Explore the Ruins of Teotihuacan

The Teotihuacan ruins are only 25 miles from Mexico City but will take you back in time almost 2,000 years. The sprawling city was inscribed as a UNESCO World Heritage Site in 1987 and offers visitors some of the most impressive views from the Pyramid of the Moon, the Pyramid of the Sun, and the foreboding “Avenue of the Dead” that runs through the ancient complex.