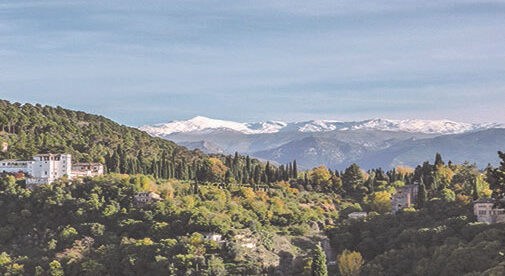 Even the most rural areas of Spain are well-served for hospitals, health centers, and quality care. ©Nazareen Heazle.

No one likes to be in the hospital, yet whenever my husband, Clyde, thinks about the time he was hospitalized in Spain, he smiles.

Spoiler Alert: He liked the spongebaths.

We’d been house- and petsitting in the rural countryside of Spain. It wasn’t a tough gig. Surrounded by nothing more than a desert-like vista of dirt, shrubs and rocks, we were all alone except for the animals. On the day in question, the dogs were lying about outside while the resident cat showed up only for food. As the saying goes: cats don’t have owners; they have staff.

I was tidying up in the master bedroom when I heard Clyde moan loudly from the dining room. Expecting to find nothing wrong, I went to peek into the room down the hallway where he was sitting at his computer. Instead, he was leaning over to one side, with his arm hanging down to the floor, almost ready to fall out of the chair. But as soon as I entered the room he came to and seemed to be back to normal.

This all began four months prior when we were traveling through Wales.

One sunny day we were out exploring the Welsh countryside and stopped to visit at a castle. As Clyde was climbing back into our tiny rental car he moaned slightly, complaining that he felt weird. He complained of feeling lightheaded, like he was going to pass out, but within seconds felt fine again. Those symptoms returned several times that day but always went away quickly, returning him to his normal, upbeat, demeanor.

Spoiler Alert: He liked the spongebaths.

I began to worry, first about his health, but also about not being able to drive him to a hospital if it became necessary. Here we were in the United Kingdom where driving was done on the left side of the road, opposite of what we Americans are used to. Not to mention that cars here typically have manual transmissions, something I had not had to deal with for the past 20 years. It’s the kind of concern that seems minor until the situation arises. At that point, it becomes a real worry.

Back at our lovely little guest house, we were chatting with the owner that night, telling her about his strange symptoms. Immediately, she offered to call her doctor to see if they could see him the next day. She was able to make an appointment for Clyde, for which we were grateful. The next morning, he was seen by a doctor who found nothing wrong, and left it as, “something to keep an eye on.” He remained symptom-free for the next four months, until that day in Spain.

When his symptoms returned that day, I insisted that we find a hospital and take him to the emergency room. Although we were in the countryside, our housesit home was just a 45-minute drive from the coastal city of Alicante. I knew there must be good hospitals nearby, so I quickly did some research. I found a private hospital in the smaller town of Elche, just a 30-minute drive from our home.

Luckily, when we picked up our first rental car in Spain, the key fob was faulty, and the car needed to be switched out for a replacement. We were given a brand-new vehicle, and for the first time, it featured an automatic transmission. I insisted on driving Clyde to the hospital.

Clyde was feeling fine and could help me navigate my way. Immediately upon arrival at the emergency room we were approached by a female doctor. Right there in the lobby they discussed his symptoms. The doctor suggested that he be kept overnight in an intensive care unit so his heart could be monitored for 24 hours. The thought of him being in ICU alarmed me, but they assured us that it was standard procedure to ensure that the nursing staff could monitor him round-the-clock.

I asked the doctor if I could stay with him but since he would be in ICU, no family members could stay with the patient. In fact, I was only permitted to visit him for a few hours, several times a day. I remember telling her that I would sleep in the lobby, because there was no way I was leaving him, not knowing what was going to happen.

A few minutes later the doctor returned and handed me a small piece of paper. “We have a room for you,” she said, “and this is the number.” To my surprise, I was given a room in a vacant wing of the hospital, apparently for the use of family members in this sort of situation.

Before his night in the ICU, though, the doctors needed to get some idea of what condition Clyde was in. A nurse walked him to a triage unit of eight beds, all separated with blue curtains, and had him lie down. I realized that I’d left something in the car and, since he was back to his normal self, I left him to run outside for a minute.

The triage room was empty of other patients and while I was gone, Clyde felt faint again. He yelled in Spanish for someone to help, and when no one came he climbed out of bed and went looking for a nurse. One heard his plea and came running. She quickly helped him back into bed and hooked him up to heart monitors. We later found out that his heart rate had dropped to a low of just 15 beats per minute. (Typically, a normal heart beats at 60-80 bpm.)

Soon after the episode, the doctor arrived and began discussing Clyde’s symptoms, raising the point that he would need to have a pacemaker inserted. Heart surgery. This was serious.

Not to put too fine a point on it, we were both terrified. Here we were, alone in a foreign country, and, while it wasn’t the most major concern in our lives right now, there was still the fact that we were in the middle of a house-sit with responsibilities to care for someone’s beloved pets.

Thankfully, I was able to contact some friends of the homeowners to alert them to the situation. Since the animals all lived outside, their friends were able to run over to the house to ensure that the animals had food and water. I emailed the homeowners who were very understanding and concerned for Clyde.

It was after dark when I went looking for my room down a dimly lit hallway, but once inside, the room was lovely—bright and airy with bedside tables, a dresser for clothes, a flatscreen TV, and even a small refrigerator. The bathroom had granite counter tops and a glassed-in shower. It resembled a 4-star hotel except that it had hospital bed.

The next week was a blur of waiting for the hospital to source a suitable pacemaker unit and schedule a specialist who could do the insertion procedure. Although I was close by in the same hospital, in between visiting hours our means of communication was texting each other on our phones.

Like a 4-star hotel except that it had a hospital bed.

One of the nurses spoke English and became a valuable source of information to us both. She assured us that even with a pacemaker, Clyde’s life would go on as usual. After a few weeks of recovery, we could continue our travels and adventures around the world, and that Clyde would be as good as new.

After a few days in ICU it was time for Clyde to have the procedure done. I cried as I kissed him goodbye, on his way to the operating room, still unsure of the outcome. Our favorite nurse was right by his side. She grabbed my arm and said, “Don’t worry, I will not let anything happen to him.”

An hour later, a male doctor approached me to say that everything had gone well, and that Clyde was in the recovery room. He spent a few more days in ICU being watched carefully. Whenever I visited him, he smiled and told stories of how well he was being treated by the Spanish nurses.

“Two nurses. Not one, but two nurses at the same time gave me sponge baths,” he said with a big smile. And that is what Clyde remembers about his time in the hospital in Spain. Attentive nurses and sponge baths.

As for the cost of this experience, it was covered by our travel insurance. We had to pay the deductible of $3,100 and the insurance company covered the rest at 100%. Clyde spent four days in ICU, two days in a private room, and they even paid for my private room where I stayed while he was in ICU.

Obviously, nobody wants to get sick anywhere, but if it has to happen, there’s no need to be scared of going to hospital in Spain. Our crash course on the subject was enough to give us both confidence in the system and the care.

I dare say there are easier ways to get a spongebath, though.

A Look at Spanish Healthcare