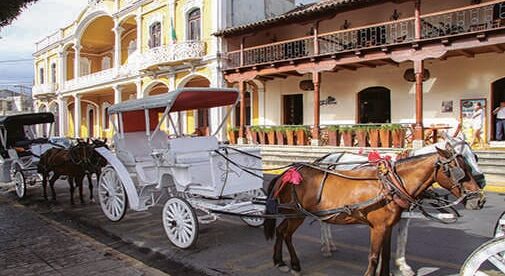 With the right property in a colonial city, you can truly describe your home as “palatial.” © Eoin Bassett

It’s these flourishes that have long attracted people to Latin America’s colonial towns and cities. Often, discerning expats live in restored historic homes. Think interior courtyards, often with vaulted wood-beam ceilings, vivid tilework, and other decorative touches. In other cases, a colonial building maintains its original façade, but the interior is completely modern, sometimes split into several homes or apartments.

These “inner city” historic districts were once neglected, as local people with means decamped to modern suburbs. But many expats prefer historic centers and have led revitalization efforts alongside well-heeled locals.

And although you are surrounded by history, you now have modern conveniences like high-speed internet, not to mention other centuries-old structures nearby that have been repurposed into little shops, restaurants, cafés, art galleries, and boutique hotels.

A sizeable, busy city of a half-million, Cuenca is one of Ecuador’s, if not Latin America’s, top expat hot spots—especially for North American retirees. The outskirts and suburbs are modern. But at its heart, Cuenca is a classic colonial city, with a UNESCO World Heritage designated center boasting many picturesque 16th and 17th-century buildings.

Expats are attracted by the quality of life: the temperate climate, the low costs on everything from food to medical care, the active arts scene, and the low-stress existence in a picturesque setting with views of the Andes Mountains. As a bonus, the country’s currency is the U.S. dollar.

The expat community is very active, but the vibrant local culture still very much shines through.

A renovated 125-year-old colonial home in central Cuenca, with two bedrooms, is listed at $139,000. You have the original hardwood and fieldstone floors, wood beams, and, of course, thick adobe walls—but a new kitchen. The 258-square-foot rooftop terrace offers views of the famous blue domes of Cuenca’s cathedral.

Set on Lake Nicaragua, the world’s 19th-largest, Granada was an important trading port in colonial times thanks to the lake’s connection to the Caribbean via the San Juan River. That also made this wealthy city a target. Pirate Henry Morgan sacked Granada in 1665 and made off with a fortune in silver that has never been recovered.

There is another type of treasure to be had in the town these days. Consider the renovated colonial buildings with decorated façades, intricate floor tile work, and interior courtyards. You can find these homes, with interior gardens, fountains, and pools, throughout the historic district. The warm weather here means that, often, kitchens and living areas are open-air; natural extensions of the courtyards. It’s the best of indoor/outdoor living.

These days, many have been refashioned into restaurants, cafés, shops, and private homes. Granada’s historic center radiates out from the central park. La Calzada, a pedestrian avenue that is the “main drag,” is in the midst of a decades-long revitalization effort spearheaded by expats and locals.

A recently remodeled three-bedroom home six blocks from the park is listed for $95,000. (Political instability has created great value in Nicaragua.) The second-floor balcony has views of terracotta barrel tile rooftops, the lake, and the Mombacho volcano. There is a small pool, too.

Set in a narrow valley, the heart of Guanajuato’s colonial center is at its lowest point, with hills rising steeply all around, and row upon row of brightly colored homes rising to the top. In the picturesque plazas of the centro, you’ll find strolling mariachis serenading families out for dinner at sidewalk restaurants. Guanajuato also has a world-class symphony orchestra. The Cervantino, a three-day celebration of arts and culture named for Spanish writer Cervantes (author of the famous novel Don Quixote de la Mancha) takes place every fall in venues across the city. It’s the best of the modern and traditional.

One thing that makes the lifestyle in this mountainous and high-elevation area of Mexico so appealing is the ideal temperatures much of the year—no air conditioning needed. Nearly year-round, temperatures are in the 70s F during the day, cooling off into the 60s and 50s at night.

Just five minutes’ walk from the main market, Mercado Hidalgo, and on a hillside overlooking centro, is a home that has been renovated into four apartments, with a total of six bedrooms. You could live in one and rent the others out to local expats, snowbirds, or travelers. The rooftop terrace offers panoramic views.

Edgar says: What type of loan do you get when trying to finance overseas homes? Or are you limited to cash only?

Ronan Responds: Hi Edgar, your options depend on the type of deal you’re interested in and where it is. For instance, in Europe I’d suggest bank financing, as right now even non-residents can borrow at incredibly low rates—sub 1% in some cases.

For the special off-market deals I bring to members of my Real Estate Trend Alert, I negotiate exclusive developer financing. This is very beneficial in Latin America, where getting bank financing is very difficult for foreigners.

As the name suggests, developer financing is where a developer finances a piece of the real estate you buy from him—he’s the bank. Often the developer will offer interest rates far below what other foreign buyers or even locals will pay on a mortgage. And RETA members are usually pre-approved, making it a very straightforward option.

Maria asks: Are there any special considerations or rules for foreigners buying real estate in Mexico?

Ronan responds: Hi Maria. The main restriction on foreigners is that you cannot hold property that lies within 50 kilometers (31 miles) of the high tide line, or within 100 kilometers (62 miles) of Mexico’s international borders, directly in your own name.

However, there are ways around this.

In 1973, the Mexican government established the “fideicomiso,” or bank trust, as a legal way for foreigners to acquire land for residential purposes in these zones.

The fideicomiso basically grants the title to a bank. You, as the buyer, can choose which bank you want to use from a list of banks approved by the Mexican government to act as trustees. Although the bank is the trustee of the property, it can only act on the instructions of the beneficiary of the fideicomiso. The beneficiary is the foreign owner. In this case, you.

As the beneficiary, you retain full control of the property. You can live in it, sell it, make improvements to it, mortgage it, pass it to your heirs, or rent it out. You can build on it if it’s a piece of land. You get to treat the property as if you owned it fee simple.

The bank cannot treat the trust-held property as an asset of the bank. And the beneficiary is responsible for paying property taxes and any costs incurred for maintenance, etc.

Fideicomisos normally run for 50 years. Then, once it runs out, you can renew it for an additional 50 years.

You are also restricted from owning ejido land. This is government land granted for use by members of local ejidals, something like Native American land in the U.S. and Canada. This land can be converted into private property, but the process is long and complicated and too much can go wrong. When doing your title research, I suggest you make sure the plot you’re interested in has never been ejidal land, or, if it was, that it was successfully privatized a long time ago and never challenged. You may be tempted by a low price or a promise that nothing will go wrong but ignore it—just don’t buy it.

The World’s Best Places to Retire in 2021

5 Places to Retire to With the World’s Best Climate