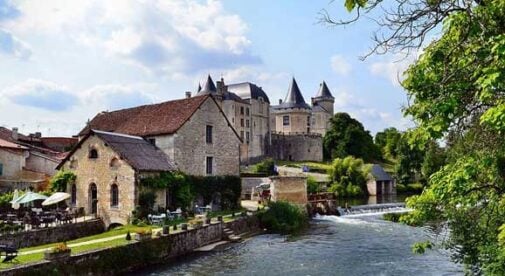 Before moving to France, our home was Boston, Massachusetts. I grew up in rural Pennsylvania, and while my wife is British, she had lived in the United States for over 30 years. Massachusetts was our home, and we had built a comfortable, cosmopolitan life there.

Like many Americans, we worked too much. I traveled a fair amount for my job in the corporate world, but I never really saw the places I traveled to because I was so focused on the business aspects of the trips. We took the typical one- or two-week vacations within the United States with an occasional trip to the United Kingdom or Europe.

Looking back, I think we always knew there was more to life than the rat race and the work-focused way of life. My wife had adopted the American lifestyle, but she always felt a pull to be in Europe. As we approached retirement age, we started thinking about how we could design a different type of life.

Our first step was to take a three-week vacation to France with a week in Paris, a week in Aix-en-Provence, and a week along the Normandy seaside. While we loved France, we weren’t ready for a full-time commitment so instead, we bought a small vacation house in the Normandy area (the same one we stayed in for this vacation!) and began spending months at a time in France. I dialed back my work commitments, and we began living between the two countries.

After several years of going back and forth between our French home and our life in the United States, we decided to make a bigger commitment to Europe and in 2009, we moved to France full time. This was a complete change as we sold our vacation home in Normandy and purchased a larger property in Verteuil sur Charente in southwest France.

Verteuil sur Charente is a quintessential French village nestled along the Charente River, about 2.5 hours by train from Paris. With less than 1,000 residents, it’s one of France’s hidden gems featuring a magnificent historic chateau set above the winding alleys of the town center. The village has a butcher, a baker, a handful of restaurants, and an active outdoor market on Sundays.

The property we bought was built in 1586 and as I had retired from the corporate world, the renovations of our new home became a full-time occupation for me. I poured my energy into this new project, and the pay was the satisfaction of restoring the property.  The first stage of work, which was on the main house, was done over a period of three years.  The next nine years were spent making improvements to the remainder of the property.  Along the way, a friend convinced me to go horseback riding with him.  I found it very enjoyable, one thing led to another, and I ended up with three horses of my own on our property!

In the past year, we decided our property was too big for two people and needed new caretakers.  A young entrepreneurial couple from Great Britain purchased our large home, and Barbara and I moved to a comfortable house in Nanteuil en Vallee, a nearby village for our next adventure.  I now consider myself retired so we plan to travel more and enjoy all that is on our doorstep in Europe.

We love where we live. We enjoy a mild climate, gorgeous countryside for walking and biking, a welcoming and friendly local population, and of course amazing French food and drink. The Charente region is a great place to retire.

Our slower pace of life has been the biggest positive change for me. It’s been wonderful to leave the rat race, and we’ve adapted to the French countryside pace of life where things move more slowly, we get to know our neighbors, and life is both smaller and larger at the same time.  We feel more connected.

Learning the language has been my biggest challenge and frustration. Despite my best efforts, I am not a good linguist, but luckily, I have a wife who has learned to speak French well. Barbara came with only limited high school French, but she applied herself and not only learned to speak French well but became so integrated into village life, that she was voted in to be part of the town council. I’m so proud of her! We’ve been accepted and have found creative ways to integrate. France has become home.

If I were advising someone from the U.S. who is considering a move to Europe, I’d say:

Our move to Europe has been a very rewarding experience, summed up when a friend of ours observed “You have stopped being a spectator and have joined the game!”  Yes, we have, and we love it.