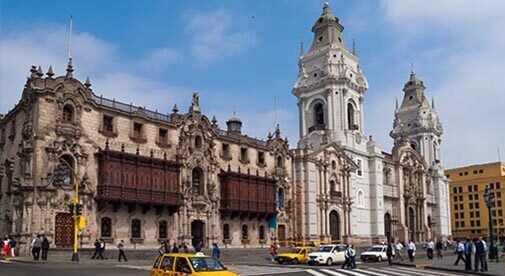 Walter’s taxi service has become the go-to for expats in Lima who need to get around. ©Holgs/iStock.

Visit any Peru online expat forum and you are bound to see Walter Clark’s name pop up repeatedly as the “go to” person for safe, reliable transport in Lima. Walter has found a successful business niche as one of the only, if not the only, English-speaking professional drivers in this vibrant seaside capital city of over 10 million people.

Originally from Massachusetts, Walter and his wife, Heyde, moved to Peru in 2015 with the idea of eventually starting their own business.

“When we first moved, we hadn’t quite figured out what we were going to do. The original plan was to do freight forwarding or to be a freight broker because I worked in the trucking industry for so long that I am very familiar with that,” explains Walter. “Then I decided that I don’t know enough Spanish to get involved with all that. I know a lot of Spanish, don’t get me wrong, it’s just all the technical terms that I don’t know yet.”

But in the end, it was a taxi service that took root in their lives. A year after Walter and Heyde moved to Peru, they started their business, Gringotaxis.com, with their car and a message posted on Facebook. It didn’t take long for the service to take off once word got out to the local expat community. People are willing to spend a little more for a reliable, English-speaking driver who comes with great recommendations.

As it happened, the process of getting registered was simpler than Walter expected. “If you have some kind of certificate, you can legalize it over here and continue doing what you’re doing in the English-speaking community. Even doctors come over here and get their medical certificates recognized by the government. There is a process, but you can do it. There’s a thing called the Hague Convention that the U.S. signed with Peru, so any documents that you get from the U.S. can be legalized here.”

Walter didn’t have to get any additional certification when he arrived in Peru. He was able to do a license exchange with the qualifications he already had and is now able to work doing commercial driving in Lima. “I have a legal business and insurance, partly because I drove a truck professionally in the U.S. for 23 years. It’s a little different driving a taxi, but it is still in a professional capacity.”

Walter still only owns one vehicle but now has three drivers with their own cars who he farms work out to. He also has two van drivers on standby that he can call when necessary.

“Originally my clientele started with all the expats. After a while, I ended up on TripAdvisor, and then a couple of really good clients recommended me to everybody and their brother, so it has grown from a bunch of expats to many tourists as well.

I run my entire business off my cellphone.

“I run almost my entire business off my cellphone. It’s pretty simple. People will send me a message via my website or Facebook page. I take their information and schedule it through Google Calendar. I run all the information back to Heyde, who handles the accounting side.”

The couple initially rented a three-bedroom apartment on the Malecón, a prime waterfront area of the city, for $1,000 a month. Nowadays, they live in Rímac, one of more affordable districts of the city. “Being over in Rímac, we can live on $1,000 a month or a little bit over. You can find a decent apartment for around $240 a month. Food is around $5 or $10 a day at the market. Electricity is $30 to $50 a month You could definitely live comfortably on $1,500 a month, including rent for an apartment.”

Getting the business up and running has kept Walter and Heyde busy for the past few months, and it looks set to grow in the future. “I’m not getting rich off it right now, but my new website is coming along. I make enough to build the website. I make enough to live on, maintain my vehicle, and live my life. But again, I started from zero. If I had started with a $30,000 or $40,000 investment, and done a bunch of advertising, it might be a different story. I started with just my car and a message posted on Facebook.

“But my website is getting built. Once it is working, I can bring in an extra 400 loads a month. That could bring in an extra $3,000 or $4,000 a month into my pocket. I’ve basically found a niche in the market for the English-speaking community. And once you get into the English speaking community there are people who prefer their safety and security over a cheap taxi ride like Uber.

“I love it here. If you can hold your ground and do things right, you can grow any business. And because I am in the expat community, if I were to do something bad, or any of my drivers were to rip off a customer or whatever, that’s going to get back to the expat community and I’m going to suffer the consequences. I’m not about to let that happen.”

Peru Itinerary: How to Spend 10 Days in Peru