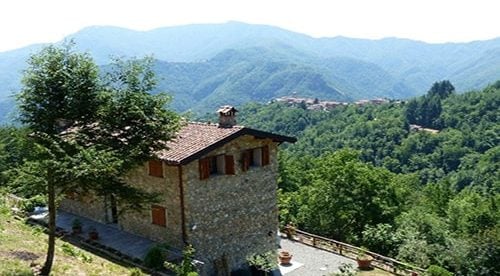 The charming mountain village of Vergemoli sits in an area of Italy known as the Garfagnana, a lush, historical region in the north-western stretches of Tuscany where the Apennine and Apuan Alps meet.

Just outside Vergemoli is a national park full of chestnut, hazelnut and oak trees where my husband and I bought what we called our “pile of rocks.” It was an old stone farmhouse, too far gone to save so we had to rebuild.

It’s not possible to build in a national park in Italy but you can renovate or rebuild an existing house on the conditions it’s constructed in exactly the same footprint as the old house, using the same materials, windows, and doors and is totally in-keeping with the original.

We secured permission to rebuild the three-story house in a slightly different position on the site to give us a wider terrace in front of the house. It’s made of stone reclaimed from the site and we also managed to save an arched doorway from the original house.

Our 107,640 square foot block is a series of terraces down a steep slope. There are no other houses around us and we have spectacular views of Vergemoli below and a few other villages nestled into the mountains nearby.

We have our own spring which supplies water to the house and garden. It slowed a bit last year when we had a drought, but this year the rain has been steady, which means we should have enough water to get us through the summer.

Midway through the build, the global financial crisis happened and we realized that selling the house might prove difficult, but we ploughed ahead and decided to rent it until the market improved.

Five years on, we love the house—which we call Casa Debbio—and are in no hurry to sell. For our own pleasure and to add value to the property, we started a garden. The entire property was covered in brambles, so the first job was to clear the terraces of the brambles and much of the acacia that was taking over from the native forest.

We now have several areas of garden over most of the terraces. We have around 350 lavender plants, 60 peonies, geraniums, daffodils, wisteria, and roses covering fences and pergolas as well as dozens of other gorgeous things growing in the garden.

We have fig, olive, walnut, apple, cherry, pear, pomegranate, and persimmon trees and a little vegetable garden with tomatoes, strawberries, raspberries, gooseberries, and herbs. Wildflowers pop up everywhere in spring.

The garden has been trial and error. We have wild goats, deer, wild boar, and porcupines that like to eat some of the things we plant. We had to completely give up on dahlias, azaleas, camellias, grapes, and potatoes because they just got eaten. Squirrels eat the hazelnuts and walnuts and birds get most of the cherries, but that’s okay, they have to eat too.

I love to get up in the morning and wander through the garden and take in the heavenly fragrances. My pockets are full of lavender flowers from my hours of pruning. No amount of washing takes it away and I often put hand in a pocket when I am back home and find a little bit of Casa Debbio with me.

In the afternoon our neighbor in the valley below plays tango music if the mood takes him. He has speakers under the eaves of his house and his music can be heard all through the valley and across to neighboring villages…only in Italy.

We love our mountain house. We now divide our time in Italy between our apartment in Bagni di Lucca and Casa Debbio. We rent the house in the summer when we go back home in an attempt to cover running costs. It was supposed to be an investment but the sale may never happen…and that is okay with us.

10 Things To Do In Italy…For That Uniquely Italian Experience

My 3 Favorite Towns In Northern Italy