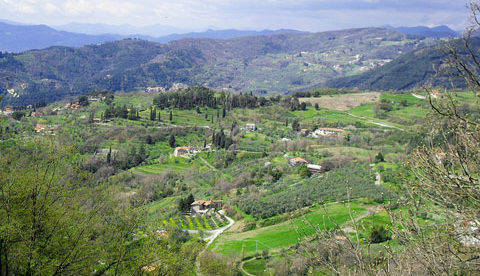 Italy is home to the Cittaslow movement which combines “Slow Food” with the art of leisurely good living. As delectable dining is one of the great joys of Italy, make time to discover at least one or two of the network’s 70 small towns.

Most Cittaslow communities come with historic treasures, but the big attraction is their strong sense of identity and spirit of place. To be accredited, they must have less than 50,000 inhabitants. With an emphasis on regional recipes, traditional agricultural practices and seasonal local produce, it’s an authentic taste of Italy guaranteed to make your tastebuds zing. Here are four inland and coastal gems to whet your appetite, the are some of the best places to eat in Italy. You’ll find more throughout Italy here.

Midway between Pisa and Florence, medieval San Miniato is a hill town that rightly belongs to the dreamy backdrop of a Renaissance painting. A stopping point on the via Francigena, the main pilgrim path from northern Europe to Rome, it’s a time capsule of the Middle Ages.

Overlooking the Arno river valley, it lies at the heart of truffle country—around 25% of Italy’s white truffles come from the San Miniato area’s woodlands. This sensuously aromatic tuber has been regarded as an aphrodisiac since the times of ancient Rome. Back then, it was believed truffles formed in the secret places of the earth when Jupiter’s thunder-bolts met lightning.

The tartufo bianco (white truffle) is the star turn of San Miniato’s culinary year. During the last three weekends of November, the town hosts La Sagra del Tartufo Bianco—a food festival and market dedicated to truffles and truffle-derived products. Depending on the summer’s weather conditions and the abundance or scarcity of the “crop,” prices can vary between €2,000 and €5,000 ($2,500 to $6,300) per kilo. The most affordable way to sample white truffles in a restaurant is either shaved over pasta, cured beef carpaccio or in an omelet, but carnivores should try the combination of a white truffle and a classic Tuscan steak from the local Chianina cattle breed.

If you want the excitement of finding one (or more) of these prized gastronomic treasures for yourself, sign up for a truffle-hunting expedition with a local expert and a specially-trained truffle dog. For the highly prized white truffles, it has to be from October to December, but the woodlands around San Miniato are also the source of spring and summer truffles. www.truffleintuscany.it offer truffle adventures.

It’s not all truffles. Other delicacies include chestnuts, wild mushrooms, wild asparagus, goats’ cheese and carciofi San Miniatese—globe artichokes which are widely used in pasta sauces or as side dishes. Similar to pâté and served on hot toast, spuma di gota translates as creamed pigs’ cheeks. It’s produced exclusively by Sergio Falaschi, San Miniato’s master pork butcher. Using Cinta Senese pigs which are reared semi-wild and his grandfather’s recipe from 1920, this certainly qualifies as “Slow Food.” The pigs’ cheeks are flavored with herbs, then left to mature in a cellar for at least four months before being pounded to softness. In tartufo season, you can also purchase truffled Tuscan sausages as well as fennel sausages and mallegato, a blood sausage flavored with cinnamon, nutmeg, raisins and pine nuts.

The hills and valleys of Umbria form Italy’s “green heart.” When it comes to jewel-like hill towns and architectural treasures, it can rival neighboring Tuscany. Set above a sea of olive groves, stocked with churches, palaces and an elegant main piazza, Todi is one of the loveliest hill towns of all.

Umbria is all about earthy, rustic cuisine—and Todi’s classic signature dish is palomba alla ghiotta. This is part spit-roasted and part baked wild wood-pigeon served in a sauce of cooking juices, red wine, olives, garlic, sage and rosemary. But residents are also huge fans of all parts of the pig (including wild boar), rabbits, hares, other game birds, black truffles and porcini mushrooms as well as extra virgin olive oil. Legumes too. Like spelt grain (farro), they have been cultivated in Umbria for centuries—chickpeas, fava beans and lentils find their way into numerous broths and hearty stews.

And don’t miss the king of Umbrian street food, porchetta. Sold from food trucks throughout the region, it’s the best pork sandwich you’ll ever taste. That’s unless you have the time and inclination to debone an entire pig, stuff it with its liver, rosemary, fennel and garlic, then roast it for seven hours yourself.

As it’s in the center of the region, Todi makes an excellent base for discovering more of Umbria—places such as Assisi, Orvieto, Spoleto and Perugia as well as numerous smaller medieval towns and villages. A number of Umbrian towns and villages have an annual sagra, or food festival based around one or more local products. For example, Trevi is famed for its black celery, olive oil and sausages.

Based in Todi, www.discoveringumbria.it offer a range of day-long tours visiting small family-run farms, olive oil mills and wineries where you’ll get to sample local delicacies.  If you visit during the olive harvest (October and November), you can take part in the olive picking yourself.

On the edge of the ruggedly spectacular Cinque Terre National Park (home to those famous paintbox fishing villages perched on sheer cliffs), Levanto is a charmer of a Riviera town. Looking out onto the Mediterranean and the Gulf of Poets, it has a castle, a medieval quarter and a romantic promenade beside its sandy beach—this is where the townsfolk come out for the passegiata, the Italian pre-dinner stroll. If you want to stretch your legs further, a network of hiking trails leads to the Cinque Terre and 18 more hillside villages whose terraces are planted with lemon trees, olive trees and vineyards.

Protected by mountains and pine woods, this part of Liguria’s coastline enjoys a microclimate that delivers mild winters and exceptionally tasty food. Anchovies are Levanto’s fishy specialty, but there’s an abundance of fresh shellfish and seafood—shrimp, scallops, mussels, squid, seabass, swordfish, orata, cuttlefish, etc. Served with green beans and a pesto sauce made from fresh basil, garlic, olive oil, pine nuts and either parmigiano or pecorino sheeps’ cheese, the classic pasta dish is trofie al pesto—trofie are a firm spiral pasta made without eggs. Another favorite is pansotti con salsa di noci, which are a triangular-shaped ravioli stuffed with cheese, herbs and greens and served in a walnut cream sauce.

Found only in Levanto, the town’s gastronomic specialty is gattafin—a fried pastry purse stuffed with a savory mix of wild herbs, onions, egg and pecorino cheese. It’s delicious on its own, but with a ragu sauce of wild boar, it’s heaven on a plate. In mid June, there’s a sagra (food festival) devoted to it. Local wines include Colline di Levanto DOC: the reds are primarily from Sangiovese grapes and the whites from Vermentino. Cinque Terre DOC is a similar dry white. And finish a meal with a limoncino, the northern lemon liqueur that’s kissing cousin to the south’s limoncello.

If you’re in Levanto on the third Sunday in May, the Mangialonga is a 10 km wine-and-food hiking festival through the nearby valleys and medieval villages where local bands serenade you. Tickets in 2013 cost €25 ($32); depending on the route, there are either eight or nine stops to sample traditional village fare such as broad beans and salami, torta d’erbe (a filo pastry pie of spinach, cheese and herbs), pasta with tomatoes and mussels, and chickpea pancakes. As it’s limited to a thousand participants, book tickets in advance through www.occhioblu.it, which promotes Levanto as a tourism destination.

Hemmed by the Adriatic, tiny Molise is a mountainous and sparsely populated region that forms Italy’s ankle. Dominated by a 13th century castle, the historic fishing port of Termoli has a borgo antico (old town) with spaghetti-thin alleyways, Blue Flag sandy beaches, a great choice of fish restaurants and curious wooden fishing platforms called trabucchi. Worked by a complex system of poles, pulleys, wires and nets, these antique contraptions resemble giant insects of the sea.

All kinds of fish cooked in all kinds of ways abound. Termoli’s specialty is brodetto alla termolese, a garlicky stew of assorted fresh fish, mussels, clams, shrimp, calamari, tomatoes and hot peperoncino (chili peppers) simmered slowly in an earthenware pan. Those chilis also find their way into polpi in purgatorio:octopus in a “purgatory” of tomatoes. Cozze ripiene are mussels stuffed with breadcrumbs, herbs and cheese; pentolata is a soup made from red mullet.

Held around August 23, the Sagra del Pesce is a festival for hardcore fish addicts who also enjoy live music and midnight firework displays. Termoli’s port area turns into a huge open-air restaurant with communal tables. Freshly caught that morning, hundreds of kilos of fish get fried by fishermen and volunteers. In 2014, the cost for this pescatorial feast was a mere €6 ($7.60).

Perfect with clams or mixed shellfish, pasta favorites include maccheroni/spaghetti alla chitarra, made with a wooden frame strung with parallel steel wires called a chitarra (guitar). A rolling pin pushes the sheet of pasta dough—made of durum wheat and eggs—through the strings. These cut the dough into long strands. Cavatelli are small, folded pasta shapes perfect for catching tomato and meat-based sauces.

With hill towns and pastures on Termoli’s doorstep, carnivores won’t go hungry. The region has a long tradition of shepherding and lamb dishes are popular. Two classics are arrosticini (barbecued lamb on skewers) and agnello cacio e uova, lamb cooked in an earthenware pot and served with an egg and sharp cheese.

Pecorino is the mainstay cheese—it ranges from soft marzolino to aged pecorino romano, which is hard and used mainly for grating. As elsewhere in Italy, there’s pork—local prosciutto and various types of salami and sausage. One to look out for if you enjoy liver is fegato dolce—a smoked sausage made from liver, offal, and pork belly that’s sweetened and flavored with honey, candied citron and orange, pine nuts and pistachios.

And if you’ve ever wondered how a blood and chocolate combination would taste, the region produces the scariest of all Italian sweetmeats. Sanguinaccio/Sfarricciato is pigs’ blood mixed with chocolate, pine nuts, raisins and orange peel. Served warm with biscuits, it resembles thick, hot chocolate. When left to set, it looks more like a traditional blood sausage. What’s not to like?

Climate and Weather in Italy