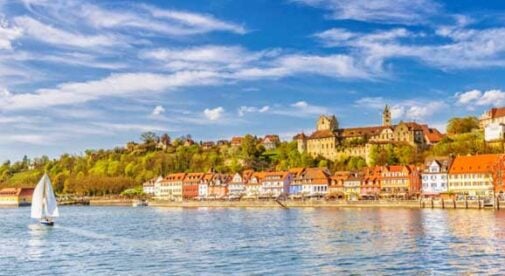 Sailing to landlocked countries may sound impossible, but on Lake Constance, it’s simple. Acting as a natural border at the foot of the Alps between Switzerland, Austria, and Germany, Lake Constance is the third largest freshwater lake in Europe. The lake’s English name comes from the city of Constance, but in German it’s referred to as Bodensee, taking its name from the region of Bodman on the lake’s northwestern coast, so don’t get confused if none of the signs in the area mention Lake Constance.

In winter, the lake is too cold for swimming or sailing, but there are plenty of museums and charming towns that make Lake Constance a wonderful winter destination, and if you’re lucky, maybe you’ll witness the lake freezing and locals ice skating, though this only happens once or twice in a century.

Summer is the best time to visit as the area comes to life with sailors, cyclists, and Zeppelin flyers. Loved by locals and international tourists alike, the lake is a perfect destination for families, couples, and anyone who wants to take a nice stroll along the water. Given the international location, it’s an easy location to tackle a few countries in a short period of time, and the regional Bodensee ticket allows you to use the public transportation in all three countries.

The German side of the lake is the most popular not only because of its size, but because of its diversity of activities and excellent price value. The German section is significantly cheaper than the Swiss side and slightly cheaper than the Austrian area. Most of the lake is situated in Baden-Wurtenburg, and a small section belongs to Bavaria, meaning the region is full of rich, southern German culture and hearty, traditional foods. If it’s a clear day, this northern side of the lake offers the best panoramic view of the Alps, and as it is south facing, it’s well-suited for winemaking, and though the wines of Lake Constance may not be Germany’s most famous, they pair perfectly with fish freshly caught from the lake.

For those interested in history, Constance is a city that can’t be skipped. During the Middle Ages, the city hosted the Council of Constance, during which three popes resided for four years in what was then a small fishing town, ultimately ending the Avignon Papacy and resulting in the execution of Jan Hus, one of the founding figures of Protestantism whose death is commemorated by a monument in the city. In the harbor, the more modern Imperia statue commemorates the council and greets incoming ships. For science lovers, Sea Life aquarium is home to a variety of local and exotic species, and the connected natural history museum chronicles the lake’s natural history. Other interesting sites include the cathedral, which is a stunning example of Gothic architecture, the natural hot springs and sauna, and the Jan Hus museum. As it is the largest city on the lake, it’s easily accessible from other major cities in Germany and offers the most diversity in accommodation and activities.

There are several islands scattered throughout Lake Constance, but most are so small you would have to swim to them. The largest and most easily accessible islands are Reichenau, Lindau, and Mainau, all of which belong to Germany. Close to Constance, Mainau Island is known for its gardens and butterfly house and has a beautiful castle, and on Reichenau, you can visit Reichenau Abbey, a UNESCO World Heritage Site known for its medieval churches. On the other side of the lake almost at the Austrian border, Lindau is a pleasant town for shopping and eating and strolls around the lake, and the harbor’s proximity to the Alps offers the best photo opportunities. It’s the only island on the lake that offers overnight stays.

As the home of the Zeppelin, Friedrichshafen is one of the few places in the world where the vessels still take flight, but if you aren’t up for a sightseeing trip in one of them, their history can be explored at the Zeppelin Museum, which has reconstructions of the Hindenburg and an art collection featuring works of modern art which were banned during the Nazi period. Even if you don’t make it to the Zeppelin Museum, no matter where you stay on the lake, in summer you’ll catch a glimpse of one of these exciting machines as they take flight daily, weather permitting.

Unlike Austria and Germany, Switzerland isn’t part of the European Union and doesn’t use the Euro, so you’ll need to switch currencies once you cross the border, though most places will accept Euros, albeit at a high exchange rate. The Swiss area is much more expensive than the other areas of the lake and the cities are much smaller, so it’s probably best to visit for the day and do some cheaper activities like cycling or swimming. However, if you want to avoid larger tourist groups and enjoy a quiet, scenic stay at the lake, the Swiss side might be for you.

The nearby area of Rorschach has a number of castles that are Swiss National Heritage Sites, and the region has a unique place in Swiss history. Prior to the founding of the Old Swiss Confederacy, the area was a major medieval battle sight. Although it’s not on Lake Constance, St. Gallen is less than an hour away and is the site of the Abbey of St. Gall, which was founded in the eighth century and has one of the world’s oldest libraries.

The most powerful waterfall in Europe is a site that you will never forget. In their history of over 14,000 years, the waterfall’s limestone rocks have changed little since the last ice age, and parts of the river date to prehistoric geological eras, meaning you’ll literally be looking into the past. A viewing point in the center of the waterfall offers a good spot for dramatic photos and the castle nearby offers a glimpse into the area’s medieval history. The site is easily reached by public transportation, and boat tours are operated between April and October.

The Austrian section of the lake is small, but it’s the most easily accessible as there are direct trains from other major European cities such as Zurich, Munich, and Innsbruck, all of which are less than three hours away. In addition to smaller towns that are perfect for swimming, the city of Bregenz offers easy access to both neighboring countries and has evening dinner cruises in summer.

Built entirely over the lake, this world-famous opera house changes its stage every two years for classical opera performances with animatronic sets. Even if you don’t visit in summer during the festival, the open-air arena can be visited free of charge so you can admire the incredible set and re-enact scenes from the James Bond film Quantum of Solace by running through the bleachers. If you’re interested in attending the opera, book your tickets well in advance, but be aware that performances can be canceled at the last minute depending on weather conditions. Throughout the year, guided tours allow you to explore the set and learn about the incredible work that goes into the construction of the set.

For the best view of the lake, take a trip up the cable car to the top of the Pfänder, where there is a petting zoo and traditional restaurant. If you’re up for a bit of exercise, there is also the option to hike to the top along the cheese trail, where you can stop at rest stops and shops featuring information on local cheese production and, of course, tasting samples. For cyclists, there is the option of cycling up the mountain or, if you go in the morning, taking your bike up the cable car and riding back down.

As the capital of the Austrian state of Vorarlberg, Bregenz has many sites worth seeing including the state’s parliament and historical Kornmarkt, but the highlight is the state’s cultural museum, which chronicles the area’s unique history from antiquity to the present. Vorarlberg holds a unique place in Austrian history as the local dialect is different from any other within the country, and at the end of the Austro-Hungarian empire, the state opted to join Switzerland as opposed to the recently founded Austrian Republic only to have the Swiss vote against their annexation. In the museum, you’ll find exhibits on the culture’s unique traditional dress, food, music, and much more. With rotating exhibits and a wealth of work from local artists, you can easily spend all day in the museum. Of course, the best way to experience the local culture is to immerse yourself in it, so stop in a traditional restaurant and order the local specialty called käsespätzle, with cheese from the nearby Bregenzer Forest.

Wherever you decide to go on Lake Constance, you’re bound to have a memorable experience, and even if you don’t make it to any of the sites mentioned, the lake is a wonderful place to take a relaxing stroll or dip in for a swim, and the abundance of activities makes it a perfect destination for repeat visitors, no matter what time of year.