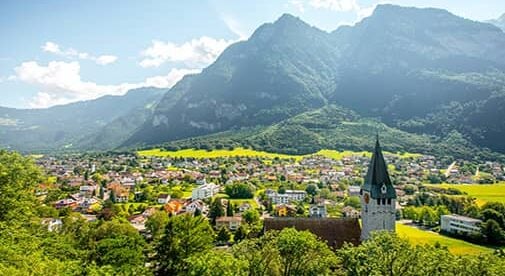 Nestled in the heart of the Alps between Austria and Switzerland, the Principality of Liechtenstein is one of Europe’s last true monarchies, and with its mountainous scenery and medieval castle, the little country looks like it comes straight from the pages of a fairy tale book.

Liechtenstein’s size and proximity to several major European cities such as Zurich, Innsbruck, and Bregenz make it an ideal day trip destination, and a day gives you more than enough time to explore this tiny nation and, for a small fee, add another stamp to your passport.

Due to the country’s small size, the borders are regulated by Swiss authorities and the national currency is the Swiss Franc, but if you only have Euros in your pocket, you can still pay for everything with cash if you don’t mind receiving change in Swiss Francs. However, Liechtenstein has one of the world’s highest standards of living, and the prices reflect that, so if you’re traveling on a budget, it’s probably best to pack a picnic or plan on eating dinner on the other side of the border in Austria.

The country’s national language is German, but the dialect is difficult to understand, and communicating in English won’t be a problem since the country is a center for international business. Due to its advantageous tax laws, Liechtenstein has more companies registered than citizens, and about one-third of the residents are foreign-born, though most come from nearby German-speaking countries. Normally, attaining a visa to live in Liechtenstein is almost impossible unless you are working there, and even so visas are issued only for limited periods of time, but if you’re feeling lucky, the country holds a lottery every year for residency permits, but for the rest of us, we’ll have to settle for a day in this storybook kingdom.

For over 300 years, Liechtenstein has been an independent principality, but the country’s history goes back much further. In ancient times, the area was a crossroads for several different cultures, and thanks to the conquests of Julius Caesar, the area was incorporated into the Roman Empire. During the Middle Ages, when borders were less defined and constantly shifting, diverse Germanic cultures settled into the area. Due to the country’s relative isolation, the different dialects have been preserved to this day so that, even though the country is relatively small, the language differs heavily from one valley to the next.

Despite political independence that survived the Napoleonic Wars and social upheavals of the 19th century, the princely family did not step foot into Liechtenstein until 1818, and even then, the prince’s visit was relatively brief. The first monarch to actually live in the country was Franz-Josef II, who moved to the country when he ascended the throne in 1938. During World War II, the country remained neutral and afterward became the important financial center that it is today.

Due to its longstanding political independence, the country has a long tradition of democracy and operates as a direct democracy, though the monarch still holds a great deal of power under the constitution, making the country something of a political oddity. In fact, the most recent referendum to the constitution in 2003 expanded the powers of the monarch, a move that the people of Liechtenstein overwhelmingly supported. However, it is only recently that Liechtenstein became fully inclusive in its democracy as it was the last European country to adopt women’s suffrage in 1984, a movement that barely reached a majority vote.

The mixture of monarchy and democracy is not the only thing that makes Liechtenstein politically unique. Like Switzerland, the country practices complete neutrality and is not a member of the European Union. It is also one of the few countries in the world without a military. The local police are responsible for safety within the country, and as it has one of the world’s lowest crime rates, they seem to be doing a good job, except for the fact that the Swiss military has accidentally invaded the country several times by crossing the borders during training exercises. Liechtenstein doesn’t seem too worried about actually being invaded, though, as these conflicts are quickly resolved with a few laughs and good wine.

Things to Do in Liechtenstein

During winter, the country is perfect for skiing. Despite the country’s generally high prices, renting skiing equipment and lift tickets tends to be affordable, and the country’s size means it’s less crowded and quieter than nearby destinations. There are also plenty of trails for winter hikes, as well as areas dedicated to cross-country skiing that offer lessons for beginners and experienced skiers alike.

In summer, extensive hiking trails make the country seem much larger than it is, and if the weather is nice, you could spend the entire day wandering through mountain trails, which have been recently expanded and renovated to cover over 400 kilometers (almost 250 miles). If you aren’t up for a full day of hiking, it’s worth taking a short walk up from the capital’s city center to Vaduz Castle. As the castle is the official residence of the prince, visitors aren’t allowed, but the walking trails take you right to the entrance, offering plenty of opportunities for stunning photographs, and if you’re lucky, you might even spot a member of the royal family.

The center of Vaduz is easily walked in 20 minutes, and the courtyard in front of the parliament building is a unique blend of modern and traditional architecture, and the cathedral close to the city center is worth stopping in for a quick visit. For those interested in culture, there are several small museums worth visiting including the art museum, which has a small permanent collection and rotating exhibits featuring works by contemporary artists, and the national treasure hall, where you can see the crown jewels of the royal House of Liechtenstein.

The Liechtenstein National Museum and watch museum are also worth a visit. There are some smaller museums outside the capital, including an outdoor farm museum and other traditional cultural museums. Given the country’s size, these museums are easily reached within half an hour either by car or public transportation.

If you want the full fairy tale experience, visit Gutenberg Castle in Balzers, where you can stroll along the medieval walls for stunning mountain views. Since the early Middle Ages, Gutenberg Castle has protected the valley from its hilltop, and recent archaeological finds have revealed Neolithic settlements, and the prehistoric finds can be seen in the national museum of Liechtenstein. The castle is not an official royal residence and is open to the general public as a museum, but the hours are fairly limited, so double-check ahead of time before driving down. The castle grounds can be explored free of charge, but if you would like to tour the interior, you’ll need to make a reservation in advance.

The traditional cuisine of Liechtenstein is similar to the neighboring countries of Switzerland and Austria, but there are some specialties unique to the region including käsespätzle, also called käsknöpfle (cheese buttons) in the local dialect, which is similar to a macaroni and cheese. It consists of handmade egg noodles tossed in traditional mountain cheeses and topped with fried onions. The most traditional dish is called ribel (pronounced ree-bull), a pan-fried cornmeal-based dough that is loved by farmers since it is cheap and easy to make. It can be served sweet with apple sauce and cinnamon and sugar or savory with salt and sour cream.

Wine has been planted in Liechtenstein for over 2,000 years, and today local vintners carry on the tradition established by the Romans by producing international grape varieties well suited to the unique climate offered by the Rhine river and the mountains. Very little of the wine is exported, so you’ll be tasting something truly unique. For a memorable viticultural experience, take the wine train from Vaduz and explore some of the country’s vineyards, including the princely winery owned by the royal family, which offers unique tasting experiences at the vineyard. There are a few other small wineries in the country, but reservations should be made in advance if you want to do an on-site tasting.

Though it’s possible to see just about all of Liechtenstein in a day, a trip to this tiny country will be one to remember, and the dramatic changing of the seasons and beauty of the Alps make it an appealing destination year-round, ensuring that whenever you visit Liechtenstein, you’ll feel like you’re walking through the pages of storybook.