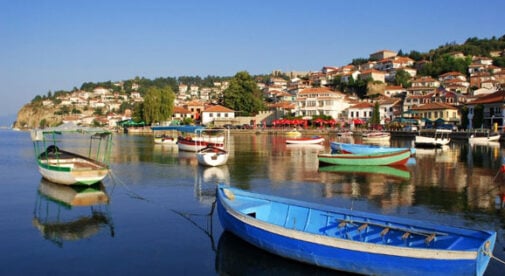 How do I love thee, dear Ohrid?  I honestly can’t count the ways. But suffice to say that my three months stay here last year wasn’t enough, so I’m back for another 90 days. Of the hundreds of cities and towns I’ve visited (and 41 countries so far), Ohrid is in my top 10, hands down.

Where do I begin? The town of Ohrid, a UNESCO site since 1980 with a population of 42,000, is nestled in a basin in the mountains on beautiful Lake Ohrid, and is considered by Macedonians to be the crowning jewel of their country. The town is the favorite vacation spot for Macedonians, but as more foreigners are learning about this hidden gem, tourism is increasing.  But before the word gets out, come for a visit. You’ll find a rich history like no other, immaculate streets, the warmest people you could ever hope to meet, and prices that will make you think of those books published in the 1970s, boasting that one could see Europe for $10 a day.  While it’s not quite that low, it’s pretty close.  The apartment I rent here is $300 a month, and it’s far beyond most travelers’ expectations for a vacation rental. Groceries and meals out are also relatively inexpensive.  (Minimum wage is €307 per month ($337), so that gives you an idea about the economy.)

Before hitting the must-see/do highlights, a bit on the history of the area.  At 1.4 million years old, the Ohrid Lake is the oldest in Europe, and one of the oldest in the world.  It’s also the deepest in Europe (288 meters), and oh, the trout!  It’s on every menu in town and served in all the restaurants dotted along the shore of the lake.  But I digress…

The town was first mentioned in Greek documents in approximately 350 BC, at that time known as Lychnidos (the city of light). In the 9th century, it was given its current name, which translates roughly to “in the cliff,” no doubt named because the town is built on/into the enormous stone cliffs at the edge of the lake.  Ohrid is also informally known as the “Jerusalem of the Balkans,” due to the claim that there are 365 churches in the town and outskirts. Some of these churches are now ruins, but many are well preserved, and tourists can enter for a dollar or two and take in the beauty. Probably the best known are St. John the Theologian (known locally as Kaneo, situated on the cliff above the lake) and nearby St. Sofia.

A full history requires volumes, but let’s hit the highlights as we explore the town.

Things to See and Do in Ohrid

The first sight one sees when approaching Ohrid is the massive Samuel’s Fortress, built in the 10th century, but actually on the site of an earlier fortification dating back to approximately 400 BC.  The fortress was restored at the turn of this century, and is definitely worth a stop on your visit.  The stairs are a bit small, but equipped with good handrails, so be sure to climb to the top of the walls and have a walk around for spectacular views of the town and lake.  And from nearly everywhere in town, one can see the fortress, which is spectacularly lit at night.

Just downhill from the fortress is the ancient theatre, built in 200 BC, the only Hellenistic-type theatre in Macedonia.  It was carefully built between two hills to provide some protection from the winds (and therefore to optimize acoustics), and the seats face the lake.  It was originally built for plays and entertainment, but later, during Roman times, was the site of gladiator fights (with the usual wild beasts thrown in for good measure).  However, since it was also the site of executions of Christians by the Romans, with the demise of the Roman Empire the locals buried the entire theater to blot out the terrible history.  It wasn’t until the 1980s, during routine construction around some houses in the area, that the theater was discovered, uncovered, and eventually restored.  It’s now used for plays, concerts, opera, and ballet, as well as for some of the higher-profile performances which take place during the annual Ohrid Summer Festival (whatever you do, don’t miss that, roughly mid-June through mid-August every year). But if there are no performances going on and you’ve just made the climb to the fortress, just a few meters down from it you’ll find the theater, and you’re welcome to just stroll in and sit on the stone seats in the afternoon sun, enjoying the views (no charge).

Another stop you’ll want to include during your visit to Ohrid is the Bay of Bones Museum.  This is a reconstruction of a Bronze Age village, built on stilts over the water, with items recovered from the lake from the Bronze and Iron Ages. It’s just south of the town and easily reached by taxi-boat or driving.  While you’re down that way, make time for a stop at St. Naum Monastery (10th century), just a few miles farther down the lakeshore.  While you can drive or take a taxi-boat there as well, for just €10 ($11) you can hop on a lake cruise boat which serves both locations, so pack a picnic and make a day of it.

So that’s a few historic places to see, but what about the town itself?

The town center is just filled with delights. The main streets through town are of course paved, but the smaller roads, lanes, and footpaths (many involving steps as you climb through the winding streets in this hill town) are mostly cobblestones, so do watch your step.  But there’s nothing more enjoyable than roaming the winding lanes and paths throughout this old town, exploring every nook and cranny.  The main shopping district is completely flat and certainly wide enough for traffic, but it’s for pedestrians only, and filled with every kind of shop for both wants and needs.  Cafés abound and the coffee is absolute heaven, but you can also stop by the local coffee roaster and bring a bag of freshly roasted coffee back to your accommodation for that first cup in the morning.  Pastry and bread shops are everywhere, as are small supermarkets for buying fruits, vegetables, and all of your other grocery items.

While you’re browsing the shopping district, you can’t help but notice the ubiquitous jewelry shops here, and that’s because the famous Ohrid pearls are made here, using a top-secret formula that has never been shared. I recently visited the Talevi family to try to learn a bit more about it, but as you can guess, I still know very little, except that the coating of the pearls involves an emulsion from the plashica fish from the lake.  The pearls are stunning, and have won many awards, including a first-place gold medal at the prestigious Brussels EUREKA awards in 2001.  The Talevi family began making pearls in 1924, and they are now a fourth-generation business.  And the best news is, the pearls are very affordable, so treat yourself to a wearable souvenir from Ohrid. (Or if you’re the creative type, there are small workshops where you can design and create your own silver filigree jewelry, adding pearls or any other gems you desire.)

Another place you’ll want to stop is the National Workshop for Handmade Paper, which also houses a small museum and gift shop. This family business is one of only seven places in the world still making paper in the ancient Chinese method from the second century BC. In addition, they have a 15th-century Gutenberg printing press, one of only two in the world.  As you enter, you’ll walk past clotheslines of handmade paper drying on the outside porch, but once inside, you’ll be treated to a behind-the-scenes demonstration of how the paper is made.  You can also watch the paper-masters using the Gutenberg press to print scenes and other art depicting the history of the town, and all of this is at no charge.  They have countless items for sale which are made from their paper, so whether you want to pick up a few prints as a memento of your visit, or perhaps buy a small notebook or greeting cards made from their handmade paper, everyone is sure to find something they like.

Finally, if you’re an active outdoor type as I am, you’ll find plenty to do in Ohrid.  In addition to the obvious on a clear, deep lake (swimming and scuba diving), there are boat cruises, kayaks to rent, and well-maintained cycling and walking paths around the shore of the lake.  But my favorite, hands down, is roaming the miles of walking paths in the hills above the town (it’s called Old City Park). It’s big, quiet, wooded, with great walking trails (some paved with stones, others earth), and there are picnic shelters and benches along the paths.  You’ll feel completely renewed after breathing the fresh air as you explore forests and fields, enjoying wildflowers buzzing with bees, and listening to birds serenading you. Better than a spa, in my humble opinion.

And that’s just the tip of the proverbial iceberg for things to see and do in Ohrid.  You’re never bored here, no matter what time of year you visit, and the sheer beauty is a photographer’s dream come true. Instagram-worthy and no filters needed!

So, what are you waiting for? Book your flight into Skopje, catch a bus to Ohrid (or hire a driver—very reasonable), and come see this incredible town for yourself.  But you’ve been warned—once is never enough here.  I’m living proof that no matter how long you stay, you still want more.  Look me up and say hello when you get here, because no doubt I’ll be back again and again…