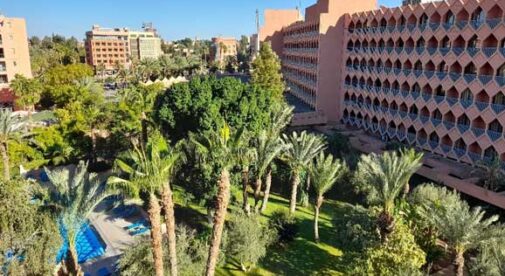 The Hivernage Square district is home to many top-rated luxury hotels, some featuring casinos and nightclubs. ©Beverley Thompson

As we entered Marrakech, its clean, modern thoroughfares and palm-lined streets made it feel as though we were driving through a sanitized suburb of Miami. Our guide, Hamza, welcomed us to the “Red City” (so named because of its proliferation of red clay buildings and ramparts), a cosmopolitan city whose first impressions completely blew our minds. A far cry from Fez’s medieval Medina, and a world away from the dromedaries of the desert Kasbahs, Marrakech looked and felt…well…very civilized. A place Beverley and I could imagine living, rather than just visiting.

Beverley and I spied on the bustling shoppers as we enjoyed some mint tea at the mall’s Café Paul—where the waiter taught us the correct way to pour tea…from a height of about two feet, that is, to aerate the tea by instilling bubbles and a thin layer of froth. Looking around, it was surprising that this was the same Morocco we had experienced thus far. I began to understand why some people become captivated by its natural and demographic diversity—and choose to stay. Despite the culture shock we felt upon arrival, Morocco was beginning to grow on us.

As we walked back to our hotel, our eyes scanned the tree-lined, tiled pathways stretching between the entire length of the roadways, taking in the romanticism of couples sitting by the fountains amongst the lush green shrubbery and towering lampposts, as black and white terns swooped overhead, landing at our feet seeking treats!

For those who enjoy the comforts of familiarity, the nearby train station even hosts a Starbucks and a McDonald’s—although we chose to seek out more authentic dishes, like tajine, for which low-priced options abound.

But low food and drink prices aren’t the only deals to be enjoyed. A cozy, 450-square-foot, one-bedroom, one-bath newly built apartment, with an American kitchen, Italian bathroom, and full balcony, right in the heart of the Gueliz district, is listed at $65,000. You’ll pay the same for a slightly less modernized 936-square-foot, two-bedroom, two-bath unit in the same neighborhood. Or you can splurge and buy a stunning 810-square-foot, two-bedroom, two-bath penthouse unit, listed for $125,000.

If you’re looking to rent, a modern, 1,076-square-foot, two-bedroom, one-bath apartment with a grand terrace and parking leases nearby for $750 per month. (Outside these grandiose neighborhoods, one can pay as little as $300 per month for similar units.)

Djemaa el-Fna, the city’s main square market in the heart of the Medina, bears many similarities to Fez’s Medina—although it’s arguably a bit less frenzied, and a touch less archaic. The square is home to a daily entourage of monkey handlers, musicians, mind-blowing performers, and its infamous snake charmers.

Beverley and I sheltered ourselves from the midday sun on the sideline patio of Café de France, allowing our eyes to feast upon the incredible spectacle unfolding around us. A young lady, seemingly made of elastic bands, performed a stunning 20-minute acrobatic juggling act that mesmerized the crowd—and visually exhausted us. Musicians filled the air with a mishmash of eclectic tunes, ranging from classic rock to Gnaoua and Arabian instrumentals, while the shrill of snake charmers’ flutes whistled softly in the background. Vendors screamed their latest bargains from underneath a sea of sun umbrellas and colorful tents toward the masses of frenzied shoppers, all pushing and shoving along the spider web of narrow streets emanating from the square as though cramming themselves onto a crowded bus. Tuk-tuks and motorcycles whizzed by, snaking their way through the melee. It was action-packed candy for the eyes, as these raucous activities collaborated to provide a vibrant palette of enthusiastic live theater.

Rows of kiosks dispensed freshly pressed juices (orange, apple, papaya, mango, banana, and berries), for just fifty cents a cup, Moroccan candle lanterns spread over tattered clothes on the ground sold for $1 each, while a fellow dressed like a medieval Arab warrior roamed the streets selling daggers to startled tourists for less than the price of a chicken. Just as in Fez, if you bargain right, the most frugal shopper can feel like a sultan.

Foodies can enjoy delicacies like braised, slow-roasted lamb and calamari pizza, as well as such unusual and bizarre offerings as sheep’s head ($8 at Tete de Mouton), and scrumptious boiled snails. I devoured a bowlful of the latter for fifty cents at a pop-up restaurant kiosk, with the blackened rubbery critters served in a peppery mint tea (which you sip down afterward), still in their shells. Using a toothpick, I pried the gooey blobs from their shells, trying my best to ignore their eyeballed tentacles as I chewed them like gum. (At least the peppery tea juice was enjoyable!)

Along with dozens of street food kiosks that pop up each evening after dark, the square itself takes on a carnival-like atmosphere, transforming into a parade of lights and music. Circles of spectators gather on makeshift stools to watch the impassioned Berber drummers and Gnauoa musicians entertain audiences under the bright, starry sky (performances are free, but tips are appreciated).

Getting lost within the labyrinth of alleyways looping through the souks is rarely without its reward. Treasures await those curious—and brave—enough to venture deep into its narrow and winding passages. That’s how Beverley and I stumbled upon Le Jardin Secret (“The Secret Garden”), an aptly-named lush oasis in the center of a palatial riad (a traditional manor house) in a section of the market known as Mouassine. Behind a towering, windowless wall running alongside crumbling structures and the omnipresent chaos of the busy souk outside, hides this serene reprieve—a traditional Islamic garden with cascading fountains, a sheltering pavilion, and exotic plants and trees from five continents.

Recently restored, exhibits demonstrate the process of its restoration—including its original underground irrigation system that channels water to the garden from the nearby Atlas Mountains. We climbed the adjacent tower, inhaling a bounty of floral scents, to gaze upon the landscape—framed gloriously by the mountains in the background. Meanwhile, the harried population of the Medina below seemed blissfully oblivious to this glorious oasis secreted behind its wall.

Across the street from the gardens is Café Arabe, a wonderful place to enjoy very reasonably priced food and cocktails on a rooftop terrace showcasing lovely views of the gardens and souks below. Around the corner, you’ll find Dar El Bacha, a former palace now operating as a museum. A coffee shop inside offers a huge selection of rich coffees from many volcanic regions—sporting a coffee menu so voluminous it reads more like a book. Starbucks would rightfully blush.

Of course, all of this would not have been possible without the help of my new friend, Rachid Oudada. Often great friendships are forged in times of distress and need, as was ours. Beverley and I had become lost following poor directions provided by Google Maps. We found ourselves stuck in the middle of a mammoth field of trash, in a challenged and impoverished neighborhood, when Google cluelessly announced we had arrived at the Medina.

Tired and sweaty after a long walk across town, we approached a gentleman who was climbing into his vehicle at a nearby residence, seeking better directions. Rachid spoke fluent English and explained that he was a tour guide who had hit on rough times due to the impact of COVID on the tourism industry. He told us that we were on the wrong side of town and that it was too far to walk. “Climb in,” he said. Although running late for previous plans, he graciously offered to drive us across town, where a “collective” taxi would take us the rest of the way to the Medina. “In Morocco, we have a belief,” he explained, “that when someone comes into your life under strange circumstances, it is for a reason.”

Not only did Rachid drive us across town to the taxi stand, but he also negotiated a “local rate” for us—one not typically offered to travelers. When I offered a bit of money to cover his gas, Rachid was horrified. “Please be serious,” he said. “You’re my friend now.”  He even called 30 minutes later to ensure we had found our way to the Medina. But his character is not unusual in Morocco, whose people rank amongst the friendliest, most easygoing, and accepting people I’ve encountered during my world travels.

Many of the expats we met along our journey had implored us not to leave Marrakech before visiting the Jardin Majorelle—a living work of art imagined by French painter, Jacques Majorelle, comprising of exotic plants and various rare species that he had collected himself while traveling the world. Following his death in 1947, the gardens were abandoned until 1980, when clothing designer Yves Saint Laurent saved it from the clutches of real estate developers. A memorial to the fashion mogul now sits in the garden, where a “Love Gallery” of paintings also celebrates his contributions—which included gifting the gardens to the city of Marrakech upon his death.

Located in the Ville Nouvelle, cranes are busily erecting residential structures everywhere around the garden’s perimeter. Posted signs include impressive renderings of condos and offices currently under development, such as “Atlassia Majorelle”—a structure that will soon encompass an entire city block, close to shopping, restaurants, and other amenities.

As we strolled amongst the garden’s 300 varieties of palms, cacti, and other tropical plants, and sat on the blue-and-gray painted tile ledge surrounding its coy pond, enjoying the serenity of the wonderful nature surrounding us, we reflected upon the wonderful time we had spent in Marrakech.

Surrounded by mountains and desert landscapes, and a short drive from the Atlantic coastline, Marrakech has been called “a rose among palm trees,” “an oasis in the desert,” and “the city of peace and open-air.”

I couldn’t have put it better myself.