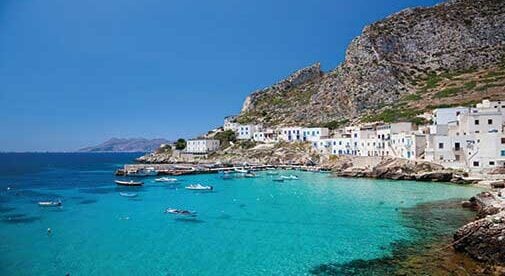 Sicilians are fiercely proud of their island. When it’s as perfect as this, it’s easy to understand why. ©iStock/photovideostock.

Sicilians are proud people; proud of their heritage, proud of their food, and proud of their island. But the one big difference that they want you to understand, is why Sicily is even more fabulous than the rest of Italy. And they are prepared to go to the ends of the earth to prove it.

I assumed Sicily would be little more than an extension of “the boot,” just another part of Italy to love. I was wrong. It’s better than that. It’s what Italy was like before the throngs of tourists (self included) invaded it yearly. Look, anyone can go wine tasting and sightseeing in Sicily. That’s fun, if you’re happy with the beaten path. But here are a few insider choices to add a little zing to your trip.

A small town of about 1,200 people nestled in a valley, Novara is built where the Nebrodi and the Peloritani mountains meet. Wander the narrow cobblestone pathways in any direction, under archways covered in wild grape vines, and you’ll run into a relic of some sort.

The 16th-century cathedral in the Piazza Duomo looks like any other beautifully adorned Italian church until you step inside and see the crypt. Its doors are not only heavily locked; they are electrified to keep out thieves. As you step down into the vault, gingerly avoiding the electrified walls, you pass six mummified bodies in various states of ruin. Five of them have collapsed onto the glass partition, leaning forward as if bowing to a king.

The lone standing saint, with all of his teeth and robes still intact, is that of John Baptiste Raccuia. (Yes, Raccuia, my name—apparently a long-lost relative from many centuries back.) Regardless of whether you are related to a saint, to be in this small crypt full of bodies is gruesome and fascinating at the same time. Worth a trip.

If you are lucky enough to be there in February, you’ll be witness to a festival that dates back to the 16th century, and it only happens in Novara. The Tournament of the Maiorchino is a cheese rolling race. Sixteen teams of three compete to spin a 22-pound wheel of local, sheep’s milk, Maiorchino cheese down the cobblestone steps through the old town for about a mile. The winner is the team with the wheel that has fallen the least number of times

For a taste of local farm-to-table food, head to Girasole Agritourismo. It’s a small local farm where you can rent a room for a few days if you wish. Otherwise, just go there and feast. It served up one of the best meals I had in Sicily, and that is saying a lot. Of course, it started with antipasti which included Maiorchino cheese, warm homemade bread, black boar salami, and veal tartare. Then they brought out three local varieties of pasta, in dishes big enough to bathe a small child.

If that weren’t enough, out came a mountainous plate of grilled meats. Everything was grown and produced on site, and although I had trouble understanding the chef, in the end, food trumps all translation problems. They serve up a massive spread, including all the homemade wine you can drink, and dessert. All for under $20 a person.

Realmonte and the Scala Del Turchi

After a few days of medieval villages and packing on the pounds, a little beach day is a welcome respite. Head over to the town of Realmonte, along the southern coast of the island, to see the Scala Dei Turchi, or Turkish Stairs. The natural curves of the steps have formed over centuries, but they got their name because it was an easy place for the Turkish seafaring pirates to land in Sicily and invade.

Blinding white marl, clay, and silt stairs jut up 150 feet from between two flanking beaches. The steps look entirely man-made, totally smooth and cold, like white cement, but are in fact all natural. Some say the wet marl has healing properties for the skin, so slather yourself up and let it dry before diving into the Mediterranean. Or just go and watch the sunset for a breathtaking view of the turquoise sea, against the bright white of the marl with an orange glowing sun in the background. It’s a choice spot for photos.

On the southwest coast of the island is a small city that was once the biggest fishing town in Italy. Its port still houses the country’s largest fishing fleet. In 827 A.D., the area was conquered by the North African Moors who made it their headquarters with the goal of conquering the rest of Sicily. The labyrinth that is the city center, or La Kasbah, is a maze of winding pathways barely broad enough to walk through, yet somehow local cars seem to pull their mirrors in and wildly take off for a spin, narrowly missing pedestrians.

The Kasbah still maintains its original architecture, including a hammam, or public bath, that’s still in use. The only recent addition is hand-painted ceramic tiles on the walls depicting scenes of times past. As you wander these streets, you can imagine what it was like centuries ago when Moors ran the town. Today, out of the 50,000 residents there, about 3,500 are ethnically Tunisian, and the food reflects it. Find a bustling cafe and get some local Tunisian couscous with the day’s fresh catch, but save room for dessert.

If you can find the cloistered Benedictine nuns’ nondescript doorway (ask around), you can have traditional cookies freshly baked using ancient recipes. Once inside what feels like a dungeon, ring the doorbell and a window, crosshatched with iron bars, opens. All you can see is darkness, and because the nuns aren’t allowed to see, touch, or speak to people, they look the other way as you request your cookies. The scrumptious almond marzipan cookies filled with pumpkin and covered in sugar arrive in a paper bag, through an iron lazy Susan, because there can be no accidental touching while passing over your goodies. They can’t ask for money, so offer whatever you think is fair and put it in the lazy Susan. 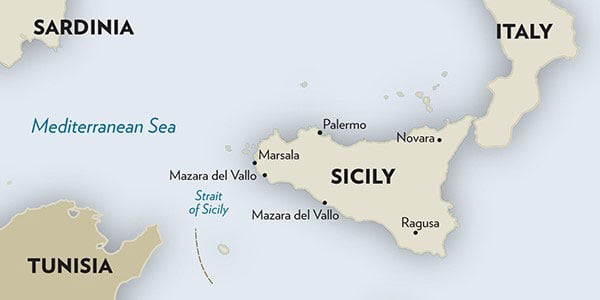 It seems like all of Sicily is wine, olive, and cheese country. The hardest part is choosing which producers to visit. When in doubt, always ask the locals. In the Piazza del Purgatorio, you’ll find a little restaurant called Ciacco (See: Ciaccoputia. it) run by Francesco and his wife, Anna. It’s a simple place, serving a few items of whatever is freshest at the moment. It’s also a deli with only the best local delicacies. Their truffled mortadella is silky, fatty, and heavenly to accompany the local prosecco.

Ciacco have a small but well-curated assortment of local wines, and Anna can pair anything Francesco puts on your plate with a perfectly profiled wine. The entire concept is small plates, only local ingredients, and most of all, made with love. They love each other, food, and wine, and that transfers very clearly to their guests. They were the perfect couple to ask about their favorite producers to visit, and they were all too happy to guide me.

Drive about 45 minutes inland to Salemi and you will find a small, family-run sheep farm, called Cucchiara (see: Aziendacucchiara.it). As I pulled up, peacocks scattered and a young man in muck boots and an apron came out to meet me. This is more a family production that opens its doors to locals than it is a producer who welcomes tourists. But he greeted me graciously with a little English. Thank goodness for Google Translate.

It’s what Italy was like before the throngs of tourists.

He took me to see about 100 bleating sheep running around happily with their newborns; a noisy but beautiful sight. I was lucky enough to hold a four-day-old lamb that was barely steady on his feet. I followed maestro muckboots to a tiny room filled with huge vats of milk in various stages of cooking. There, I got to taste warm fresh ricotta that was rich and buttery and watch the making of a creamy, yet firm cheese to which they add fresh basil, bay leaves, peppercorns, and chili peppers to make it the colors of the Italian flag. Sadly, that one wasn’t ready for tasting. However, I did taste all of the others that were ready and left with two kinds of cheese and a pound of their latest batch of cured olives.

Stay: Hotel Carmine (see: Hotelcarmine.it). For under $100, this is a lovely boutique hotel that is centrally located, includes breakfast and parking, and has a gorgeous courtyard garden to sit in and smell the jasmine trees as you take in a nightcap.

Almost on the southernmost tip of the island is a small medieval hamlet dating back to the second millennium B.C., called Ragusa. The village is built into the walls of a gorge, so your first view is of homes and churches snuggled up on top of each other, clinging to the limestone. Ragusa Ibla is the older section of town and where the Ibla Buskers Festival takes place every year in October.

This is not a collection of street jugglers begging for money—it’s a major festival that’s been running for decades. On every winding, narrow, street corner, you can find a performance. Acrobats hanging from aerial silks, jazz trios, fire throwers, all performing with the backdrop of a well-lit piazza, or a palace, or a cathedral.

Grab a cup of prosecco with the locals and saunter through the streets watching each performance. When you get a case of the nibbles, pop into Il Barocco for fresh pizza and pasta of the day. Stay: Hotel Il Barocco (see: Ilbarocco.it), $80 a night, including a large Italian breakfast of fresh fruits, cheese, bread, meats, juices and as many cappuccinos as you want. Ask for a room with a balcony so you can pop out and see the happenings on the street.

Eat: Il Barocco, the nearby restaurant with the same name as the hotel.