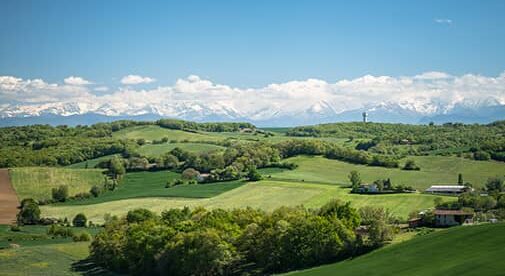 My mother died shortly after her 100th birthday. Two years earlier, I’d moved to California from Port Angeles, Washington, to take care of her. Now she was gone and I was 68 with no idea where to go next.

California was too expensive and held little for me and although my kids and granddaughter lived in Washington, they had their own lives and I didn’t want to live on the periphery of theirs.

I’d always had a dream of one day moving to France. I’d grown up on the southeast coast of England where, on a clear day, supposedly, you could see across the channel to Calais. Usually, though it was too foggy—kind of like my idea of a move. I knew a vacation wouldn’t satisfy me, I wanted to experience the lifestyle, learn the language, live like a local. But it all seemed too complicated and difficult. The sort of thing you’d consider in your youth, or even as a retired couple—but not alone and, not at my age.

Still, I couldn’t drop the idea. I pictured myself in a small village. No car, I wouldn’t need one. I’d take long walks, buy baguettes and fromage from quaint little markets. There’d be convivial evenings with the villagers, drinking wine as we exchanged philosophical views. My French would be perfect, of course.

I Googled “cheap places to rent in France”. Since I didn’t know much about the different regions, where I lived didn’t matter as much as finding something I could afford on little more than Social Security. Rents in some areas, I was pleased to discover, were roughly the same as what I’d been paying in Washington and definitely cheaper than anything in California.

Eventually, I narrowed the possibilities down to a cottage in the southern region of Occitanie. Described as “quirky, but charming”, it had 18th-century stonework and vaulted ceilings. One picture showed an antique black stove with a glowing fire, the other appeared to be of a narrow concrete ledge which I imagined filled with indoor plants. After a few phone calls with the owner, I agreed to a year’s lease.

On arrival, I discovered it wasn’t quite the cozy cottage I’d envisioned. In fact, it wasn’t even a cottage. Located on the main street of a small winemaking village, it was a tall, thin house, sandwiched between other tall, thin houses. Similar houses opposite effectively blocked all but a narrow strip of sunlight. As I knocked on the front door, I glanced up at the blue sky. It was like looking up from a very deep canyon.

“I wanted to get it ready before you got here,” the English landlady said as she let me inside, “But I’ve hurt my back and haven’t been able to get out of bed.”

I descended three steps into the living room and peered into the murky gloom. The only source of light came from two tiny windows in the kitchen and bedroom and a frosted pane in the bathroom. The concrete floors were uncarpeted, the walls unpainted bedrock.

“Cavelike” came to mind, an image fortified by two enormous wooden dressers that stood, like hulking beasts, against the crumbling stone walls. Plaster from the whitewashed ceiling had fallen like snow across the wooden surfaces. More plaster lay in drifts over a turquoise Formica table with a broken leg propped up with a jam jar. Almost obscured by a faded couch, was the antique black stove, doors bolted shut.

“It doesn’t work,” the landlady said.

So much for the glowing fire. Deflated, I glanced at the kitchen area and realized that the picture of the concrete strip I’d imagined decorating with plants was actually an awkwardly angled shot of the kitchen. A shallow brown sink stood under the window; against the wall, a tiny refrigerator nudged an equally minuscule gas stove. In order to plug in the coffee pot, I would have to close the window shutters.

“This isn’t IKEA,” the landlady said, perhaps having read my expression. “It’s a place with history.” And no, she added there was no microwave or toaster. Her next words were drowned out by the roar of a  motorcycle careening past.

I asked about a washing machine. She shook her head. “There’s a laundromat in the next village.”

Then she hobbled back to her own place upstairs.

As plaster fluttered from the ceiling, I tried to calm down. Reality seldom matches expectations, I told myself. At least I had a roof over my head. Electricity. It could be worse. The motorcycle zoomed past again, then it zoomed back. From upstairs, laughter from the landlady’s TV. Philosophical discussions seemed unlikely.

Eight years later, now living in the village of Laurens, not far from that first cavelike dwelling, I look back with amusement at those early days.

I did stay for the duration of the lease; a few rugs, plants, and lamps helped with the gloom. Eventually, I even had friends over—people I met through expat groups on Facebook and, as my French improved, a few of my neighbors. I also bought a car, which solved a lot of problems.

While it’s not a great idea to rent sight unseen, I’m grateful for the experience and what it taught me about the difference between my romantic notions of France and the realities of actually living here. Daily life abroad, like anywhere, has its challenges, but I came to France seeking something different. I found it and, quite honestly, I’ve never been happier.