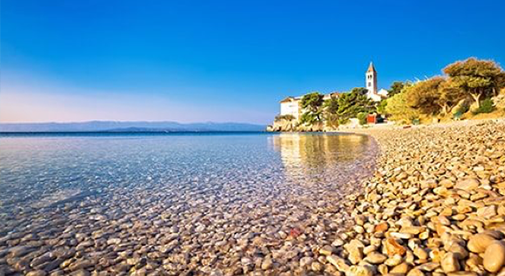 History and natural beauty rub shoulders on the island of Brač. The water is pristine, too. ©iStock/xbrchx.

It was a gloriously sunny autumn day on the Croatian island of Brač. Determined to find a 1,700-year-old Roman stone quarry, my husband and I brushed past a grove of handsome olive trees with gnarled trunks. Decidedly lost, we chanced upon a mother and son harvesting massive tubs of eggplant-colored olives.

“Dobar dan,” we said, proceeding to ask them where the island’s historic quarry is. Pointing in the direction of the sapphire-blue Adriatic in the distance, the friendly pair directed us to the correct path. Eventually, we found ourselves in the Rasohe Quarry (Rimski Kamenolom), near the village of Splitska.

In the 3rd century, Roman slaves toiled in this quarry, extracting massive slabs of radiant white limestone. Hauled across the Adriatic, the precious material was delivered to present-day Split, where the palace of the retired Roman emperor, Diocletian, was being constructed. Today, this journey takes a mere 50 minutes by ferry. However, back then, transporting the stone would have taken much longer and been an impressive feat.

Aside from chisel marks on the stone walls, not much remains of the old quarry. However, there is one fantastic find—a weathered relief of Hercules wielding a club over his shoulder. It is believed that Hercules’ likeness was carved by laborers who worshipped the mythological figure for his strength.

Brač’s high-quality stone wasn’t just incorporated into Diocletian’s magnificent palace. It has also been used to adorn parts of the White House, several European parliament buildings, and some of Croatia’s most famous cathedrals. Today, the village of Pucišca is home to a respected stonemasonry school (Klesarska škola), where students from Croatia and beyond come to learn this traditional art. With many graduates of the school now living on Brač, there are naturally many limestone souvenirs to purchase. You can find boutiques selling hand-carved bowls, mortars and pestles, rolling pins, and more.

In addition to being renowned for its high-quality limestone, Brač is also known for its fine olive oil and wine, hermitages (which are well-worth the hikes to reach them), tranquil stone villages, and beautiful beaches and coves.

Brač is known for its fine olive oil and wine.

The island’s most famous beach, and arguably one of Croatia’s most photogenic, is Zlatni Rat (Golden Cape). Jutting out into the emerald and turquoise Adriatic, and comprising of white pebbles, the beach is understandably popular. However, during our autumn visit, we had the idyllic spot to ourselves. As the sun was just about to set, we dipped our toes in the cool sea and watched as a sailboat glided by.

While on Brač we also journeyed to the sleepy hilltop village of Škrip, the island’s oldest settlement. Sarcophagi (ancient stone tombs) dot the rugged landscape of this area that was once inhabited by the Illyrians and Romans.

Škrip’s Olive Oil Museum (Muzej Uja) is housed in a mill that dates back to the mid-19th century. It was recently restored by a family that descends from the original owners. Inside, you can learn how olives were traditionally ground and pressed.

When we visited, the owners, along with several friends, were celebrating the end of a day spent harvesting olives. They were dining next to the historic mill at a table spread with glasses of homemade wine, plates of local Dalmatian cheese, and hunks of air-dried pršut (prosciutto). They gave us a tour of the mill and then invited us to join their feast. Entry to the Olive Oil Museum is 15 kuna ($2.25). You can also purchase a bottle of the family’s high-quality olive oil. See: Muzejuja.com.

Croatia is a member of the European Union; however, it uses the kuna, not the euro, as its currency.

Croatia’s Dalmatian Coast is serviced by international airports in Dubrovnik, Split, and Zadar. Split is Croatia’s second-largest city and is also a transportation hub for buses and ferries. A boat ride from Split to the island of Brač (and the towns of Bol, Milna, and Supetar) takes between 30 and 60 minutes. Catamarans are faster than ferries. For timetables and ticket prices, see: Jadrolinija.hr/en/ferrycroatia or Krilo.hr/en.

It is possible to explore Brač by bus, taxi, or rental car. You can either bring a rental car from the mainland (via the ferry) or rent one on Brač. Supetar is Brač’s hub for bus transport but know that the island’s connections can be rather limited. See: Arriva.com.hr/en-us/dalmatia/supetar.

You can find hotels, as well as privately owned rooms and apartments, throughout the island. However, the coastal towns of Bol and Supetar have the greatest selection. If you visit Brač during the off-season and wish to stay for a longer period of time, you might find a better deal by asking around. Most properties are clearly identified with “room” (sobe) or “apartment” (apartman) signs. Island Hop: The city of Split offers the most boat connections to Croatia’s islands. However, depending upon the time of year, it is possible to island-hop directly from Brač to the islands of Hvar, Korčula, Mljet, and Vis.

How to Sail Croatia’s Adriatic Coast for Less

The Best Places to Visit in Croatia