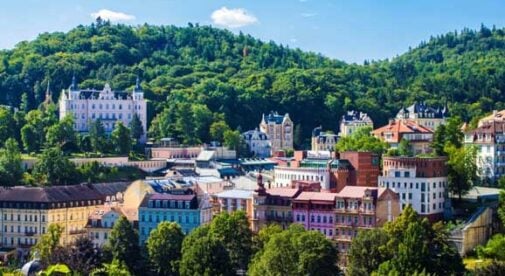 “This isn’t what I was hoping for,” my fiancée Yuliya grumped as we strolled a mundane street from the train station of Karlovy Vary, the 650-year-old Czech spa town founded by Holy Roman Emperor and King of Bohemia, Charles IV. Five minutes later, as we approached the town center, she had drastically recalibrated: She was in love.

Europe is chockablock with beautiful cities, towns, and villages, but Karlovy Vary is high atop the list of the ones I’ve visited…and I’ve seen over 50% of Europe so far. It’s like the gods of architecture and ambiance took the very best of Old Town Prague, dressed it elegantly in a Belle Epoque sheen, and then purposefully placed their creation into the low-rise forested hills along the Czech-German border. For giggles, they piped in geothermal springs that bathe Karlovy Vary in a misty dew and which provide locals and tourists easy access to waters purportedly beneficial for everything from gastrointestinal diseases to chronic hepatitis.

In short: Karlovy Vary is a lovely little destination—three lazy hours by train from Prague—where you will spend your days well-pampered, well-fed, and well-rested, and possibly emerge healthier than when you arrived.

Travel publications regularly rate Karlovy Vary one of the top 10 spa towns in Europe and with good reason. The main, pedestrian-centric colonnade is lined with more than a dozen springs that manifest as small fountains spitting out mineral-rich water that is typically heated to between 130 and 160 degrees by underground volcanic activity. People regularly stop by the fountains to fill up small, specially designed porcelain cups, or even small Thermos bottles, and then they either rest on nearby benches, sipping their water while people-watching, or they stroll the riverside promenade to sip and people-watch. (You’ll find the porcelain cups, designed with a built in “straw,” just about everywhere you look.)

You’ll also find a plentitude of spa-hotels offering scores of treatments ranging from hydro-therapy sessions, to carbon dioxide baths, to various physician-assisted procedures that attack all manner of internal ailments.

“Once you’ve had your fill of thermal treatments, Instagram-worthy panoramic views await.”

One of the classic spa-hotels is Grandhotel Pupp, founded in 1701. It’s a huge, elegant, imperial palace of a hotel near the end of the promenade with picturesque views back down the Tepla River and into the city and hills beyond. Also high atop the list of great hotels: Quisisana Palace, Savoy Westend, and, well, just too many to name.

Once you’ve had your fill of thermal treatments, you’ll find Instagram-worthy panoramic views from several lookout towers nearby. One of the best is Diana Observation Tower, completed in 1914, and which you can reach by way of a funicular departing from a spot just behind Grandhotel Pupp. When you get hungry, an abundance of options await. Le Marche offers great high-end dining. Goethe’s Beer House (named for the German poet who regularly visited Karlovy Vary late in life and, at 74, fell in love with a 19-year-old local girl) plates up excellent mid-priced Czech specialties.

7 Czech Towns You Should Visit Besides Prague

24 Hours in Prague: Things to Do and See