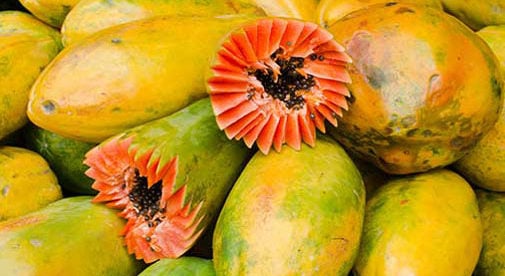 Sunny days in Panama are made for tropical treats. Rum-laced cocktails sipped from swinging hammocks…fried fish and cold beer on a pristine beach…lantern-lit dinners of fresh ceviche (a seafood dish typically cured in citrus juices) with mango or passionfruit…the choice is yours, and there’s much to choose from.

Panama is perhaps best known for its seafood, and you’ll find a huge variety here. Panama exports everything from shrimp to cobia from open-ocean fish farms. In fact, the very name Panama is thought by many to have come from an indigenous word for “abundance of fish.” Lobster, clams, red snapper, or dorado…the waters around Panama are rich with bounty.

Corvina is Panama’s most popular fish. Light and flaky, like sea bass, you’ll find it in on nearly every menu in Panama. It’s most often served al ajillo, or grilled with garlic and butter.

Though seafood is king among proteins here, you will of course also find plenty of beef and chicken dishes on menus here. You may be surprised to hear that thinly pounded beef sautéed with onions is a typical breakfast dish. For lunch, many a local will tell you there’s nothing better than a Panamanian tamal stuffed with chicken. Similar to Mexican tamales, these pillow-shaped bundles are made of steamed corn wrapped in banana leaves.

Yuca, potatoes, and other tubers you may never have seen or heard of before are widely consumed in Panama. (The latter include a purplish potato-like root called otoe and a somewhat slimy tuber called ñame.)

Popular at birthdays and other celebrations, arroz con pollo is a meal unto itself, featuring rice cooked with chicken and olives. My favorite is coconut rice—with or without pigeon peas, this subtle dish is more commonly found on Panama’s Caribbean coast. (You’ll also find great hot sauce here—but note that outside of the Caribbean region, most Panamanians do not eat spicy food.)

Panamanians love their fruit and vegetables, too, and these days vegans and vegetarians alike will find much to enjoy. A typical Panamanian lunch will include not just meat and rice, but also saucy beans or lentils, plantains, and a bit of salad.

Plantains look like bananas but are typically larger and starchier. Green plantains can be sliced, smashed, and fried to make patacones—as popular a side dish as French fries in the States. Ripe or yellow plantains can be pan-fried and served as a sweet and salty side dish or baked to gooey goodness with brown sugar and cinnamon. (If you typically make candied yams at Thanksgiving, maybe try candied plantains this year, instead)

Another starchy fruit that’s consumed as a savory treat here is pixbae, or palm fruit. It packs a nutritional punch, with a pixbae the size of a plum averaging less than 200 calories and containing several vitamins. Once cooked, its texture and appearance is like a cross between yuca and sweet potatoes. It can be eaten as a snack or added to salads, croquettes, soups, and more.

It’s hard to resist the fragrant mangos, papayas, pineapple, and bananas that grow all over Panama. Walk into any market—they are plentiful here—and you’ll see mounds of colorful produce.

In Panama fresh fruit and vegetables can be more accessible than fast food. There are many small stalls and vendors…along the side of the PanAmerican Highway or sold on the capital’s busy streets. You can sometimes roll down your car window and buy tomatoes, limes, avocado and more, it’s actually faster and cheaper than a wait at a McDonald’s drive-in. 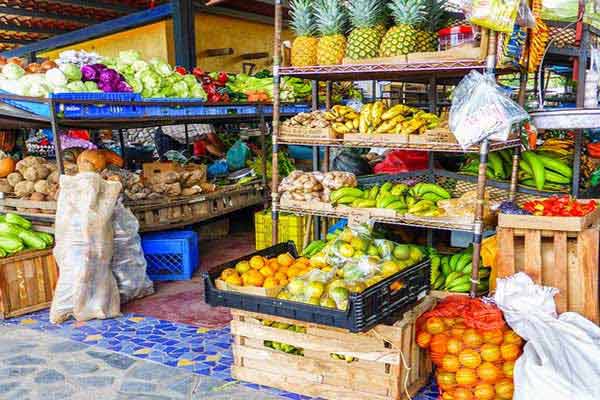 You’ll see local fruit featured in plenty of sweet dishes in Panama. Green papaya and coconut is used in the Azuero region to make a sweet called cabanga, a word that also translates to the feeling you get when you’re feeling nostalgic, homesick, or even lovesick.

Cashews are another delicious crop grown in Panama. The nuts are traditionally roasted over an open fire and can be purchased salted or unsalted. They’re also used to make a sweet called cocada, little balls made with coconut and sugar cane syrup. (This is my favorite Panamanian sweet.)

Panama’s most popular sweet, however, is probably the huevito de leche or “little milk egg.” These round balls are simply sweetened milk that’s been condensed and dried, then rolled into little balls the size of marbles and wrapped in colorful tissue paper.

Of course, no Panamanian get-together would be complete without drinks. Panama’s Ron Abuelo rum has won gold medals from the likes of the World Spirits Competition. Enjoy with cola and fresh lime for a Panamanian-style cuba libre.

Vodka lovers may prefer Panama’s original spirit, Seco Herrerano, which is strong stuff, triple-distilled from sugar cane. It can be mixed with tonic or cranberry juice…pretty much anything you’d normally take with vodka.

Most visitors start out their trips here with a cerveza Panamá. Panama’s inexpensive lagers include the Panama, Atlas, and Balboa brands. They tend to be light and just right for sunny days at the beach. That said, this country is also coming into its own as a destination for beer connoisseurs. Microbrews are available at the likes of Istmo Brewpub or the Rana Dorada, while craft beers are made and bottled here by companies like Casa Bruja Brewing Co. and Cervecería Central.

Of course, not all Panamanian drinks are alcoholic. Chicheme is popular in the countryside and made from sweet corn of all things (it’s best served ice cold). Chicha de tamarindo, a tangy tamarind drink, is as satisfying as lemonade on a hot day…and it’s even better when frozen into popsicle form. Speaking of lemonade—if you get a chance, try it with raspadura, which is honey-colored reduced sugar cane juice.

Another traditional “health drink” is juice made from nance—pronounced NAN-say—a small orange fruit the size of a grape. This tart drink is an acquired taste, so Panamanians will sometimes offer it just for the fun of watching you grimace.

That said, I highly recommend cheesecake made with nance or traditional pesada de nance, a heavy custard often served with crumbled farmer’s cheese on top. El Trapiche restaurant in Panama City usually has these desserts on the menu. Just be sure to enjoy them with a cup of Panama’s award-winning coffee. That’s the potent potable Panama is best known for.