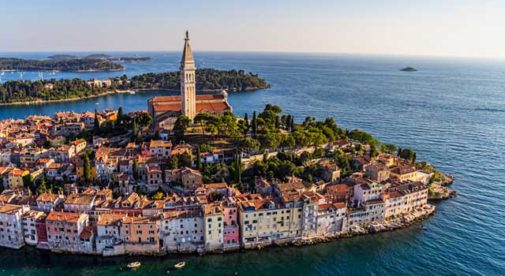 Yes, it’s true, the charms of coastal Croatia aren’t much of a secret any more. After all, this is a country that averages a higher percentage of annual tourists per local population than any other nation on earth—close to 20 million visitors a year.

But here’s the good news: if you avoid the peak months of July and August, you can still find plenty of quiet, charming places to hang out and enjoy the sunny charms, breathtaking scenery, and friendly people of Croatia. There’s a whole lot more to this part of the world than just Dubrovnik, Zagreb, Split, and ‘party islands’ like Hvar. If you take the time to venture further from the well-worn tourist track, it’s amazing how many beautiful places you’ll discover. For me, one of the best under-the-radar spots is Rovinj.

Rovinj (pronounced Roveen by the locals) is a small, picturesque fishing port situated along the western coast of the Istrian Peninsula in Croatia’s north. Although it feels thoroughly relaxed and far removed from the bustle of better-known destinations, it’s quite accessible to popular European hotspots: both Venice and Ljubljana are less than three hours away by road, with one-way bus prices starting at around $16.

The first thing you’ll notice about Rovinj is how clean, neat, and well-kept it is.

There’s virtually no graffiti here (a rarity in so much of Europe) and the locals take pride in keeping the whole area in immaculate condition.

It’s an ideal town for leisurely strolling, with views of the blue Adriatic around every corner and a profusion of narrow, cobblestoned streets leading to tiny squares, mini-promenades, and cozy cafes where local seafood rules.

The old town is compact, inviting, and a great place to get lost on purpose. Passing through stone archways framed by flowering bougainvillea, you’ll head uphill to arrive at the town’s centerpiece—the Church of St. Euphemia. Towering high above everything else is the bell tower, boasting a spectacular view that’s reached by huffing and puffing up 192 creaky wooden steps to a breezy lookout.

Because the Istrian Peninsula is less visited than the Dalmatian Coast, Rovinj isn’t overrun with the large crowds found in other parts of Croatia, even in mid-summer. It’s not a bad winter destination, either: sunny days are common and daytime temperatures tend to hover around 50 to 54 F. It’s like a fairy-tale town over Christmas, with traditional holiday festivals, ice skating, concerts, midnight fireworks, and more.

Personally, I feel April/May and September/October are the best times to visit Rovinj. There’s perfect weather, fewer tourists, and lower prices than you’ll find in the height of summer. Just be aware that some attractions and restaurants close down over the November to April period. 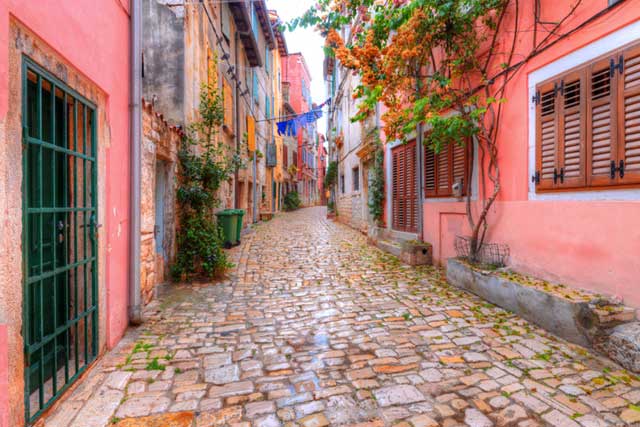 Despite its small size (around 14,000 permanent residents), Rovinj offers plenty of things to see and do. Here are just a few of the best:

Because Croatia has close ties with its neighbors across the Adriatic, there’s an Italian flavor to the food scene in Rovinj, with cured salami, prosciutto, pizza, local cheeses, and oven-baked dishes featuring heavily. The real stand-out here is the fresh seafood—it’s as good as you’ll find anywhere in the country. The options are truly dazzling: grilled shrimp, sea bass, seafood pasta with truffles and asparagus, marinated swordfish, black risotto with octopus, broiled lobster, and cod in white wine are just a few dishes to try.

If you’re after cheap, simple fare, check out some of the smaller cafes, pizzerias and beer gardens away from the tourist center, where you can enjoy a filling two-course lunch for around $11, including the house wine. The fresh seafood platter at Konoba El Niro restaurant is hard to beat if you’re keen to sample some of the local catch. Afterwards, make your way to Chocolat for some of the finest gelato in Europe.

Laze on the Beach –

Between May and late September, water temperatures around Rovinj average a pleasant 75 F, and the beaches north and south of town are lovely. Expect more small pebbles and rocky coves than sandy stretches, however. Mixed in with all the natural shorelines are some interesting man-made coastal rock pools, paved sunbathing areas and family-friendly beaches complete with showers, boat rentals, beach bars, lifeguards, and kids’ play areas.

If you’re staying in the old town, a quick walk will take you to Balota Beach, right below the main church. Here, not far from the main square, you can lounge on large, flat stone ledges above the steep, rocky shore (for experienced swimmers only). And from pretty Amarin beach, north of town, you can get a boat across to one of the islands or take a walk along the coast to Saline Bay or Cape Cross.

Surrounded by a lush nature reserve, the calm, clear waters of Zlatni Rt Beach offer excellent swimming and snorkeling and in the reserve itself, you can hike through forested meadows. There’s even a free rock-climbing area in a nearby quarry.

Shop at the Farmer’s Market –

Every morning in Rovinj, the Farmer’s Market comes alive with local vendors and shoppers keen to find the best bargains on fresh produce, meat, seafood, and regional products including soft cheese, olive oil, Istrian wine, and hand-made lavender soap. Bring cash (Croatian currency is called ‘kuna’; 10 kuna equals $0.15 USD) and get there well before 10 a.m. The markets are close to Valdibora square in the old town.

In season, the fresh fruit and veg is cheap and plentiful and you’ll also get a good deal on truffle oil and porcini mushrooms. If you’re staying in an apartment, you’ll save loads of money by shopping for fresh goodies here each day and cooking for yourself instead of relying on restaurant meals each night.

Hop on a Boat and See the Sights –

Rovinj is surrounded by water and provides access to more than a dozen beautiful offshore islands and a selection of ‘secret’ beaches. Seeing this area by boat is one of the best ways to experience its beauty whether your aim is snorkeling, seeking out hidden coves, dolphin-spotting, or sipping wine as the sun sets over the railing.

If your travels take you north to the town of Porec, sample a sea kayaking tour along one of Croatia’s most stunning coastal features—the fjord-like Lim Channel, which snakes up the Lim Valley for more than six miles. Other cruises include parasailing adventures and there’s even a full-day trip from Rovinj to Venice by high-speed catamaran (it’s only 68 miles away by sea).

Although the bus system around Rovinj is reliable and there are a range of interesting day-trip tour options available, you can explore the region more freely by hiring a car and heading out on your own. Both Pula and Porec are only 45 minutes away, or you could drive 50 miles north to scenic Piran in an hour and a quarter (not including the border crossing time into Slovenia). Another pleasant option is to take the coastal road to the east toward Rijeka.

This lets you see parts of northern Croatia that few tourists ever visit, stopping at pretty spots along the way at your own pace.

Hire car costs in Rovinj are reasonable—$45 a day is average.

Road quality varies but is generally acceptable; the biggest problem is keeping your eyes on the road while all that eye-popping natural scenery flies past. Because Croatia is one of Europe’s least urbanized nations, it’s a real pleasure to drive through. I consider the journey between Rovinj and Zadar, for example, to be one of the most spectacular road trips on the planet. 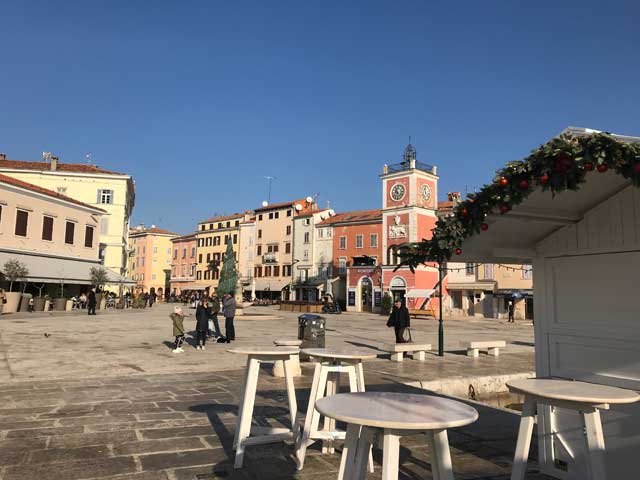 Rovinj (and the region that surrounds it) is not the sort of place you’ll want to rush through. It may be quieter than other parts of Croatia but it’s never boring. Many visitors even decide this is their favorite part of the whole country. Rovinj has an intimate, friendly feel that oozes relaxed livability.

Croatians are justifiably proud of their country, and you’ll make some great friends here if you spend the time and try to live like a local. Make your way down to a seaside bar at dusk for the view and some instant socializing—you can’t go wrong.

Accommodation costs in Rovinj depend more on the time of year than anything else—in the summer, prices go up and choices can be more limited. During shoulder season, it’s not hard to find a decent Airbnb apartment in the heart of the old town for less than $50 a night. Rovinj is super-compact: everything you’ll need, from cafes and gyms to supermarkets, is always within easy walking distance.

There are several ways to get to Croatia from the U.S. I flew into Rome and then entered the country by bus, east of Venice. And once I crossed the border, I immediately noticed how much cheaper my living costs became on the Croatian side…. 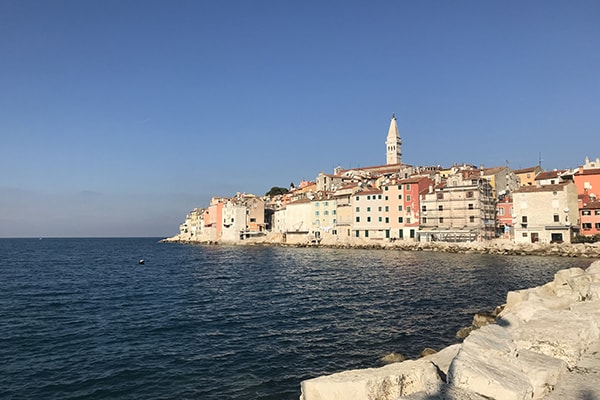 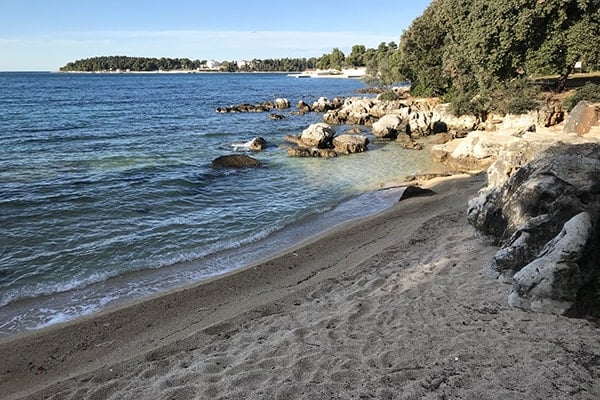 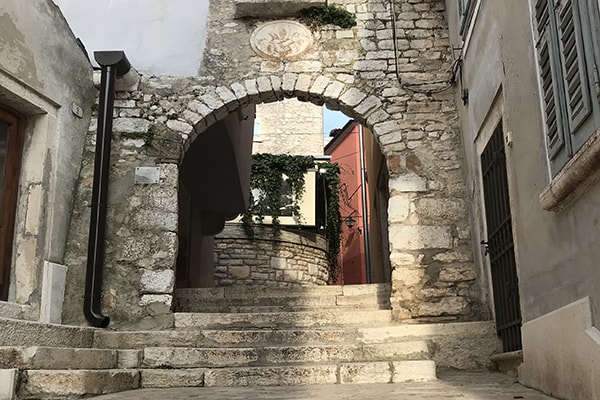 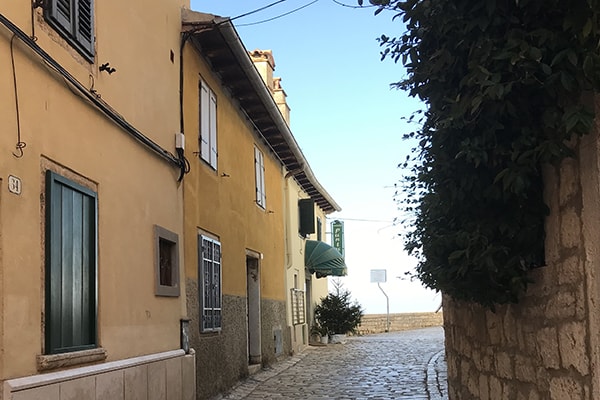 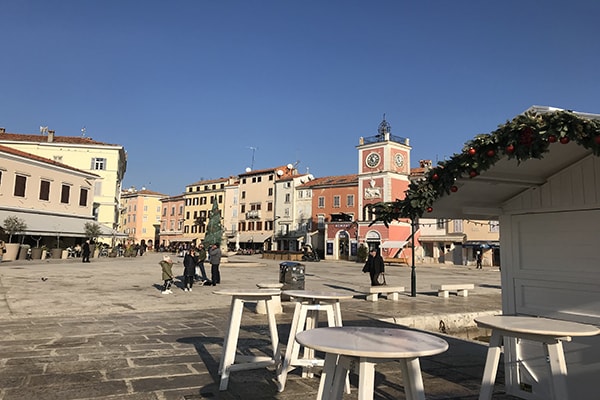 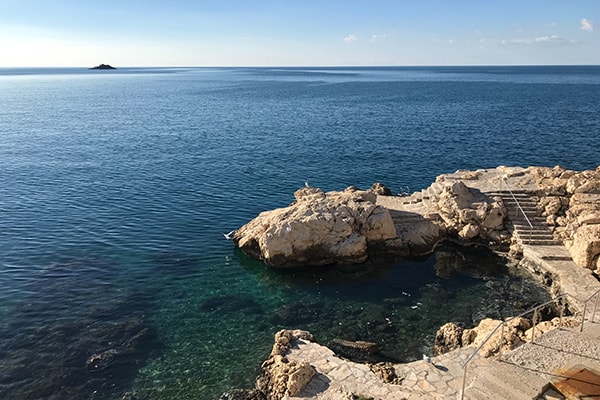 <
►
>
Rovinj juts out on a small peninsula in the Adriatic —it's completely surrounded by water.