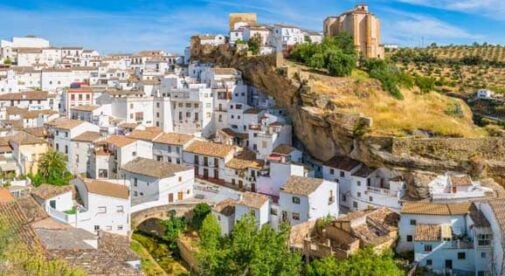 A row of whitewashed dwellings seems almost minuscule beneath the weighty rocky overhang above. Here the colossal cliffside meets the sky, creating a natural shadow, and delightful protection from the hot, mid-day sun.

Imagine living in a cave dwelling from prehistoric times as you stroll through this quaint little village. Pop inside one of the shops or restaurants and have a look around. Examine the ceilings for blotches of black soot, evidence that suggests prehistoric humans once used fire to cook and heat these ancient marvels.

According to the legend, this once-fortified Moorish town took its name from the Roman words “septem nihil,” a phrase that means “seven times nothing,” referring to it being captured by the Christians after seven sieges.

Proof of human existence in the village dates back to Roman times in the 1st century AD. But other cave-dwelling communities nearby show signs of life dating back 25,000 years, so it is quite possible that Setenil de las Bodegas existed that far back also.

The village today is a tourist hub known for its meat products like sausage and pork from pigs raised in the surrounding hills. Sardines, shrimp, and octopus, along with beef, grace most local restaurant menus to satisfy almost every palate. Vegetarians will find plenty of salad options since the verdant area grows an abundance of fruits and vegetables to supply neighboring towns and cities.

Meander along the cobbled lane called Calle de las Cuevas that sits in the shadow of the outcropping. Browse the tourist shops, inhale the deliciousness of traditional Spanish gastronomy, or admire the 12th-century castle on the other side of the river.

Village life is slow and laidback, reminiscent of a siesta in the making. A brown and white speckled dog lies lazily in the doorway of a home, seemingly oblivious to the hoards of tourists passing by. Perhaps he’s hoping for a scrap of food to be dropped or tossed his way? Above a local woman hangs outside an opened window, cautiously hanging her wash on tightly woven ropes that are suspended parallel to the rugged cliffside. Dressed all in black a waitress scurries by bringing menus to hungry tourists who wait patiently at a nearby eatery.

This tiny village is home to just 3,000 locals yet boasts of having five churches and a 12th-century castle with a panoramic view of breathtaking scenery. Cross the bridge to the other side of the gorge for access to the Arab castle. Originally the castle had 40 towers yet only one remains today. Visitors can climb the tower for a bird’s-eye view overlooking the adorable little village.

The town’s most popular church is Our Lady of the Incarnation which was built on the site of a former mosque. Inside, the church is simple yet elegant with pure white walls, a domed ceiling, and a 17th-century crucifix above the main altar.

When hunger calls pull up a chair at one of the many riverside restaurants to sample some delicious dishes of the region. A hearty soup meal called sopa cortijera is packed with wild asparagus, hard-boiled eggs, sausage, spices, and served with rustic bread to fill you up. Or opt for a tray of cold meats and cheeses or some of the local pork cooked to perfection. Another specialty, asparagus revueltos, includes wild asparagus, bread cubes, sausage, eggs, spices, and olive oil. Sweet potato mixed with honey and served with rice is another treat that many enjoy along with some famous Spanish wines.

To satisfy your sweet tooth, try one or many of the delectable Spanish desserts. Churros dipped in chocolate or other fried bread specialties topped with cinnamon and sugar are a local favorite. Flan, a dessert made with cream, sugar, and eggs, can be found on most menus too. Cookies, candy, and donuts abound in most bakeries, which pair perfectly with a hot cup of chocolate or cappuccino. Chill out a while and watch as life goes by.

Because Setenil de las Bodegas is just a 30-minute drive from Ronda, another tourist hotspot, many tourists combine the two locations, along with other white villages along the route.

For anyone who has developed an affection for this alluring pueblo and longs to invest in a fixer-upper, currently on the market is this rustic ruin in need of renovating. This townhouse sits in the center of town and allows for a tourist license. It offers two bedrooms, two bathrooms over two floors covering just over 1,000 square feet and can be purchased for $104,000.

Or if renting for a while is more your style, here is what you could expect to find in the center of the village. This three-bedroom, two-bath townhome features rustic wood-beamed ceilings, rocky accents, and is spread out over two levels for $413 a month.

Visitors will hit the road to delve into the next white village or board a flight back home, but the allure of the Andalusian mountainside will be etched in their hearts and minds for years to come.