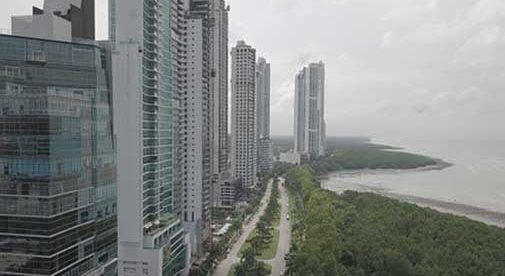 If you like the idea of living close to big city comforts and an international airport, then you’ll want to take a closer look at Costa del Este, Panama.

East of Panama City’s San Francisco sector you’ll find new developments with much to offer…all of them between the vibrant city center and Tocumen International Airport. The largest and most convenient of these, Costa del Este, is favored by well-heeled Panamanians. The majority of these are white-collar types who speak English.

In North American expat circles, Costa del Este remains something of a well-kept secret. Though it can be more expensive to buy here than elsewhere in Panama City, condo rentals tend to offer excellent value. Many of them have ocean views, and buildings tend to have gyms, pools, and social areas.

Is Costa del Este right for you? Here are seven reasons why you may want to check out this modern, master-planned community:

1. Proximity to the airport: Tocumen International Airport is known as the “Hub of the Americas,” and with good reason. The airport has expanded into the busiest in the region, with a brand-new terminal slated for completion in the coming year. Tocumen frequently wins awards for best airport in Central America. It’s the hub for Copa Airlines, which is also frequently ranked as the number one airline in the region.Copa has aggressively expanded its offering of non-stop flights, helping turn Tocumen into the powerhouse it is today. These days you can hop on direct flights from Panama City to just about anywhere, including Boston, San Francisco, Chicago, Montreal, Toronto, Madrid, and Paris, to name just a few. Just under nine miles from Tocumen, Costa del Este is convenient to the airport without being too close.

2. Urban planning at its best: Costa del Este has long been known as the only urban-planned neighborhood in Panama City. There are quite a few other neighborhoods in the capital that exhibit certain degrees of planning. Areas like Obarrio, Bella Vista, and El Cangrejo have recently gotten new sidewalks and green areas to enhance their modern urban appeal. Costa del Este, however, was designed and built in accordance with an elaborate master plan. People who live in Costa del Este often say it reminds them of Florida, with palm trees, views of the ocean, broad avenues, and good sidewalks, a rarity in many city areas.

3. Modern amenities: There are new strip malls in Costa del Este where you can find cafés, shops, banks, pharmacies, and more. There’s also an industrial park and office sector where many of Costa del Este’s executives work. Pretty much anything you could possibly need is available here, including an upscale Riba Smith. One of the best-stocked supermarket chains in the region, Riba Smith carries a wide selection of imports from the U.S. and other countries, as well as regional products and produce. Source fancy cheeses, excellent wines, and anything else on your grocery list.

4. Green and walkable: You won’t need a car here. Most of the apartment buildings in Costa del Este are walking distance from parks, restaurants, and shops. With wide avenues and ample sidewalks, Costa del Este is pleasant to walk. The community is home to a large central park, and a bayside promenade known as the Paseo del Mar is frequented by joggers, cyclists, and more.

5. Growing nightlife options: When Costa del Este’s first residents moved in, there was zero nightlife here. Many of the first cafés closed early, catering more to the business crowd than to residents. All that has changed, however. Eateries run the gamut, from pizzerias to…yes…Starbucks. These days you don’t need to leave Costa del Este to have a nice night out. There are over a dozen dinner and drinks options, including pub and microbrewery Rana Dorada and upscale gastrobar Bottle Alley.

6. Close to shopping, entertainment, and more: Shopping options in Costa del Este include small malls or plazas like Atrio Mall (also home to a movie theater) and the Town Center. The city’s most popular mall, Multiplaza, is just five miles away. The Atlapa convention center is even closer. Here you can attend fairs, festivals, and shows. Ballet, opera, the symphony—you name it, Atlapa has hosted it.

In Costa del Este you’ll also find a Novey. This local “home improvement” chain offers everything from paint and gardening supplies to electrical appliances. There are even clinics, drugstores, schools, a church, a Westin hotel, and a pet supply store…there isn’t much you won’t find in Costa del Este today.

7.  New hotel with golf course nearby: The new luxury development of Santa Maria, less than 10 minutes away by car, is home to a luxury housing development and a five-star “urban resort” branded by Marriott’s The Luxury Collection. Here you’ll find a Championship Nicklaus Design golf course (18-holes, 72-par). You can book a stay and play, put up family members, or just enjoy a gourmet dinner and cocktails at Mestizo restaurant. If you really like Santa Maria, you may want to buy or rent here, instead. You’ll still be close to all of Costa del Este’s great amenities and the airport is only about seven miles away.