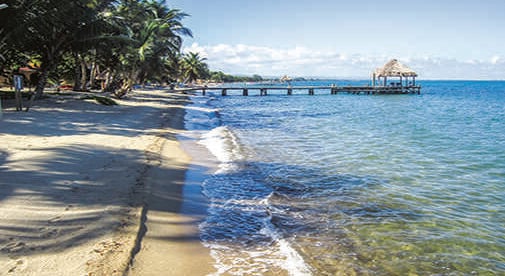 Moving to the welcoming beaches of Belize needn’t cost the earth, or your citizenship.

Americans don’t have to give up their citizenship to live overseas. But some do. Should you? Legally, the term is “expatriate.” (In expat circles, to “expatriate” is the process of leaving your home country to live in another, regardless of the legal way in which you do it. However, in this article, I will specifically use the term to refer to the legal process of giving up U.S. citizenship.)

The problem for Americans living in another country is that they must continue paying tax on their worldwide income. Merely departing the United States isn’t enough to end worldwide taxation, because U.S. citizens are taxed no matter where they reside. To expatriate, a U.S. citizen needs not only to abandon U.S. residence, but also give up U.S. citizenship. (The only other country that taxes its non-resident citizens is Eritrea.)

In recent years, the number of Americans who have expatriated has risen sharply. While only a few hundred Americans expatriated annually in the first decade of the 2000s, a whopping 6,705 gave up their citizenship and passport in 2020.

Why expatriate? For the approximately nine million Americans living abroad, a big reason is the burden of being subject to tax in two different countries. They also have extensive IRS reporting obligations on their worldwide income and assets. What’s more, U.S. citizens often find it difficult to carry on daily life, as some banks, insurance companies, mortgage brokers, etc., refuse to deal with U.S. citizens at all.

U.S. citizens are taxed no matter where they reside.

In one case, a client of The Nestmann Group (my firm) living in Germany received a letter from the bank that had issued a mortgage years earlier for her home. The letter threatened to cancel her mortgage unless she could prove she was no longer a U.S. citizen. Rather than face a huge balloon payment, she gave up her citizenship.

Americans living in the United States don’t face this burden. And that fact illustrates the first important nuance of expatriation: unless you’re already living overseas permanently, or plan to do so once you expatriate, it’s not an option to seriously consider.

But if you live abroad full-time and are facing double taxation or difficulties in banking or other facets of day-to-day life, expatriation might be appropriate. Or it might not be. This article provides some guidelines to consider if it’s the right solution for you.

A 2008 law imposes an “exit tax” on “covered expatriates” (defined below), which applies to both U.S. citizens and long-term residents—green card holders who have lived in the United States for eight or more of the 15 years prior to expatriation. These rules don’t apply if you were a dual citizen at birth or if you expatriate before you turn 18 1/2.

The exit tax is based on a legal fiction that you sell all of your worldwide property at its fair market value on the day before you expatriate. Gains are calculated mark-to-market; i.e., the difference between the market value at the time of expatriation and the market value at acquisition. Unrealized gains are adjusted by any unrealized losses.

Tax on the fictional gain is payable at the time your tax return is due for the year of expatriation. You can defer payment by posting acceptable security with the Treasury Department and paying an interest charge on the amount deferred.

Only individuals defined as “covered expatriates” are potentially subject to the exit tax. You’re in this category if you:

The exit tax is calculated on Form 8854, which you file with your final tax return after you expatriate. Even if you’re not subject to the exit tax or aren’t a covered expatriate, you still must file Form 8854 to certify that you were compliant with all U.S. tax and reporting obligations for the five years preceding your expatriation. Failure to do so makes you a covered expatriate, even if you don’t otherwise meet the tax liability or net worth thresholds. There is also a $10,000 fine for failing to file Form 8854.

If you’re a covered expatriate, there’s one final insult to consider—when you die. If there are any beneficiaries of your estate who are U.S. citizens or permanent residents, they’ll need to pay a tax of 40% on any bequest they receive amounting to more than $15,000 per year.

Distributions from pensions or deferred compensation plans to non-U.S. persons— i.e., individuals who are neither U.S. citizens nor permanent residents— are taxed very differently than similar payments to U.S. persons. In most cases, they’re subject to a 30% withholding tax. Social Security benefits are withheld at a flat rate of 25.5%.

These withholding taxes can only be recovered under the provisions of a tax treaty in effect with the country where you now reside. But if you’re a covered expatriate, you can’t use the treaty to reduce this withholding tax. You could be forced to pay tax twice—once in the country where you reside, plus the 30% tax imposed by the U.S. The total tax could easily exceed 50%.

Non-covered expatriates can use tax treaties to reduce the burden of these withholding taxes. But if you live in a country without a tax treaty with the United States and have U.S. source income, you could still be worse off expatriating than if you remained a U.S. citizen.

Consider Janeen, a client living in Panama. She came to my firm in 2017 inquiring about whether she should expatriate. All of Janeen’s income came from U.S. sources. She received a Social Security payment of $18,000 per year and a teacher’s pension of $12,000 per year. Because her income was relatively low, and her Social Security benefits were mostly non-taxable, she generally paid no federal tax.

Janeen was shocked when I explained that she would have a much higher tax burden after expatriation due to the withholding taxes on her Social Security and pension benefits. Since Janeen wasn’t a covered expatriate, the taxes could be reduced under the terms of a tax treaty. However, there’s no tax treaty between the United States and Panama. Janeen’s tax liability would have increased from zero to more than $8,000 per year if she’d expatriated.

The United States is in some respects a tax haven.

There are a lot of Janeens living overseas who think they’d be better off expatriating. They might be, but only if they can shift their income sources to another country. In the case of Social Security and pension benefits, of course—they can’t.

But there are tax advantages to consider as well. Expatriates, along with all other non-resident aliens, benefit from the fact that the United States is in some respects a tax haven. Most capital gains not associated with a U.S. trade or business are tax-free. So are interest payments from U.S. banks, insurance companies, and Uncle Sam.

And of course, once you expatriate, your non-U.S. source income is no longer subject to tax. Nor do you need to file U.S. tax or information returns, unless you have a U.S. trade or business, or you have U.S. income on which the tax liability wasn’t satisfied by withholding.

But beware: when a non-resident alien dies, most assets they held in the United States valued at $60,000 or more are subject to estate tax. For U.S. persons, that threshold is much higher: $11.7 million.

…And Don’t Come Back!

An often-overlooked nuance to expatriation is that you might not be able to ever return to the United States, even to visit. You’ll need a visa to re-enter the United States unless you have a passport from a visa waiver country.

The visa application process requires that you visit a U.S. consulate for a personal interview. Consular officers are required to assume that applicants for visitors’ visas are lying about their intention to leave the United States after their temporary stay. The burden of proof is on you to demonstrate that you will return to your home country. Any remaining ties to the United States make it more difficult to establish that intent.

Expatriated U.S. citizens must overcome an even higher burden of proof to acquire a visitor’s visa than other nonresident aliens. In 1996, Congress gave the Attorney General discretion to deny re-entry into the United States to former U.S. citizens who give up citizenship in order to avoid taxation.

Regulations to enforce this provision were never issued, nor has its authority ever officially been invoked. However, some U.S. consular officials have denied visa applications from former U.S. citizens, using the amendment as legal authority for doing so.

Expatriation is a big decision. If you expect income from a U.S. source such as IRA or Social Security payments, it’s unlikely to be your best option. Plan accordingly.

Editor’s Note: For 30 years, Mark Nestmann has helped more than 15,000 customers and clients successfully protect their assets and financial privacy overseas. His work has been featured in The Washington Post, The New York Times, ABC News, and Forbes. He is also author of The Lifeboat Strategy, widely considered the gold standard in American-client asset protection and financial privacy resources. See: Nestmann.com/ilspecial for an exclusive offer for IL readers.