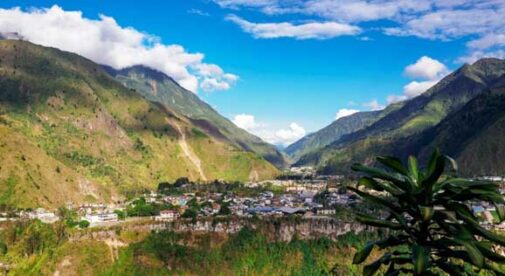 I’m on a bus in Ecuador, and I mention the cows as a nod to my colleagues in the International Living editorial department. Last year, when I returned to the office after a trip to Thailand, someone asked me what the highlight of my trip was. I thought about it for a moment, and blurted out that I’d caught a glimpse of a coal-black, showroom-glossy cow in the midst of a tropical forest. Before I could explain, the office erupted in laughter. Can’t have been much of a trip, someone suggested, if the highlight was a cow.

But it was a very pretty cow, I assure you. Context is key: I’d been riding a 125cc Honda scooter along the hill roads of Koh Phangan, feeling the rush of warm tropical air as I leaned the little contraption around the sweeping corners, trying to keep the silly grin on my face as minimal as possible (lest I got flies in my teeth).

You get the picture—you’ve probably seen it on a postcard or the montage section of a kickboxing movie—smiling children, orange-robed monks, the blue ribbon of smoke rising from a distant cooking fire. It’s all hardwired into our mental picture of a Thai island interior. I was surprised it still exists.

When I turned a corner and came upon the aforementioned cow, it felt that Southeast Asia was there, summed up, in this single beast. Doe-eyed, diminutive, and with a hump on its back, it was at once alien but familiar; domestic and yet exotic. So yes, the highlight of my Thai trip was a cow. Laugh all you like, I’m over it now.

Ecuador’s bovines are not inspiring me to the same rapture. They are part of a landscape that is more domestic than you’d expect from the high Andean plateau. I’m flanked by five-acre fields bordered with blue-green eucalyptus, unbroken ribbon development of single family homes, and frequent random clusters of the filling stations, motor shops, and food stalls that signal a village.

A curious feature of bus journeys here is that travelers are treated as a captive audience for pitches from ambulatory sales reps. Over the past hour, I’ve had the opportunity to buy ginseng, wireless headphones of dubious provenance, foil-wrapped cookies, and small tubs of fried rice with beef strips. I succumb to the fried rice. It’s good, although the ticket collector tells me off for lowering my facemask while I eat it. I spend the rest of the journey sneaking bites in when he’s not looking and feel like a schoolboy again.

I’m traveling south from Quito toward Ambato, and the straggling residential overflow from the capital city persists until the road branches off eastward into the Pastaza valley. That’s where the town of Baños de Agua Santa sits, snug in a hollow between snowcapped peaks. You have to remind yourself to look up—the mountain tops are so high, the angle so steep, that unless you remember to crane your neck back and gawp, you could forget they were there. A case of not seeing the mountains for the hills, to twist a metaphor.

These volcanic peaks have their uses; they’re the source of the town’s prosperity. Baños has a growing reputation as an adventure sports nexus, and there’s plenty of white-knuckle activity on offer, but on the approach to the valley floor, practically every home has arrays of seedlings, houseplants, and garden greens in neat rows out front, and every slope is terraced with well-tended crops. Tourists come and go, but everyone needs to eat.

I meet Jill Saré in a corner café that serves excellent coffee and herbal infusions in their own cute little teapots. Jill made good use of the topography too—she bought in the shadow of the Tungurahua volcano in 2003. At the time, the volcano was still active, but she was willing to gamble. She got a three-quarter acre lot with two houses on it for $50,000. Since then, the volcano’s been declared dormant and her property has doubled in value.

Jill’s an old hand in Ecuador, she first came in 1988, teaching at an international school in Quito and coming to Baños for weekends. She’s from Chicago originally, but got hooked on travel and expat life early on, moving around the world on the international school circuit. But as she puts it, “Ecuador kept calling me back. I choose to live here because it’s a place where people matter more than things.”

She’s embedded in the place now, and tells me about a lunch she hosted the previous week where her guests were 14 people from five different countries. Baños is a small town, but it’s well stocked. Jill spends between $80 and $120 a month on groceries (her total outlay, including internet and utilities, averages out at about $200, monthly). Nowadays, that includes delicacies like sundried tomatoes from the Supermaxi in town; portobello mushrooms and asparagus from the market; nuts, seeds, and healthfood from Aromé deli, as well as really good Chilean or Argentinian wines for $15 a bottle.

Although I doubt it’s Jill’s sort of thing, I feel duty-bound to mention that on the same leafy plaza as the town’s heavy stone basilica, the secret spice blend aromas of a KFC outlet make their presence known. I suspect that the expats of Baños slip in from time to time when the seeds and sundried tomato diet begins to pale.

A block away from the KFC, indigenous market traders in embroidered blouses and black felt fedoras try to tempt me with a slice of guinea pig, rows of the fat rodents browning nicely on spits over a charcoal grill. I split the difference in this culinary culture divide and opt for a hand-pressed cheeseburger in a restaurant decorated with Marvel Heroes murals. I can’t seem to keep away from the beef.

Days later, I’m entranced by another vision of cow. This time, it’s on an openair terrace in Vilcabamba. (To be more specific, it’s on a plate, sliced and encircled with puff pastry.) It’s a warm evening, and the creaking sound of cicadas fills the upper-mids of the soundscape while the throaty whoops of tropical birds decorate the bassline. I’ve arranged to meet Christy and Dan Kennedy, an expat couple who moved from Colorado in 2016 (partly inspired by what they read in International Living, no less). “We just didn’t want to live in a cold place any more,” Dan says.

“I did the initial exploration out here on my own,” Dan explains. “When I found Vilcabamba, Christy came out and spent two months here. We both went back to Colorado, sold the house, sold everything in the house, and moved here.”

Dan orders beef Wellington, medium rare, and gets exactly that delivered to our table. I’m astounded, my cow obsession finding another outlet. It seems like a remarkably sophisticated dish for a tiki-style restaurant in a village so rustic and earthy that the taxi service is provided by well-worn Japanese pickup trucks and the fenceposts sprout leaves.

“I didn’t really like it here at first,” Christy admits, turning the customary expat narrative on its head. “It was dry and dusty when I arrived, the worst part of the year. I missed our kids and grandchildren. It was tough. But the trick is to keep control of your expectations. You can’t come here and change the country. Some people try that and are disappointed. Ecuadorians do things their way. Accept that, and you’ll do far better here.”

Christy’s breakthrough was setting up her hair styling business. It was her job back in the States, and she’s transferred her skills to her new setting, working from home, with a client base that’s kept healthy by word-of-mouth referrals. It’s pretty clear that it’s about more than income. Independence, dignity, a sense of purpose—these needs are just as important as warm weather and low costs.

“It’s a passion,” Christy confirms. “And my clients are wonderful.” Dan agrees, and adds “It helps us meet people. We’re not really into going out much.”

Vilcabamba’s a curious little place. Only a couple of thousand residents, but with an expat population that supports a bunch of high-end stores. There’s the Belgian chocolatier, a French bakery, an Italian pizzeria, a German cheesemaker, a craft brewer; and a guy I met in the city of Loja (about a half-hour away) told me that he’s getting an electric bicycle made by a Vilcabamba-based craftsman.

All this in a village that fizzles out into forests, farmland, and country houses within a block of the central plaza. Then again, the population triples when weekenders make the trip down from Loja— Vilcabamba’s a year-round escape to chill by the pool and watch the date palms sway gently in the breeze. All the better with a freshly baked pain au chocolat.

Paying up after our chat, Dan’s beef Wellington came out at $9. A pint of really good craft beer cost $3.50. It’s hard in Ecuador to get any true sense of comparative value. In a country where you can get a three-course set lunch for $2.50, your brain does a little recoil when a single dish comes in at $9. In an international place like this one (El Carro Azul) with evening ambience and boho-cool furnishings, things cost more than at the workmanlike place in Cuenca where I enjoyed a wonderfully hearty slow-cooked stew for $3 (beef again. I’m sorry—it’s clearly a theme.) By North American standards, of course, $9 is a bargain for an evening meal at a hip spot.

Dan says it’s not just about prices, it’s about the slow culture too. “We went back to California for our daughter’s wedding, and we had a sort of reverse culture shock. Things are so abundant there, but people don’t realize it. When you come here first, you think you need to get a trucking or shipping company to bring all your things down here. But then you learn to live without them.” I wonder how well I’d survive without my espresso machine, my books, my records. Probably just fine, if I’m honest. “You make it up in other ways,” Dan says. The food here’s got no chemicals in it, no corn syrup or GMOs. Stress is gone. We’re paying $550 a month to rent a three-bedroom home.” When you put it that way, it explains why Vilcabamba has a reputation for long-lived residents. Take stress out of the equation, I figure, and we’ll all live longer.

Dan’s not finished listing the benefits, though: “The weather’s perfect, almost never above 90 F, or below 50. If there’s something you need that you can’t get in the village here, there’s always someone going to Loja who can pick it up for you.”

I reflect on that as I leave the village, back on another bus. Small-town life here has a lot going for it. Vilcabamba has its own hospital, for example. And a bus company with services to Loja every half-hour. All the beauty of the countryside, but none of the isolation of the boonies.

We round a corner to face the astonishing sight of blue domes rising out of sugarcane fields and banana groves—the parish church of Malacatos village—an exuberant confection of stucco, ceramic, and sheer opulence that looks like it’s been dropped into the jungle from 18th-century Seville. It’s South America in a single view: historic grandeur, robust nature, eye-watering color, and the resilience of time. I could be happy here. Maybe raise a few cows.