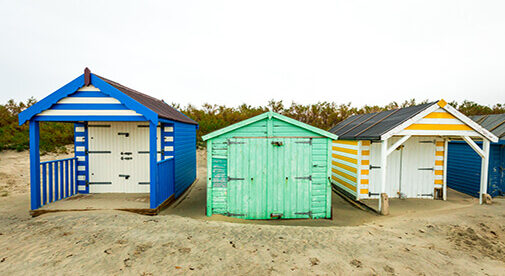 There's 161 of these beach huts in total. They're little more than a garden shed, built of wood, with a maximum size of 12 foot by eight foot.

This week, my senior researcher Margaret Summerfield has started a new leg of her hunt for a European home.

While the temperamental oceanic climate keeps this coastline under the radar for many international tourists, for Londoners and folks across the U.K. this is a justifiably popular destination.

And with London on the doorstep, it could make an ideal European base…if the price is right.

Life is Better at the Beach

I’ve switched from the French Riviera to England’s South Coast.

It’s a part of the world I know quite well. I lived there for almost 17 years.

Here’s a photo I took on my morning walk in West Wittering: 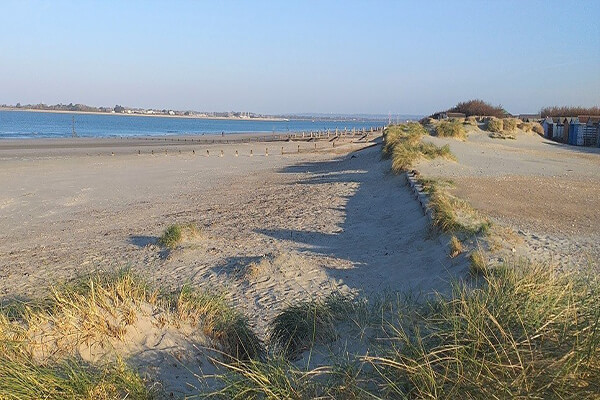 West Wittering is a seaside town in West Sussex. It’s packed in the summer months with day trippers and beachgoers. In the winter months, it’s slow and sedate.

It’s home to expensive, beachfront homes. And these beach huts…

There’s 161 of these beach huts in total. They’re little more than a garden shed, built of wood, with a maximum size of 12 foot by eight foot.

You can’t sleep in the huts overnight. You own the hut but not the land it sits on—it’s a leasehold arrangement. The leasehold fee is £445 ($615) a year. There’s also an annual fee for rates paid to the local council (municipality).

The huts would come in handy for storing beach chairs and any water sports gear. They give you some privacy for changing in and out of swimsuits, too.

But that doesn’t justify their crazy prices.

Seven of the huts are owned by a company that also owns the beach car park, West Wittering beach itself, and chunks of land around it. They rent them for an annual fee of £1,837 ($2,524) plus sales tax. That seems reasonable enough.

“Static” parks are also popular in this area. These are vacation trailer parks. Again, typically you can’t live in them as a full-time resident. You can use them during summer season and over the Christmas and Easter holidays. They are leasehold, where you own the trailer for a specific timeframe, but not the land the trailer sits on. They often come with rental restrictions, allowing only the owner and the owner’s family and friends to stay.

One such park advertised lodges for sale in Bracklesham Bay. My husband described them as fancy sheds, complete with wood siding. Of 11 plots, four were still for sale. They had a 50-year lease arrangement. Pricing started at £195,000 ($269,655).

The crazy pricing reflects the appeal of this beach zone. West Wittering has a wide, sandy beach with lifeguards in the summer, parking and toilets and a café. You can hire a deck chair or paddleboard, take a surf lesson, or birdwatch in the neighboring wetland preserve. At weekends, paddleboarders, kayakers, swimmers, and surfers take to the waves. Online reviews are skewed. For every person that loves the beach, there’s another giving it zero stars—because of the horrible traffic jams leading to and from the beach at peak times.

It’s a two-hour drive from London, so easy reach for folks looking for a weekend getaway or a second home. By train, it’s 90 minutes or so. That’s key, because many properties here are second homes. Kate Winslet has a home West Wittering—as does Keith Richards of the Rolling Stones.

We rented a three-bed townhome at Bracklesham Bay. Bracklesham is a mostly shingle beach. You can walk along it to Selsey in one direction and to West Wittering the other. Bracklesham’s famous for its fossils, which are found at low tide, especially after a storm. My husband found a fossilized shark’s tooth.

The three-bed townhome we rented was in a small beachfront complex. It was comfortable but needed a remodel…yet the out of season rental rates were £250 a night. With the craze for staycations, and lots of repeat/regular visitors, there was little choice available.

A two-bed condo in Bracklesham in a beachfront building, with 778 square feet of living space, is listed at £285,000 ($393,043). The living area has ocean views. The condo block is stairs-only, no elevator, there are no shared amenities and the block is frankly quite shabby. The condo and complex fees total around £3,200 ($4,413) a year. The condo is leasehold, too. [I’ll write in a future alert in more detail about leasehold laws in the UK.]

If you move away from the beach your budget will go a little further. Within a 5-minute walk of the beach, you can buy a three-bed single family home for £410,000 ($565,431). It’s got an updated interior and is move in ready. Another single-family home with four bedrooms is a little closer to the beach, only a 3-minute walk, but needs a makeover. It just sold (it was listed for £485,000).

Bottom line, this is a niche market with relatively limited supply and high demand. This is not uncommon in the UK. It often surprises people when they discover that the most expensive (per square foot) real estate in the UK isn’t in prime, central London, it’s in Sandbanks. Few people outside the UK have even heard of it.

Sandbanks is an exclusive beach neighborhood on a tiny peninsula in Poole Harbor in Dorset. It’s like a mini-Hamptons, a favorite with celebrities, sports stars and the super wealthy. In January this year, an empty plot of land in Sandbanks was listed at £6.25 million ($8.62 million). It came with planning permission for two homes, which would cost a million or so to build—and which could then sell for £6 million ($8.27 million) each. Properties currently listed for sale include a 3-bed 3-bath house for £4 million ($5.52 million) and a 4-bed 4-bath house for £6.5 million ($9 million). A three-bed condo with 1,351 square feet of internal space is listed at £1.395 million ($1.92 million).

That’s the power of limited supply of beachfront homes combined with high demand. It also puts some perspective on RETA deals in beachfront communities in other locations such as Playa Caracol in Panama. There, RETA members could buy a two-bed condo, fully furnished and equipped, with a rental management program, from as little as $144,200. Thanks to a tax bailout, the savings on these condos for members was a whopping $68,000. When delivered, the condos will be a short stroll from the beach and a host of resort-style amenities, in a tropical setting—where every day is beach day. That’s way cheaper than a trailer on a leasehold in the Wittering area.

Angelica says: Hi Ronan. Thanks for all of the deals you are bringing us RETA members. I was lucky enough to get in on the Pueblito deal in Panama, so I’m looking forward to that in a few years. I am also paying very close attention to your Portugal deals. I have actually been in touch with your contact regarding some past properties and even the newest property in Burgau (which I know is not a RETA deal, but one of their own amazing deals).

I’d love to snap up a property and take advantage of that amazing financing that Portugal offers, but the sizeable 20% down (even spread out over 12 months with some of their offers) is not an option until after I retire (in less than three years) and can tap into my retirement account. I was wondering if you foresee any future RETA deals in Portugal in the next few years? Do you have an opinion about the buyers’ market in the next two to three years? Lastly, have you come across any developers willing to accept down payment terms similar to what you negotiated in the Panama deals? (balloon payments and monthly payments combined). Just curious. My goal is to purchase something in Portugal, but if I have to wait until retirement funds are available, then so be it. But I’ll get there eventually! Thank you!

Ronan says: Hi Angelica, congrats on Pueblito. I bought in Playa Caracol in an earlier release…

Owning steps from a pristine beach, this close to a major global city, at the exclusive prices we’ve seen in our RETA deals was too good to pass up. I’m also looking forward to spending some time there, and making some serious income when I’m not.

Regarding Portuguese developer terms (payments spread out over a long construction period), well, unfortunately they don’t really exist in Europe. The reason being, build periods tend to be shorter. Banks have a bigger involvement in the industry in Europe, thus, terms tend to be more rigid.

I do anticipate RETA deals in Portugal over the next few years. But, it’s getting more and more difficult in our core blue chip places like Lagos. The market is strong, and as travel within Europe opens up, I expect this will accelerate. As these areas become maxed out, though, opportunity will open up elsewhere.

You should only buy when the time is right for you. There will always be opportunity somewhere! That’s the beauty of a broad global beat…

Another idea would be to buy a lot or a rundown property now, and hold off renovating until you can access retirement funds. One of my researchers has booked a flight to Portugal and will be scouting some of the hilltowns to the east, where you can get some serious bang-for-your-buck.

Stay tuned in the coming weeks… 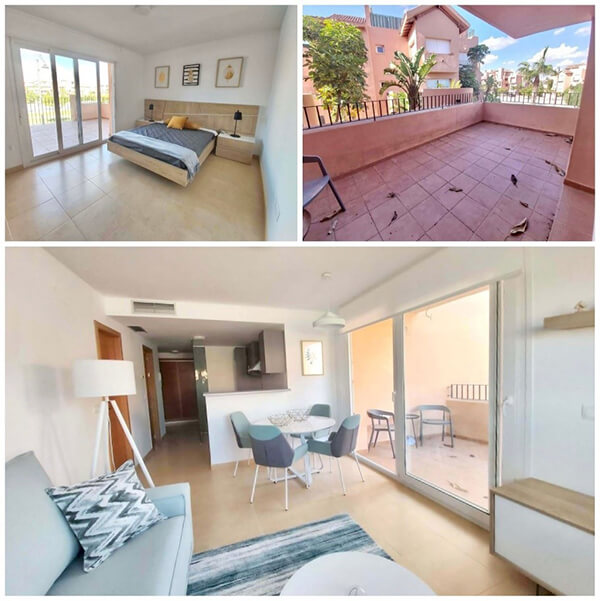 Located in the Mar Menor Golf Resort, today’s listing is a one-bed, one-bath condo. The living space is an open-plan kitchen, living, dining area with access to a balcony for outdoor dining in the Spanish sun. The bedroom also has access to a balcony area. You’ll have access to shared amenities such as the pool and gardens and there are also restaurants and cafes in the complex. And don’t forget the golf course! The beaches of Los Alcazares and the Mar Menor are just 10 minutes away.

Remember, we don’t make money from any listing shared here in the Your Daily Dream Home section. We have no dog in the fight. We’re just sharing cool properties we’ve found.
I haven’t visited this property or done due diligence on it. If you’re interested in the listing, you should hire an attorney and do your own due diligence.

The Best Deal in RETA History?