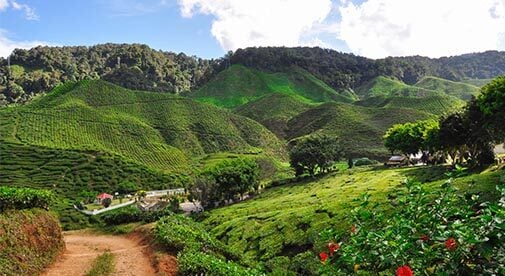 The romantic hill stations of the Indian sub-continent of the British Raj, which is how everyone remembers them, are high-altitude quintessential British hamlets, filled with country cottages, rose gardens, complete with white picket fences. In these far-flung places, it was the British re-creating what they missed most of all, home.

Used for recreation and enjoyment it was also where some of Malaysia’s British Governor’s built their grand mansions where they could govern from the coolness of the hills. There were fewer mosquitoes here too, so far less dangerous than the lowlands, where in the early colonial days people dropped dead like flies. No one back then knew that mosquitoes carried dengue, malaria, and chikungunya.

More importantly, the hill stations were used as a place of refuge, where the British could let their hair down out of sight of the natives, where they could party unseen, and where they would escape to because of the blistering heat of the lowlands.

Penang Hill, in the state of Penang, was the first of all the great British hill stations. Interestingly it wasn’t established for any of the reasons mentioned above, although that’s what it eventually became. In 1793 France declared war on Britain and a lookout point with a signal station to alert the citizens of George Town of an invading French fleet was essential.

Two retired British East India Company employees were offered the job and happily took up residence on what was soon to become the most popular hill station in Southeast Asia. Establishing a large flag pole for signaling George Town below, they also quickly cultivated a productive vegetable and fruit garden where they grew potatoes, strawberries, peaches, and apple trees.

The attractions and benefits of living on the hill soon became apparent to other settlers in George Town, and it wasn’t long before plots of land were cleared and offered for sale by the government. The summit’s cooler temperatures, breezes, and views attracted the island’s elite, and it wasn’t long before the Governor himself established a great mansion on the most prominent point, in 1800. “Bel Reterio”, is still the property of the Governor of Penang, and still sits proudly on Penang Hill some 220 years later.

The hill, as she is affectionately known to everyone who lives in Penang, hasn’t changed a great deal in over 200 years. There are hiking trails galore, waterfalls, a world-class vehicular railway, views to die for (you can even see the island of Langkawi, some 74 miles away, on a clear day), and numerous cafés and restaurants. And of course critters and flora in abundance! Macaque and Dusky Leaf monkeys inhabit the hill and can always be seen clambering about in the treetops, and tree monitor lizards, flying squirrels, eagles and kites, and numerous other bird species are always present.

If you like orchids, and who doesn’t, there is a lovely booklet titled, Orchids of Penang Hill, and if you want to read more about the hill, Penang Hill, A journey through time, is a fabulous read.

Fraser’s Hill, in the state of Pahang, was established in the 1880s and named after Lewis J. Fraser, its pioneering founder. There in the tiny mountainside village of Tras, he developed a lucrative tin mining business. Retiring in 1900 the hill was then abandoned, and it only re-opened in 1919 when the British decided to create a new hill resort.

Known internationally for its highland rainforest and extensive birdlife, it has established itself as one of the best, if not the best, bird watching site in Southeast Asia. There is an international birding competition that takes place here every year and it attracts birders from across the globe.

There are numerous hiking and walking paths, including the Pine Tree Trail and the Bishop Trail, sheltering rare migratory birds, and lots, and lots of leaches. The guides will also tell you that the jungles here hide the even rarer Malayan tiger, and although I have never met anyone who has seen one, they are shy and elusive, I have heard what I thought was one, or a pair of them roaring, in the deep forests. There are also numerous waterfalls, and Allan’s Water Lake, where you can hire paddleboats by the hour, and a lovely little 1900s stone church which conducts a Sunday service.

The village has a Scottish highland feel to it, and it’s a calm and relaxing spot with friendly locals. Infamously this is also where Sir Henry Gurney was assassinated on October 6, 1951, during the Malayan Emergency. There are some nice cafés here too, and the only thing that I think is missing is a bookshop. For further reading, Fraser’s Hill and Lewis J. Fraser of Singapore, is highly recommended, and, Birds of Fraser’s Hill and the Highlands of Peninsular Malaysia, is a must for all birders.

Maxwell Hill is located in the state of Perak. The first bungalow was established here in 1884 for the Resident-General of Perak, Sir Frank Athelstane Swettenham,

on a prominent point overlooking the valley below. An intently private man, this is where he selectively entertained friends away from the public eye. He was also an ardent naturalist and Maxwell Hill with its unique biodiversity would have given him everything that he wanted and needed.

This hill station is home to some 630 highland plant species as well as 28 different mammals, some 227 verities of birds, and at least 18 different reptiles. The area is also considered the wettest place in Malaysia due to its location receiving the highest amount of annual rainfall in Malaysia.

Access to Maxwell Hill is restricted to four-wheel drives and you can of course hike to the summit. It is also the place where the annual International Trail Running Association (ITRA), and the North Face Malaysia Mountain Trail Festival, is held. These events act as a qualifying event for the Ultra-Trail du Mont-Blanc (UTMB), a single-stage ultra-marathon that takes place in the French Alps. The area was named Maxwell Hill after the British Malaya administrator, George Maxwell.

The Cameron Highlands are in the state of Pahang, and most recently the subject of a Hollywood blockbuster movie, Garden of the Evening Mists, based on a fantastic book by Tan Twan Eng. A must-read for anyone visiting Malaysia.

Surveyed by the government geologist and explorer William Cameron in 1885, the hill consists of three sub districts and eight settlements. Developed in the 1930s, for expats living in Kuala Lumpur and Penang, and tin, rubber, and tea planters, the tableland is one of the oldest tourist spots in Malaysia. I remember visiting it with my parents when we lived in Malaysia in the early 1970s and it hasn’t changed a great deal since then.

The plateau itself is covered in tea estates and organic food farms, some of which supply most, if not all of the restaurants in neighboring Singapore, and is noted for its cool weather. There are numerous walking and hiking trails, waterfalls, rivers, a plethora of fauna and flora, and an Orang Asli settlement. The Orang Asli are the original, or aboriginal, people of Malaysia, and there are a few shops here that specialize in their unique handicrafts.

This is also where Jim Thompson, an American businessman who helped revitalize the Thai silk industry, disappeared on 26 March 1967, never to be heard of ever again. “Moonlight” bungalow, the bungalow that he always rented, can still be rented today.

The Genting Highlands, in the state of Perak, is an integrated modern development comprising of six hotels, shopping malls, theme parks, and a casino. This is a very commercial enterprise and doesn’t have the same colonial feel as any of the other hill stations in Malaysia.

The casino is a big international drawcard and very popular with Indonesian and mainland Chinese tourists. Sitting at 5,900 feet, think Vegas in the clouds.

Visa and Residency in Malaysia