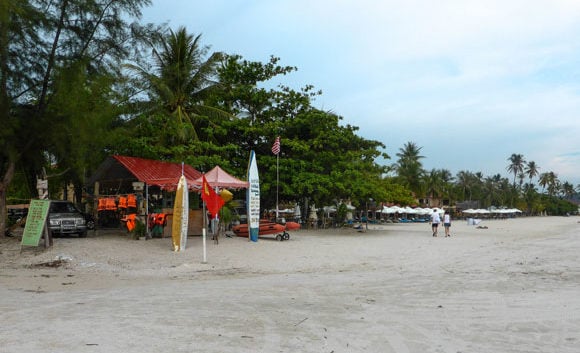 The world is getting smaller and retiring abroad isn’t uncommon anymore. Why wouldn’t you retire elsewhere if you could create a better lifestyle, lower your cost of living, embark on an incredible adventure, or make shoveling snow a thing of the past? Whatever your reasons, Malaysia just might be the place for you.

There are so many benefits to moving to Malaysia. The climate is tropical; think Florida, hot and humid with rainy and dry seasons. It’s less humid in the dry seasons and a little more humid in the wet seasons, and there are two wet and dry seasons per year. Almost everyone speaks English, in fact, it is the first business language of the country,  so it’s easy to communicate and get around. All of the road signs are also in English as well as Malay, so hiring a car as soon as you arrive and driving shouldn’t be an issue. Just remember that here, like in the UK, they drive on the left. If you are out walking about, always look right and left, and right again. There are lots of scooters on the roads here and better to be safe than sorry.

You’ll also have your choice of large chaotic cities (Kuala Lumpur), small, mellow beach towns (Kota Kinabalu), and everything in between (Penang, Ipoh, and Kuching).

The Malay, Chinese, Indian, and European ethnicities that make up Malaysia uniquely blend together, and have done so for the past 500 years. This cultural mix means that there are a lot of festivals taking place, all the time, and in reality, there are about 300 festivals per year. In fact, Malaysia has more public holidays than any other country in Southeast Asia, some 16 days per year.

If you are an adventurer, there are mountains to climb and oceans to dive in. Mount Kinabalu, in the state of Sabah, is the highest mountain in Malaysia rising to some 13,435 feet. It’s cold at the summit! Kinabalu National Park is also a protected UNESCO Heritage Site and is listed as the 20th most prominent mountain park in the world. Tunku Abdul Rahman National Marine Park comprises some five islands, very close to Mount Kinabalu, where you can dive and snorkel until your heart is content. It’s the perfect mountain and beach combo holiday anywhere in Asia.

Malaysia is also known for its delicious street food scene and coffee culture and if you like to travel, there are direct flights to more than 30 different countries from Kuala Lumpur and Penang international airports.

Malaysia has a retirement visa option that is one of the best in the world. “Malaysia My Second Home,” or MM2H as it’s known locally, grants expats a 10-year multiple entry visa, that is automatically renewed on its expiry at the end of the first ten years.

Anyone over 50 years of age must deposit RM150,000 ($34,883) into a bank in Malaysia of your choice (Citibank, HSBC and Standard, and Chartered seem the most popular), or prove you have a monthly income of RM10,000 ($2,350) from a government pension. If you have the government pension then the deposit wavers. If not, then you will also have to prove that you have a monthly income from investments of RM10,000 ($2,350). Keep in mind also that any money that you bring into the country is tax exempt. For the sake of the visa, you also must be in good health, you will have to pass a relatively easy medical when you arrive, and not have a criminal record.

With the MM2H visa, after one year, you can withdraw RM50,000 ($11,627) for the purchase of a car, your children’s education, medical expenses, or to buy a home. Malaysia is one of the few places in Asia where you can buy property freehold.

The cost of living in Malaysia is a fraction of what it costs in most Western countries. And that isn’t because you live in a grass hut without air conditioning in the middle of nowhere…in fact quite the opposite. On $2,500 per month, a couple can live large, without sacrificing life’s little luxuries like massages and eating out. An hour massage starts at $15, a pedicure at $13, and a cleaning lady is $5 an hour. A 2,300-square-foot, modern three-bedroom condo with a pool and small gym, overlooking the Straits of Malacca rents for only $900 per month.

You’ll get a bargain if you go local and buy most of your groceries at the wet markets. A large bag of local bananas, mangos, papayas, pineapple, and watermelon will only cost about $8. Eating out is so much fun and can be done for as little as $2 for a plate of noodles mixed with chicken and vegetables, and $10 for a whole steamed fish. Even the fancy international restaurants are more affordable than home. In Penang, an island off the west coast of north Peninsular Malaysia, you can find set menus with three courses starting at $12, and fresh homemade pasta and pizzas from $15.

For years, people from all over Asia have traveled to Malaysia for top-notch healthcare at affordable prices. It’s high-quality healthcare at a low cost, so most expats pay out of pocket unless it is something major. The majority of the doctors were trained in the U.S., UK, or Australia and all of them, including the nurses speak very good English. An overall health screening which includes a physical, blood work (43 different tests), exercise stress test, ECG, chest X-ray, abdomen ultrasound, BMI, and a vision test, starts at $60—just the blood work alone would cost more than that in the U.S. A general doctor’s visit is $15 with prescriptions costing even less. A dental cleaning at a modern friendly office starts at $25.

There are plenty of international grocery stores around as well, Tesco is one of the more popular ones, and you don’t have to forfeit your little tastes of home, like good cheese and French wine. In all the major cities, there are movie theaters playing the latest Hollywood flicks, and fantastic air-conditioned shopping malls to get your retail fix.

Making friends and meeting new people in Malaysia is easy. The locals are kind and curious about what expats and tourists think of their country. They are proud of being Malaysian, and second to asking where you are from, is the question, “have you eaten yet?” Food is a crucial part of the culture throughout Malaysia, so it isn’t uncommon for your taxi driver, store clerk, or hair stylist to tell you where to go for the best plate of noodles.